I Produced My Week as a Muslim to Educate, Not Offend 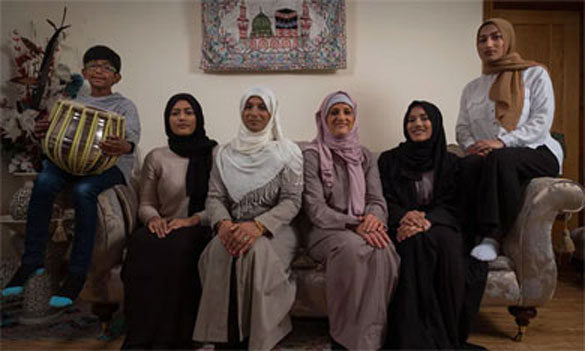 Channel 4’s My Week as a Muslim. ‘We hoped that people who shared some of Katie’s (third from right) views would go on the journey with her.’ Photograph: Matt Squire/Channel 4

The idea for making the documentary My Week As a Muslim came to me after I spent almost a year in Birmingham, filming a series for Channel 4 called Extremely British Muslims in and around Birmingham Central Mosque.

Towards the end of our time there, the Brexit vote happened. Almost immediately, there was an English Defence League demonstration outside a mosque in Birmingham, and the number of attacks on Muslims spiked dramatically. We only managed to capture a small part of this, but in the coming weeks there were reports seemingly every day about hate crime, and articles on Britain’s diverse but divided communities – living parallel lives but not integrating.

I wanted the new show to bring to a wide audience the harsh realities of what was happening. We wanted to do something bold and experimental to achieve this. Often, when making documentaries, you feel you are preaching to the converted. I was determined to make something that would reach people who wouldn’t normally watch a programme about Muslims.

When we were in the research phase of production and looking for contributors to take part, I was genuinely shocked at some of the opinions I heard from white Britons. Emboldened by the referendum results, people were openly hostile towards Muslims, saying things I never thought I’d hear again.

Like Katie Freeman – our main contributor, who puts on makeup and changes her clothes in order to pass as a Muslim – many of those we spoke to were not aligned to a far-right organisation. Instead, they were ordinary people who just had very little or no exposure to Muslims. The only information they had was from newspapers and TV reports. Many were very fearful of Muslims and felt strongly that their way of life was under threat. They felt their voice wasn’t heard in the mainstream media.

When we found the Alvi family, we knew straight away we had found the right Muslim family for the programme. Saima Alvi is a strong, independent woman who I believe goes against the stereotypes people have, and we were over the moon that she wanted to be involved. She had lots of questions, as we expected, but we worked out the boundaries of the programme with her. One of the first things we did was meet the imam from her local mosque and the chairman of the local British Muslim Heritage Centre – a local community organisation that Saima is heavily involved with. We discussed our idea in detail with them to make sure they were happy with what we wanted to do. They immediately recognised our purpose and gave us their full support.

When we met Katie, she had very strong views about Muslims: that she wouldn’t want to sit next to a Muslim on a bus; how she was fearful of women wearing the Niqab. But she also wanted to try to understand the Muslim community and had a genuine desire to have her preconceptions challenged.

We hoped that people who shared some of Katie’s views would go on the journey with her. I think the disguise element was an absolutely crucial part of this.

“Blackface” or “brownface” has historically been used as a form of entertainment to mock non-white people. This film is the antithesis of that. Its purpose is to inform and promote understanding between communities, not to caricature them. The Guardian reports a 500% increase in hate crimes against Muslims since the Manchester bombing. Things are bad.

The reason for the prosthetic nose, teeth and contact lenses was simple – to make Katie look and feel different, so she could go unrecognised in her home town, convincingly experience what it’s like to be a Muslim woman, integrate her into her host community and experience it from within.

Of course she would have got the chance to talk openly with Saima regardless. Saima created an inviting environment for Katie where she felt no question was off-limits. But as a result of the disguise, Katie also got to experience racism first hand as “us” not “them” – a truly shocking moment for her.

We started filming the day before the Manchester bombing. After that happened, everyone was shaken and we questioned whether we should continue. Katie, dressed in hijab, felt very vulnerable. But after discussing it with Saima and Katie, and with the support of Channel 4, we chose to continue – feeling her contribution could be more valuable than ever. Even being out in public with Saima and Katie was difficult and I myself was on the receiving end of racial abuse for the first time in many years.

People have suggested that we could have used a different approach – such as giving Muslim women hidden cameras to show their experiences. This has been done before, and we wanted to try something different.

Something you are taught as a Muslim from a young age is that intention is the foundation of every action. We were very clear what our intention was in making this programme, and I believe we achieved what we set out to do.