The Supreme Being is thousand-headed,

He pervades the Universe on all sides,

And extends beyond the ten directions. 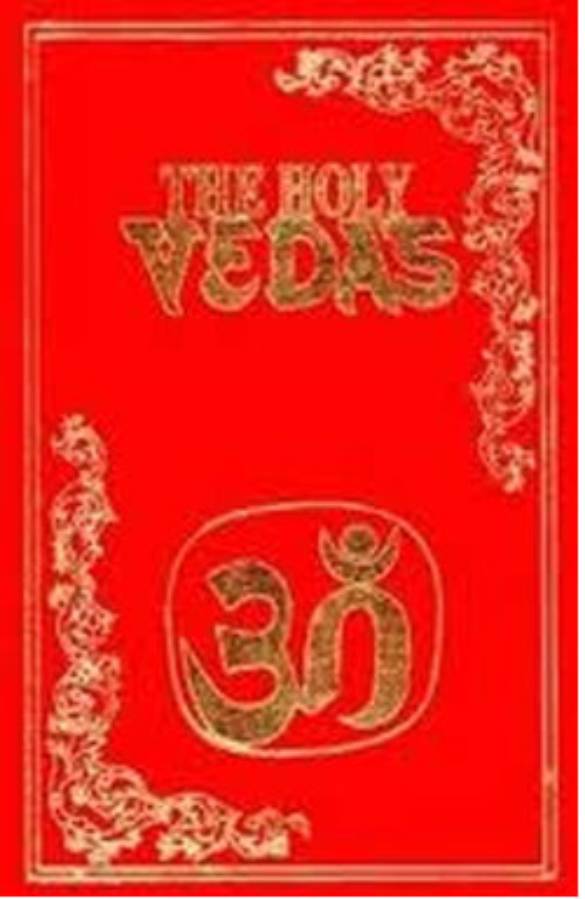 He, indeed, is all this,

What has been and what will be,

He is the Lord of Immortality

Such is his magnificence, but

The Supreme Being is greater than this;

All beings are a quarter of Him,

Three-quarters make up immortality in the

Three-quarters of the Supreme Being remain abstract,

And, diversified in form, it moves

To the animate and the inanimate world.

Through the divine energy of the Supreme Being

In the course of the evolution of the universe, the

earth and other habitable planets came into being

And souls manifested themselves in the form

of living beings and thus life came into existence.

With the coming into being of the dynamic universe,

The adaptation of the primordial matter was made in the primeval activities.

Thus began the changes in the atomic composition of matter.

In this colossal cosmic sacrifice, substances to sustain life were produced

As well as vegetation, grains, fruit, flowers and therapeutic substances that increase both energy and the life-span.

This made it possible for animal life to thrive.

In the course of the creation of the universe,

the Atharva Veda were revealed.

Three kinds of animals came into being in the creation of the universe.

Belonging to the category of domestic animals were four types of animals:

Because of his superior intellect, man is recognised As the most advanced of all living beings

That came into existence at the creation of the universe.

Among them were also those who displayed divine qualities

Well-versed in the knowledge of the Vedas

Who contemplated intensely on how to integrate and organise society.

The entire human race was visualised in the form of one human being.

Some of the questions were:

Into how many parts was this man-conception society divided?

What was his mouth? and what were his arms?

What represented his thighs and what were his feet?

In this conception of human society as a man, the highly intellectual Brahmanas (priestly class) were regarded as the mouth,

While the Kshatriyas, who were the administrators and warriors, represented the arms.

The Vaishyas who were artisans, traders and agriculturists corresponded to the abdominal region and the thighs,

While the Shudras of the society were associated with the feet of this man-conception society.

The moon denotes the mind of the Supreme Being,

While the sun His eyes.

The wind and breath issue from His ears,

While fire is produced from His mouth.

And the sun symbolises his eyes.

This universe is conceived in the form of the intangible Supreme Being.

In the idealised schematic physical map of the universe, the central region, identical with the abdominal region, corresponds to the middle space, Antariksha.

The uppermost region, synonymous with. the head, is depicted as the luminous outer space. Its lowest region correlating with the feet is identified as the earth (Bhumi).

The entire planetary system of The universe gradually evolved according to this scheme.

The Supreme Being proceeded ahead with the symbolic yajna (task) of the creation of the universe,

Of which the human race is most advanced.

Among mankind there were also seers and sages, hermits and ascetics, and intellectuals and scholars who set about the task of organising society by disciplining man, the animal.

In this imaginary symbolic Yajna or sacrifice, there were seven enclosures or disciplines and twenty-one sticks, Samidha, were utilised.

In the course of this symbolic cosmic Yajna of the Supreme Being, the scholars and sages undertook the Yajna (function) of organising society.

With this object they gave significance and priority to the formulation of fundamental laws and of behaviour that promoted social stability and cohesiveness.

The Creator is perfect

From the perfect Creator.

Let us comprehend this perfect power

That bestows life on all beings.

Bringing with her life-sustaining blessings and giving life to the lifeless, the Divine Dawn imparts her brilliant lustre to the world. The dawn of today has appeared as the last one of the countless mornings that have gone by, but she is the first among the brilliant dawns that are to come.

Since the mighty cosmic vital powers procreate you in the womb of firmament, 0 cloud-bearing thunder winds (verily, these winds are vital), you shine like the starry heavens. You, the showerers of rain, illuminate the world with the flash of lightning.

The cosmic energy grows in space unbounded. Many cosmic vapours impart strength to it. The friend of mankind, it lies there within The lap of nature's laws, Enjoying the affection of sisterly cosmic rivers. (Rig.3.1.11)

The cosmic energy is the generator of the Universe, the embryo of waters, the leader of humans, Most virile defender of the human race, It remains ever illumined by its own radiance and   It provides sustenance for its beloved progeny.

Who knows what is the truth,

Or who may here declare it?

What is the proper path

That leads to the place of divine forces?

Only their inferior abiding places are perceived,

Not those which are situated

The flames of this mighty cosmic energy descend

Of the powerful Lord of Heaven.

Its fierce flame has the power of destroying

It consumes all dross

As the fire consumes forests.

After deep contemplation and search,

The resolute seeker has discovered Thee

From the lotus-leaf lake, Cosmos,

Which is the head and support of the universe.

May Thy cosmic, energy and cosmic radiations,

Which are discharged from heaven

And traverse the earth,

Leave us unharmed, when they pass by our

O appeaser of the wind,

Thou hast a thousand medicaments,

Inflict no pain upon us.

Reposing on the raging waves of the sea

Swiftly glides over the endless canopy of the sky.

This divine melody with uniform light

Spreads over the whole world.

It dissemmiates the wisdom that inspires the brave.

And with this melody the pious devotees expand

Their field of knowledge.

The refreshing glow of Divine Consciousness sends forth each busy man to his pursuit; she knows no delay. O Dawn, rich in opulence, when you come, birds that have flown forth rest no longer.

The dawn, receives_ her beams from beyond the rising place of the sun. Borne on a hundred auras of glory, the auspicious dawn (physical and spiritual) advances on her way to men in different directions.

This immortal nature of the universe takes its place

In the hearts of mortal humans

And it also blesses them

In all their sacred aspirations.

With its spiritual radiance,

And knowing all secrets of wisdom,

Listen to the melodious music of the divine poet.

He plays upon the flute of love, the notes soar to high heaven and reach the distant stars and dance on the raging waves of the sea.

The earth, the sea, the sky, the stars are all woven together by the soft strains of the divine music.

Its vibrations echo through the corridors of time in the endless canopy of the sky.