Reconciling Islam with the Modern World 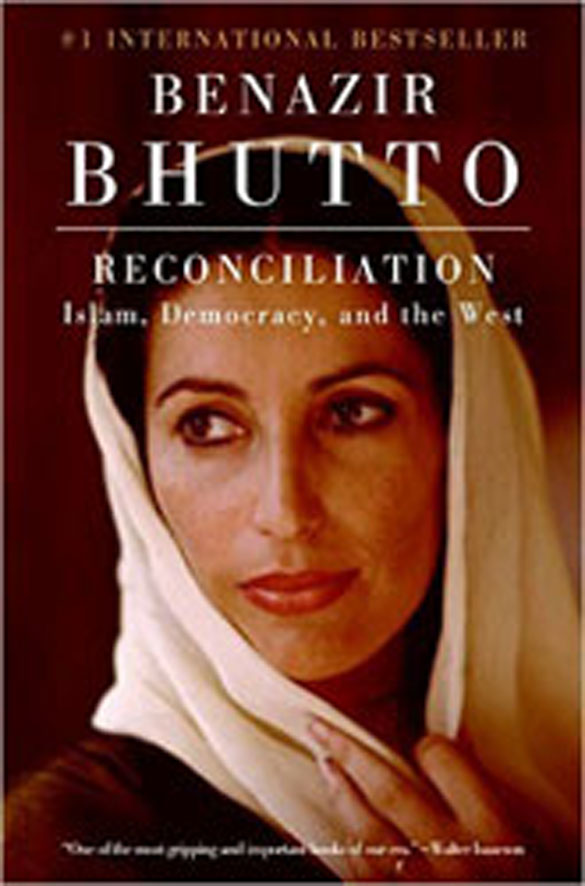 There are some important books that Muslim world should have taken better note of. They have something important to say though certain things might be objected to on both religious and philosophical grounds. Some selections from them deserve serious consideration. Such works include works of almost all the authors approvingly quoted in the last chapter of Benazir Bhutto’s Reconciliation: Islam, Democracy and the West. The problems that Benazir highlights are indeed noteworthy. She notes, for instance, that “now almost half the world’s Muslims are illiterate.

The combined GDP of the member states of the Organization of the Islamic Conference (OIC) is about the same as that of France, a single European country. More books are translated annually from other languages into Spanish than have been translated into Arabic over the past one hundred years. The 15 million citizens of tiny Greece buy more books annually than do all Arabs put together.” Another problem she notes is subjugation of women in the Muslim world that she attributes not to Islam but to  “narrow interpretations of Sharia that deliberately promote subjugation” and to “political exploitation by ideological clerics.” She illustrates her case by alluding to ban on driving cars in Saudi Arabia and points out: “Automobiles did not exist when Islam dawned in A.D. 612. Therefore the prohibition on women driving cars is all the strange.”

She argues the case for economic independence of women stating: “My father encouraged his daughters to be as well educated as our brothers and also to be economically independent. A true measure of liberation from traditional roles and traditional subordination by men is the extent to which women are economically self-sufficient. If the Prophet’s wife could work outside the home, all Muslim women should be free to work. Economic independence brings political independence, and political independence within the family encourages pluralism and democratic expression and organization outside the family.”

One might  see how chaotic and unresolved is the problem of women and women sensitive approach to Islam by recalling  the intense debate on permissibility of women leaders raised after her own election as PM (and previously by Syed Moududi’s support for Jinah’ sister) even though now many Muslim scholars have been defending pivotal role of women in politics and ingeniously explain the commonly cited tradition  against the leadership of women.

Not to speak of many perceived issues in family law and restrictions in work and travel on her own, even her head covering has been so much debated that one can easily predict that it will take many decades for the dust to settle in most Muslim lands and till then what lies inside the head mayn’t get the due attention. Her dupatta, that partly (un)covered her hair, was criticized by “secularists” as concession to regressive or conservative elements (previously she didn’t cover her head and we see all significant Bhutoo women unveiled today) and by “Islamists” as mockery of Islamic hijab. In her public appearance she took care that she is not too homely or “modest” and she kept talking about something like “enlightened moderation” that became a buzzword with Pervaiz Musharraf later. She has been a vocal critic of Zia’s Islamization project and hudood ordinance citing  the reason that they contradicted both the spirit of Islam and human rights in modern democracy.

She attempted to reconcile two conflicting paradigms – secularist and traditional – by making use of what we may call as Muslim feminist (as distinguished from “Islamic feminist”  and “secular feminist” interpretations) and inner radical interpretations of Islam.  She  had the gift of a writer as well and her Reconciliations sums up her attempt to broach two universes. I think she largely succeeds in her case for more respectful (and not necessarily uncritical) attitude towards such things as secular sciences, democracy, human rights discourse, Muslim feminism and she has brilliantly chosen some thinkers and relevant quotation to buttress her arguments. I reproduce some of these quotes from her book.

She first quotes Iqbal (whose suggestion that elected Parliament should be able to complement Ulema’s work and exercise Ijtihad appears shockingly modernist).“The law revealed by the Prophet takes special notice of the habits, ways and peculiarities of the people to whom he is specifically sent. The sharia values [ahkam] are in a sense specific to that people; and since their observance is not an end in itself they cannot be strictly enforced in the case of future generations. Let the Muslim of today appreciate his position, reconstruct his social life in the light of ultimate principles, and evolve, out of the hitherto partially revealed purpose of Islam, that spiritual democracy which is the ultimate aim of Islam.”

She also approvingly quotes Fazlur Rahman, arguably Pakistan’s most influential modern philosopher, who has been such an inspiration for a host of new interpretations including feminist one in the Muslim world: “…no systematic attempt has ever been made to understand the Quran in the order in which it was revealed, that is by setting the specific cases of the shuan al-nuzul or occasions of revelation in some order in the general background that is other than the activity of the Prophet (the sunna in the proper sense) and its social environment.” And pleads for his new approach that consists in “studying the Quran in its total and specific background (and doing this study systematically in a historical order),” against what he called atomistic approach that is largely followed by Muslim scholars which consists in “studying it verse by verse or passage by passage with an isolated occasion of revelation.” All too familiar and ready chapter and verse citations in legal manuals and much of popular stuff are targeted by Fazlur Rahman for this atomistic approach.

She then quotes one of the most brilliant contemporary Muslim philosophers Abdul Karim Soroush (whose The Expansion of Prophetic Experience is such a powerful work and a must read for any Muslim scholar tackling the problem of Islam and modernity and relevance of Sufism in our postmodern age) whose qualifications as a madrassah trained scholar are especially noteworthy : “Revealed religion itself may be true and free from contradictions, but the science of religion is not necessarily so. Religion may be perfect or comprehensive but not so for the science of religion. Religion is divine, but its interpretation is thoroughly human and this-worldly.The whole history of the sincere efforts of commentators to liberate Quranic commentary from the infiltration of external ideas has ended in one sharp and important result, namely, the practical unavoidability of such infiltration, together with its epistemological inevitability.”

She brings Muhammad Arkoun, one of the pioneering postmodern Muslim philosophers and author of influential Rethinking Islam: Common Questions, Uncommon Answers, as well into the debate: “We need to create an intellectual and cultural framework in which all historical, sociological, anthropological, and psychological presentations of revealed religions could be integrated into a system of thought and evolving knowledge. We cannot abandon the problem of revelation as irrelevant to human and social studies and let it be monopolized by theological speculation.”

Next important scholar from the subcontinent  in support of her pluralism she refers to is Maulana Wahidudin Khan who is however poles apart from Arkoun and Rahman or Soroush. She quotes from him: “Muslims mistakenly regard it as their duty to stop any visual depiction of Prophet Mohammad. This is untrue. It is the followers of Islam who are forbidden to do so in order to discourage idolatry. Moreover, Islam forbids imposing its beliefs on people of other faiths. Even in Muslim countries, Muslims cannot impose their laws or culture on others.”

Arguing for more open attitude towards philosophy and science today, she refers to an insightful historical note from Muhammad Khalid Masud: “…the fact that a movement in favor of Greek sciences continued to flourish throughout the Islamic history is by itself an evidence of Islam’s cultural compatibility. This movement generated a controversy deep into the religious issues about the nature of the Quranic revelation and the role of reason. Opposition to this movement finally triumphed as orthodoxy, but not without recognizing the necessity of studying Greek secular sciences. The science of Kalam (roughly, Islamic theology) born out of the need to refute foreign ideas was regarded as the science of Daâwa and Jihad. This science relied heavily on Greek logic, rhetoric and metaphysics. No doubt, opposition in the Muslim community to rational sciences continued, but at the same time a considerable number of Greek texts or their Arabic adaptations on Astronomy, Geography, Calculus, Mechanics etc., became part of the Muslim religious curriculum.”

Benazir’s credentials for writing on the question of Islam or its interpretation may be contested (by those who think that our primary problem is not in the domain of thinking and hermeneutics but in the domain of access to traditional texts) but what  can’t be contested is her right to read and quote from the wealth of highly relevant cutting edge scholarship. It seems she was well informed or well advised while preparing the book. She hasn’t quoted out of context. We can’t implement Islam in the modern world without first understanding the modern world and for this philosophers as diverse as Heidegger, Habermas, Whitehead and Voegelin  besides diverse Muslim philosophers from Iqbal to Nasr to Soroush may be given consideration. The question is: Are our  online eloquent youth and our daughters of the East (“Islamist” “Feminist” hijabi, bayhijabi), aware of extremely rich and sophisticated tradition of debate on issues that they seem to foreclose with all too ready opinions for and against from here and there?

Since one can critique modernism or any modern idea but can’t wish away the reality of modern world or ignore the signs of the times or God’s revelation in Time, there is no option of merely regurgitating old scholarship – a point Iqbal made in his Madras lectures. Without ignoring 14 centuries of history of engagement with sacred text we need to remember “Read the Quran as if revealed yesterday” as one important modern Muslim philosopher advised. Iqbal meant the same thing by pleading for descent of the Book in one’s conscience and recognizing the need of respectfully but critically approaching our predecessors by freely debating new approaches. We have to choose between resisting hegemony on thinking by reviving institution of consensus through communicative dialogue (as our best democrats like Habermas conceive it) that has been the essence of Ijmah or dying under dictatorships or imposed ideological States.