The Thistle and the Drone: How America’s War on Terror Became a Global War on Tribal Islam

The Thistle and the Drone

The Thistle and the Drone, How America’s war on terror became a global war on tribal Islam 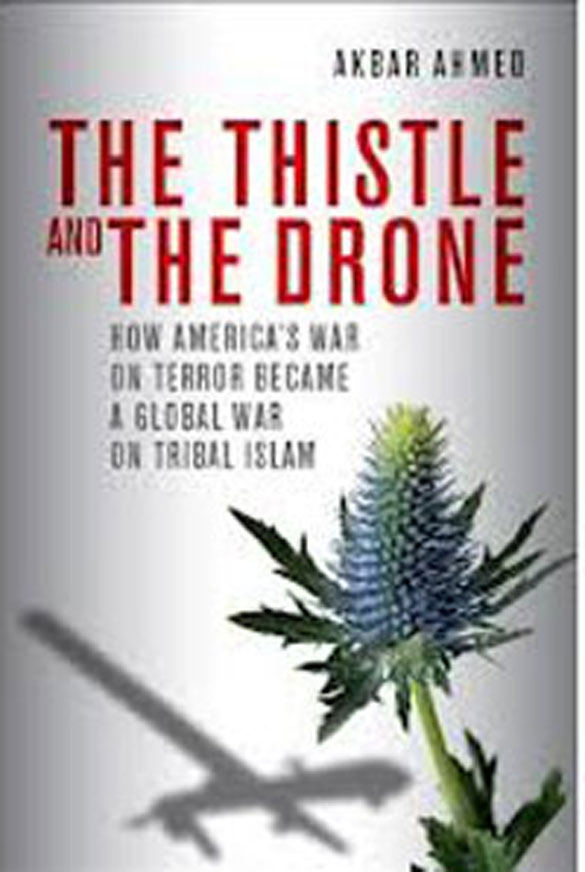 Akbar Ahmed’s new book is an impressive and provocative work of scholarship. Baffling at first, its title ‘The Thistle and the Drone’, represents his book’s effort to counter pose the drone, as a symbol of America’s ‘war on terror’, and the thistle, as a metaphor for the cactus-like defiant and tough tribal societies caught up in this conflict.

This sets the stage for the study’s central theme: that among its other deleterious consequences, America’s post 9/11 counterterrorism policy has compounded the already fraying relationship between central governments and tribal societies on their periphery. With some of the world’s most impoverished and embattled tribal groups becoming the targets of the 21st century’s most advanced “kill technology”, this has led to dangerous disruption of fragile societies from Waziristan to Afghanistan, Yemen and Somalia. The ‘fragments’ of these communities now threaten to shoot off in unpredictable directions and fuel escalating global violence.

This is Professor Ahmed’s third book in a remarkable trilogy that examines relations between the US and the Muslim world. The previous work, ‘Journey into America’, published three years ago, took the reader into the heart of America and its Muslim communities to look at their often troubled relationship in the wake of 9/11. This one draws on 40 case studies from across the world to draw broad conclusions about tribal societies and the impact that America’s counterterrorism strategy has had on them.

Professor Ahmed may not perhaps have anticipated that the publication of his book would coincide with the widening debate in America about the legal, ethical and longer-term implications of relying on drones to wage war by assassination. Hitherto confined to a handful of human rights groups and liberal think tanks, the debate has expanded in recent weeks to Congress. During the confirmation hearings of John Brennan, several senators questioned the CIA’s nominated director about the secrecy and legality of the drone war, as well as the blowback from this in many countries including Pakistan.

The leak of a US justice department memo justifying the targeted killings of terrorist suspects including American citizens brought the issue under intense media spotlight. It prompted even sharper comment elsewhere. An editorial in the Financial Times for example concluded that the US “cannot demand legality from others when it is cavalier in its behaviour.” Months earlier the UN High Commissioner for Human Rights declared that drone strikes amounted to extra judicial killings.

Akbar Ahmed’s book doesn’t so much as join this debate as point it in another direction by focusing attention on the history and dynamics of tribal societies, aspects that rarely figure in geo-political assessments. But this isn’t a book about drones. The author’s main concern is with their target: tribal societies that have become embroiled with America’s war.

Professor Ahmed, by his own admission, wants to give a voice “to the voiceless – the suffering of ordinary people on the periphery, who go unheeded and unheard”, caught between drone attacks, suicide bombers and assaults by the centre’s military and law-enforcement agencies.

The author, who now teaches at Washington’s American University, draws on his long experience as a civil servant including as political agent in Waziristan, and expertise as an anthropologist to present what he calls the Waziristan model. This rests on the three pillars of leadership in tribal societies – tribal elders, religious clerics, and the political agent as representative of the central government. He laments its virtual breakdown, attributing this to a process of decay and combination of US actions and Pakistan’s ill-thought military incursion into Waziristan in 2004, which he says ended in disaster. Drone attacks have further thwarted any prospects of peace between the central government and the tribes of Waziristan.

“The Waziristan I knew lies in ashes”, he writes, “with drone strikes bringing death, global media depicting this land as the nursery of terrorists while denying it a voice, national leaders never visiting or seeming to care for the population’s plight and suicide bombers from the community relentlessly tearing it apart.”

It is in this chaotic and traumatised environment that the Tehreek-e-Taliban Pakistan (TTP) has been able to move in and operate. “Its primary target was the model itself, and it systematically attacked each and every one of the pillars.” Professor Ahmed believes that had these pillars not been destroyed, the TTP would have been effectively contained. From this he concludes that in order to neutralise the TTP and prevent similar future eruptions, the model has to be “painfully, slowly but surely recreated with suitable adjustments for democratic enfranchisement.”

One might take issue with his portrayal of the Waziristan model as nostalgic yearning for an idyllic and romanticised past. Also open to question is the feasibility of his suggestion to revive the model in order to restore peace. His analysis shows how the model’s three pillars of authority have all but been swept away by the violence and mayhem of the past decade.

Nevertheless Professor Ahmed’s insights into tribal history, customs, code of conduct and the predicament of tribes beleaguered from all sides make for compelling reading. So do the episodes and anecdotes from colonial history he narrates in fascinating detail in the book.

He describes with much empathy the plight of the tribes, and their historical resistance to attempts by the centre to establish its authority – efforts he casts as “desultory, often haphazard and invariably resulting in failure”. Washington, he argues, has failed to understand not only the nature of tribal society and its notion of honour and revenge, but also the historically fraught relationship between the centre and periphery, which its actions have ended up dismantling.

Nor, he claims, is there acknowledgement by America that its current policies are only exacerbating this conflict. The assaults on tribal people have caused traditional tribal and Islamic behaviour to mutate, as witnessed in the bloody and frenzied suicide bombings of schools, mosques and symbols of central authority. Violence has provoked ever more violence. Even with Al-Qaeda decimated, the US has drifted into a global war on tribal societies on the periphery of nations.

Professor Ahmed’s principal concern is with how to resolve the conflict between centre and periphery and end the war on terror to re-establish peace and stability. For things to change, he makes an impassioned case for “modern society to understand the context and history of conflicts and not impose an artificial external frame or ideology on to them”. And he emphasises the need to work through, and not against, tribal structures to rebuild those communities for lasting peace.

Professor Ahmed’s book examines the metanarrative of a ‘clash of civilisations’ and ‘Islamic extremism’ as explanations for terrorist violence only to reject them. These ideas, he says, shaped America’s counterterrorism policy and ended up conflating the threat from groups that had little to do with Al-Qaeda. More than ten years later these mistaken notions have sucked the US into “fighting the wrong wars, with the wrong tactics.”

While critiquing US policy Professor Ahmed also refers approvingly to lessons that can be learnt from America’s own management of relations between the centre and the periphery. Notwithstanding the past “genocidal treatment of the Native Indians and cruel treatment of African Americans”, the US federal system has over the years allowed “its people to participate fully and benefit as equal citizens while maintaining”, as the cases of Hawaii and Puerto Rico illustrate, “their own local culture and heritage.”

For the author “healing a fractured world” rests on finding a way to co-exist with the thistle while abandoning the approach epitomised by the drone, which puts it beyond law and morality, and is at the very least counterproductive. Whether or not the reader agrees with this complex but exciting and stimulating study, its important insights and information are sure to be discussed for a long time to come.

Dr Maleeha Lodhi is special adviser to the Jang Group/Geo and a former envoy to the US and the UK.