Dr. Muzaffar Husayn Nadvi On Contribution of Kashmiris To Arabic Language and Literature 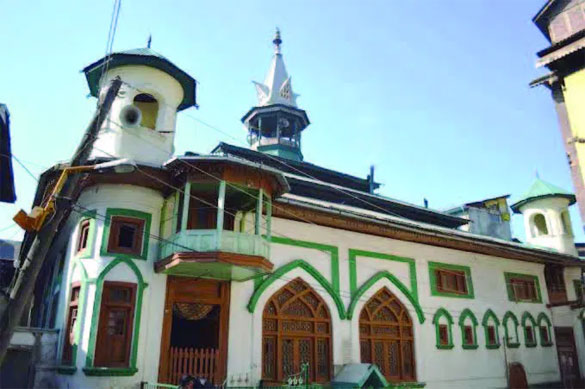 The above book is basically a doctoral dissertation of Dr. Muzaffar Husayn Nadvi, one of the prominent scholars and prolific writers of Arabic language and literature. After necessary additions, alterations and modifications, the author has himself got it published in 2004.

The stimulus for researching on this topic according to Dr. Nadvi was that during his studentship at Nadwatul Ulama Lakhnow, one of his teachers tauntingly said that after Allama Anwar Shah, Kashmir has turned sterile. This remark struck his heart. Consequently, he made up his mind to do research on the contribution of Kashmiris to Arabic language and literature. After some years when he was selected for Ph. D at the University of Kashmir, he opted for the same topic limiting it to the period 900-1300 A.H.

In his letters to the author, Maulana Abul Hasan Ali Nadvi writes, “I was pleased, and astonished as well, that so much information has been assembled in this book. In spite of having acquaintance of and impressed by several great personages of Kashmir, I was unaware of the fact that this region has been the birth place of so many accomplished scholars as for as Arabic language is concerned.”

In addition to the prolegomena by Maulana Ali Miyaan Sahib, preface by the author, the book has six chapters and a comprehensive bibliography. In his brief preface, Dr. Nadvi has highlighted a very important aspect of scholarly and academic interactions and relations between the Ulama of Delhi and Kashmir during the period under discussion. For example, Shah Wali Allah had dozens of Kashmiri students. On the other hand, Maulana Mamluk Ali al-Nanotavi and Maulana Mazhar ibn al-Shaykh Lutf Ali were the pupils of Maulana Rashid al-Din al-Kashmiri. The mujaddid Shaykh Ahmad Sirhindi had the honor of being a student of the genius scholar of Kashmir Maulana Shaykh Yaqub al-Sarfi. Similarly, Maulana Qasim Shah al-Nanotavi (founder of Darul uloom Deoband), Maulana Abd al-Rashid al-Gangohi, Sir Sayyid Ahmad Khan, Maulana Mazhar al-Nanotavi and Maulana Khayr al-Din (father of Maulana Azad) were the students of Maulana Sadr-al-Din Aazurdah al-Kashmiri. Genius poet like Mirza Ghalib was one of the beneficiaries of this great Mufti Aazurdah of Kashmir.

In the first chapter, the learned author has written about the geography of Kashmir-its lakes, rivers, mountains, latitude and longitude have been discussed. In addition to the local authors, he has also quoted from European travelers and scholars over from China. He has listed the Arab historians and geographers who have written about Kashmir. He has also quoted from Mughal rulers of Kashmir who were enchanted by the bewitching beauty of Kashmir. A poem of Iraqi traveler Prof. Faisal Muhammad Hasan al-Khaalisi has been cited in which the poet calls Kashmir “Jannat al-Ardeen”. Divergent viewpoints have been propounded regarding the origin of word, “Kashmir”, very interesting and full of information. A full -fledged discussion has been done in this chapter about the Kashmiri language and literature. Representation has been given to the leading poets and personalities of different periods. Mention may be made of only a few like Shaykh Noor-al-Din al-Noorani, Lalla Aarifa, Dina Nath Naadim, Mirza Aarif, Abdul Ahad Azad, Faadil Kashmiri and Rahmaan Raahi.

The second chapter deals with the inception of Islam in Kashmir. Quoting from the sources, it has been shown that Islam entered the Valley in 97 A.H., some 350 years before the arrival of Bulbul Shah from Turkistan. During the Shahmiri period of Muslim rule in Kashmir, Sultan Shihab-al-Din for the first time established Madrasat-al-Quran in Kashmir. Similarly, Sultan Qutub-al-Din constructed the first residential college at Langarhatta, Srinagar, where teachers and students would stay together in the pursuit of knowledge without any difficulties. Again, a great King of this dynasty, Zayn al-Aabideen Badshah, established a University at Nowshehra, Srinagar. Here, he also set up the Daar-al-Tarjumah, where Arabic books would be translated into Persian and Kashmiri. Delegates were sent to other countries to purchase works on different subjects and disciplines. It is note-worthy that the King Zayn-al-Aabideen sent a scholar to Makkah to copy the “al-Kashshaaf” of al-Zamakhsheri. This institution was reckoned as one of the leading libraries of Central Asia and Iran.

The second part of this chapter deals with the great Sufi saint of Iran namely Sayyid Ali-al Hamadani, who came to Kashmir in 783/1384 with a large number of his followers. His activities for the propagation of Islam in this region have been elaborated. Historians say that at the advent of Sayyid Ali Hamadani, “the Muslim Sultan and his Muslim subjects flocked every morning to the nearby temple. The Sultan even participated in the Yagna ceremony once so as to avert a famine. Sayyid Ali addressed himself to the task of first reforming the Sultan. He made the King Qutub al-Din conscious of his obligations and it was on his advice that the Sultan divorced the eldest of his wives as he was having two sisters at a time as wives. The Sultan was also advised to discard the Hindu dress and instead wear the dress which was in vogue in Muslim countries. Gradually, other Muslim subjects of the Sultan also adapted themselves to the Muslim way of life”. The process of Islamization in Kashmir gained momentum which continued for centuries and Kashmir got transformed into a dominant Muslim majority region.

Sayyid Ali Hamadani was not only a Sufi saint of highest order but a prolific writer in Persian and Arabic. In Arabic, he has authored and compiled some twenty-four (24) works of varying sizes, the list of which the learned author has provided in his book. Among his Arabic compilations, “al-Awraad-al-Faathiyyah” tops the list so far as its popularity among the masses is concerned. This is undoubtedly a bouquet of prayers and teachings about Tawhid which the Sayyid directed the Muslims to recite daily and loudly in the mosques after Fajr prayers so that the Tawhidic teachings of Islam will be memorized by common and generally illiterate masses. This practice continued for centuries and even now it is recited in considerable number of mosques in Kashmir. The “Awraad” has been published many a time and translated into English, Urdu by several authors. The learned researcher has given its crux in chaste Arabic which enthralls the reader. Its popularity can be gauged by the fact that exceptions apart, along with the Quran, a copy of this booklet is necessarily available in every Muslim household for recitation.

There has been a divergence of opinion about the number of visits of Sayyid Ali al-Hamadani to Kashmir. Some historians are of the view that he visited only once, while others opine that he visited thrice, and yet one scholar has claimed that Sayyid arrived here four times. The biographers, hagiographers and historians, who lived nearer to his times believe that he visited Kashmir only once, but the latter hagiographers who lived hundreds of years after the Sayyid claim that he visited thrice to the Valley. Our learned author, depending on the secondary sources has accepted this very opinion. It is strange that the libraries, where the author has spent years to collect his material, have those authentic manuscripts available, which throw ample light on this issue. It also seems that the well documented works of contemporary historians of Kashmir like Prof. Muhammad Ishaaq Khan, Prof. Abdul Qayyum Rafiquee and Muhammd Ashraf Wani have not been taken into consideration.

The third chapter deals with the Arabic works written during the 9th and 10th centuries of Hijrah. Among them, the names of al-Shaykh Yaqub Sarfi tops the list. Important information has been provided about his incomplete and unpublished exegesis, Matlab-al-Taalibeen (a complete manuscript is believed to be in Pakistan). Some other titles of his Arabic compilations have been listed as found in the biogeographical works of the sub-continent. Dr. Nadvi has quoted from his Arabic poetry to show command over the language and depth of his thought. Besides, as a politician, Sarfi took an active part in the politics of his times to settle down some important issues of his period. Our author is of the opinion that al-Sarfi resembles with Maulana Anwar Shah Kashmiri so far as his scholarly status and style, forceful oration, critical approach towards the different and sometimes contradictory narratives and defending of Islam is concerned. In the same chapter, “Kitab al-Arba-een Hadith” of Maulana Yaqub Kashmiri and “Sharh Shamaayil al-Nabavi” compiled by Muhammad al-Kashmiri have been introduced.

Scholars and poets belonging to the 11th century, A.H have been introduced in the fourth chapter. Their Arabic works as well as their Arabic poetry has been highlighted. Prominent among them are: Maulana Muhammad ibn al-Shareef al-Naqshbandi al-Rafiquee, Mulla Tayyib, Mulla Naazuk and Muhammad Yahya ibn Mu-een al-Din al-Naqshbandi. Among all the writers, Mu-een-al-Din-Naqshbandi outshines for his contribution to Arabic Tafseer Literature. His Arabic exegesis titled “Zubdat al-Tafaaseer” is a commendable contribution to the subject.  Dr. Muzaffar Nadvi deserves applause for his painstaking work of editing, examining and verifying the manuscript of his exegesis and adding necessary foot notes wherever necessary. So far, four volumes (up to the Surat-al-Anbiyaa) have been published by him from 2009 to 2013 CE.

In the fifth and sixth chapters, dozens of contributors have been accommodated. Due to the paucity of space only the following can be mentioned:

In 2008, the second volume of this book was published by the author covering the Arabic scholars, litterateurs and poets belonging to the 14th century A.H. The author without any bias and prejudice has given full representation to every shade of opinion. Scholars belonging to the different schools of thought and sects have been accommodated. More than two hundred personalities have been introduced which include some contemporary scholars also who have devoted their lives to the teaching of Arabic language and literature and are with full enthusiasm guiding the scholars in their research pursuits.

No perfection has been claimed in this work as it is humanly impossible. Hundreds of compilations and manuscripts have been destroyed and disappeared from the scene due to the vagaries of time. Furthermore, the dynasties which are repositories of manuscripts in Kashmir, unfortunately do not cooperate with the interested researchers. They are even not willing to show the manuscripts in their possession. It seems that they prefer to get them consumed by the termites rather than bring them to the light of the day and get them scrutinized, edited, annotated and published for the benefit of posterity.

Our author’s 80% work also is based on the manuscripts scattered over in various government libraries of Jammu and Kashmir and in personal possession of the people. He had to undergo a lot of difficulties to have even a cursory glance over the manuscripts. But his determination helped him to cross over all the obstructions in his way and hence the book of this standard is in our hands. However, it goes without saying that this two-volume contribution of Dr. Muzaffar Husayn Nadvi, is first of its kind and deserves every appreciation. This will definitely prove as a reference book for future researchers on the subject.

Original Headline: Contribution of Kashmiris To Arabic Language and Literature