Shaikh Nur-ud-Din Nooran: God Is both Immanent and Transcendent 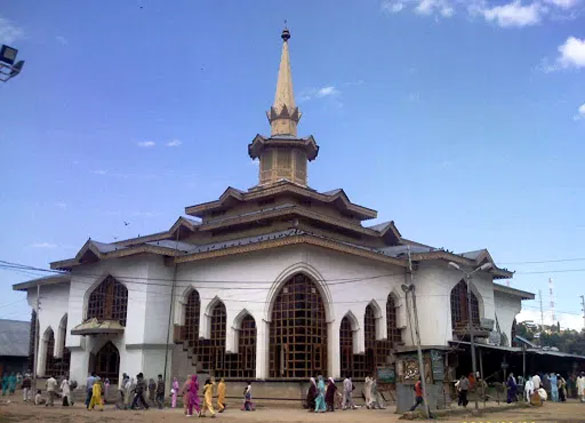 Kashmir from times immemorial has remained seat of great Rishis and Sufis, owing to this reason Kashmir is popularly known as Pirvir, the garden of spiritual guides. In fact there lived saints in this land from the very beginning. But the effective and systematic Rishi movement is attributed to Nundreshi, that is 15th century A.D. The great Rishi in his lyric has also made mention of the earlier Rishis and has given even the names of few reputed Rishi who lived before him, but the Rishi movement of Kashmir is attributed to him. He is regarded as the patron founder of this movement. Besides being a leader of the Rishi movement in Kashmir he was also a great Sufi poet. His fame as a saint and glory of his spiritual attainments travelled far and wide attracting a great number of followers. He uttered hundreds of sayings which furnish Kashmiri literature with gems having both terrestrial as well as celestial meaning, and are stamped in people’s memories

Shaikh Nur-ud-din Noorani (R.A), celebrated saint of Kashmir, is known by many names; for few he is the Alamdar-i-Kashmir (Flag bearer of the people of Kashmir), for others he is “Nundreshi” the pious saint while others call him “Shaikh-ul-Alam” the spiritual preceptor of the world. Shaikh Nur-ud-din Noorani (R.A) is undoubtedly the top personage of the spirituality in Kashmir.

His poetry at occasions appears interpretation and explanation of various verses of the Holy Qur’an. He started his sojourns in caves and tried to reach the ultimate truth by spreading the path of spirituality. Later on he travelled throughout Kashmir and ultimately settled at Charar-i-Sharief  which was his final destination. It was here that he met with Mir Muhammad Hamadani and after some discussion received a letter of guidance from him. Commonly known as Khat-i-Irshad, in which he was asked to return with the principles of Islam and Sunnah. Thus he did not remain confined to the cave, but took an active part in spreading the teachings of Islam. He craved for a society which is based on ethical values of Islam and justice. He was conscious about the social ailments, which the Kashmiri society was suffering from at that time. He visited the greater part of the Kashmir valley, and that a number of villages still preserves the tradition of his visit in one form or another, testifies to his missionary role. His message is universal and simple. Most of the verses of the Shaikh depict the transitory nature of the world, intense love for the Prophet Muhammad (pbuh) and the caliphs of the Islam, and brotherhood, irrespective of caste, color and creed. His teachings included; say good, do good, think good, give charity, be honest and upright, fight the evil, endeavor to search, and attain the truth, and live life like a Muslim. The overall message is for the welfare, uplift, equity and equality of mankind. His sayings not only provide a deep insight into history or make one aware of the real teachings of Islam but these sayings act as a source of soul purification and mental alleviation.

Because of his charismatic and saintly personality, persuasive teachings and strong abhorrence of worldly things, Shaikh Nur-ud-Din won many conversions to Islam, the most significant being Bhum Sad, a prominent brahman ascetic, Zia Singh, a descendant of the royal family of Kistwar and Ladi Raina, the chief of pargana. Bhum Sadh was named as Bam al-Din, Zia Singh as Zain al-Din and Ladi Raina as Latif-al-Din. It may be mentioned that Bam al-Din, Baba Zain al-Din, Baba Latif al-Din and his other immediate disciple Baba Nasir al-Din became the four prominent Khulfa of the Shaikh, who like their spiritual preceptor chose to live away from the hustle and bustle of life and won many followers. Thus a big brotherhood of Rishis was created who carried on the mission of the Shaikh generation after generation.

Understanding Shaikh Nur-ud-Din’s poetry means understanding the language of his times, says Prof. Shafi Shouq. “The Shruk is grounded in the phonological, semantic and semi logical structure of the 15th century Kashmir: no approach other than linguistic, can, therefore, be reliable in understanding and evaluating the Shruk”.  He was very much concerned about the artistic and aesthetic elements and chose complete, compact, crispy, clear and proverbial style for his poetry.

Nur-ud-Din gives evidence of his belief that God is both immanent and transcendent. He is everywhere, not confined to one place or another. According to him, all the branches of knowledge are nothing but the commentary upon the proclamation of faith. “There is no God but Allah.” If one truly seeks for God, he says, everything but Allah becomes worthless. One who recognizes himself, recognizes God: ‘when I was able to recognize my own self, I was able to recognize God; but loss and gain became identical to me and the distinction between life and death disappeared. He once told his mother: “God was and is and shall be for ever; he is independent of all other creatures; he lacks nothing.” Further, he says: “There is no God but with a hundred names, there is not a single blade of grass, which does not worship him.” He further says: “First I became certain that there is no god but Allah, then I made myself (acquainted with) divine revelations. First I forgot myself and yearned after God, then I reached la-makan.

The Shaikh also impressed upon the people that the more they learnt about the deeper content of the kalima, the more they would become conscious of the sin of worshipping a multiplicity of deities. It was in the context that while criticizing the animistic beliefs of his compatriots, even though undergoing the process of Islamic acculturation, the Shaikh remarked: “O Pandit, the brother: O Pandits: How long will you remain wedded to the worship of stones and springs? Your thoughtless search did not bear any fruit; Submit yourselves to the Lord and his messenger; Aren’t your solicitous of (spiritual and worldly) success?”

Nur –al Din’s Shruk in which he defines the eminence of Allah: Suy ous ti suy aasy, Suy suy kar zi ha zuwoo, Suy saari andesh kasy, Ha zuwoo payas peto (He was and He shalt be, May for Him my dear-self be, Alone, He wilt remove thy fears and doubts, Be perceptible to some extent O, me!). It proves that Shaikh was promoting Islamic beliefs in a beautiful way to the people through Kashmiri language. He at the same time was very much eager in reforming the beliefs of the people in larger extent that can be noticed through his poetry.

Besides his poetry, he discussed the word Ibadah in his poetry as well. When he says: “Kus yi chey kun begarzi, Kash aasi dilas tiyout wusath, Jannatiki hawsi ti dowzakhni bayai, Daiy chey karaan ibadat. (Who shalt invoke Thee with a selfless supplication. Who would have a magnanimous faith. It is either with the fear of hell or love of paradise. That all worship Thee, for their own good My Lord).

Nur-ud Din wanted every individual to inculcate in them good morals. He tried to mould the character of his people upon ethical values. He says about the virtue of sincerity in these following Shruks: Su chuni wechan qelas ti qaalas, Su chu wuchaan dili kis halas kun, Zikr haq par zeou dith taalas, Dev raaz haenz yi zaalas kun, (Gaze not He, by thy debates and discussions, The state of thy heart does He observe, Let thou invoke Him with tongue compressed to thy plate, possibly the phoenix may be entrapped).

While concluding, it can be said that Nur ud-Din (R.A) was one of the greatest Sufi poets and religious scholars of the sub-continent. His teachings are grounded in the Qur’anic ethics of humanism and reciprocal love. He not only sustained rich Islamic tradition but also united the race to follow the right path without falling prey to ritualism.