The Unravelling: Pakistan in the Age of Jihad 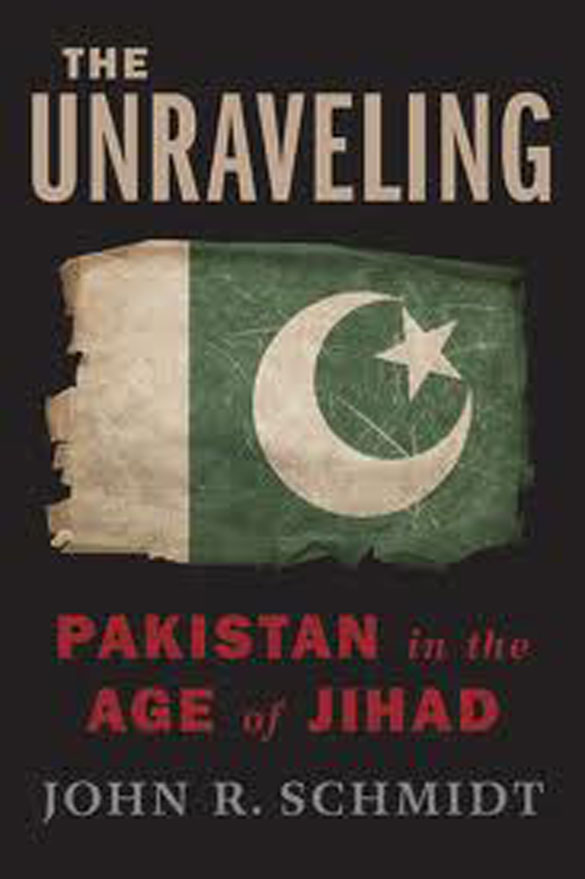 The Unravelling: Pakistan in the Age of Jihad

If one were to conduct a word association experiment today, and the word given was Pakistan, the statistical odds for the corresponding association being ‘terrorism’ would be overwhelming. And that with good reason, is made alarmingly clear by John Schmidt’s excellently researched and formidably well-informed book.

Very few books of this size (the text is no more than 233 pages) have managed to chart the course of a country’s history from its troubled birth in 1947 to its frighteningly precarious present as succinctly and comprehensively as this one. From Jinnah’s dream of a secular (in its original meaning, not the sub-continental one) homeland for South Asian Muslims to the contemporary Islamic terrorist nightmare the saga unfolds in an inexorable, almost fated descent into anarchy, mindless blood-letting and spiralling chaos.

The book begins with five events, in the manner of cinematic freeze frames: a) the elaborate security orchestrated arrival of President Clinton in Islamabad in an unmarked aircraft in 2000 b) the brutal killing of the journalist Daniel Pearl in 2002 c) the assassination of Benazir Bhutto in 2007 d) the 26/11 Mumbai outrage and e) the attack on the Sri Lankan cricket team in 2009. Using these five as dramatic preludes the author steps back into the past to the origins of Pakistan which he calls an ‘improbable state’, founded by people whose own origins were far removed from the land and the inhabitants which would form that state. Jinnah’s secular vision and his western democratic orientations were a strange implant in a land feudal since antiquity, where the social structure was based on landlord-tenant relationships knit into close patronage networks, and where indigenous laws and justice were of the rough and ready kind. The concept of a modern democratic state founded on western franchise and electoral principles was completely cross-grained to the prevailing weft of the land. If one added a fundamentalist monotheistic faith, even in a watered down Sufi version, the resultant infertility of the soil precluded the laying down of any lasting roots.

Inevitably even in the sporadic intervals of electoral experiments there was no real state attempt at either public welfare or the building of secular social structures. Instead, the political parties were nothing more than the old patronage networks under a different nomenclature, whose priorities began and ended with the distribution of favours and government largesse to their clients and constituents, to say nothing of filling their own pockets. Public welfare measures like compulsory education and health care were nowhere on the parties’ or the government’s agenda.

The army on the other hand was the only professional institution in the country, free of corruption and civilian feudal compulsions, and it wasn’t long before Ayub Khan established its ascendancy under his dictatorship, helped not a little by the first two military misadventures against India in Kashmir in 1947 and 1965. However, while the Kashmir issue never reached a satisfactory conclusion, the latter operations somewhat soured Pakistan’s relations with her oldest ally the United States, inasmuch as Ayub Khan’s hardware was rendered useless when the US stopped the supply of spares. American diplomatic and logistics support during the Bangladesh operations in 1971 was considered too little too late since the aftermath of that war was dismemberment of the country. The country reverted briefly to civilian rule under Zulfikar Ali Bhutto, only to be taken over by another general Zia ul-Haq, the former’s one-time protégé who lost little time in getting rid of Bhutto through a judicial assassination. If the US was unhappy with Zia to begin with, the Bhutto murder effectively deep-froze the strategic relationship between the two countries.

In many ways Zia’s reign marked the beginning of Islamic extremism in Pakistan. Coming as he did from strict Deobandi (the rigidly uncompromising sharia-based form of Islam propounded by the seminary in Deoband in UP in India) origins (unlike his more liberal predecessors), he set the country on a course of rapid Islamisation: he set up the first Sharia Court, enforced strict blasphemy and personal laws with their concomitant medieval punishments, and encouraged the opening of radical mosques and madrassahs. To be sure, these were initially the feeders of sectarian violence against the non-Sunni communities (Shias, Ahmadiyas and others) before transmogrifying into jihadist nurseries.

These latter would be the instrument of US/Pakistan policy during the Soviet occupation of Afghanistan in the decade 1979-89. From the Cold War perspective the Soviet march in 1979 was alarming to say the least: the US badly needed an ally, and an active one at that. The old relationship was exhumed from cold storage, and in return for the staggering amount of $3.2 billion in aid (matched by Saudi Arabia with a like amount), Pakistan agreed to recruit and train cadres to fight a jihad against the Russians in Afghanistan. The mosques, madrassahs and training camps proliferated in the Pak/Afghan borderlands (with complete US approval), and the Inter-Services Intelligence (ISI) came into its own. While the fomented Afghan insurgency had native Afghan, Pashtun and Pakistani elements, the jihadi nature of the fighting attracted religious zealots from all over, notably from Saudi Arabia and the Sudan – with these latter coalescing into Osama Bin Laden’s Al Qaeda, whose goal was nothing less than the destruction of everything to do with the west and the western way of life. America’s 9/11 nemesis was slowly being forged.

The real problem began after the Soviets left Afghanistan. What was originally meant as a proxy army against the Russians was turned by the Pakistan army and the ISI into an instrument of foreign policy in the furtherance of Pakistan’s objectives in Kashmir. The period of the ’90s saw considerable native insurgency in the Valley, and the now unemployed jihadists were funnelled there with obvious motives. However, what the Pakistani government hadn’t quite bargained for was the second edge of its own weapon: most of these jihadist groups (all of them formidably armed now) turned against the state itself in pursuance of their radical Islamic agendas. Internal violence against rival groups, state organs and foreign targets escalated rapidly, with terrorist spectaculars every other day being the norm. Insurgencies in the frontier areas like South Waziristan and Baluchistan drained the army of nearly two thirds of its strength in bleeding wars of attrition. Further, the Afghan Taliban now had two young cousins, the Pakistani Taliban and the Punjabi Taliban, both actively inimical to the state of Pakistan. The latter’s reluctant but forced alliance with the US in a joint war on terror in the aftermath of 9/11 further sharpened the conflict of interests between the jihadists and their co-religionist state.

John Schmidt’s book follows the terror trajectory of Pakistan in the two decades since the Soviet departure from Afghanistan with astonishing detail. This is a diplomat who has done his homework with commendable diligence, and has obviously not wasted a moment of his three-year tenure in Islamabad. Here you see the bloody strife-torn fabric of Pakistan, the bomb ravages, the massacres, the suicide soloists; the vain beleaguered attempts of the Pakistan army (the civil security forces being useless) to contain the numbing haemorrhage. And yet reluctant to go all out against the perpetrators of radical Islamist violence for fear of worse backlashes – its one spectacular, the Lal Masjid storming in 2007, while succeeding in its immediate objectives, albeit bloodily, failed dismally to deter the sharia screamers: the resulting outbreaks of terrorist mayhem all over the country precluded any repetition of the Lal Masjid experiment.

But the book’s primary interest for the Indian reader lies in the revelation of Pakistani government and army thinking on India and Kashmir. Schmidt’s high level contacts in both the army and the civilian establishment speak with one voice: Kashmir is the only issue between the two countries, all else is incidental. The indigenous Kashmiri rebellion is described by them as an ‘intifada’, and they are far from apologetic or shamefaced about the involvement of Pakistani jihadist/terror groups (like the Lashkar-e-Taiba and the Jaish-e-Mohammed) in the insurgency. Indeed, one of Schmidt’s high level sources justifies the terror camps in Azad Kashmir as an ‘insurance against the failure of the peace process’. At least two senior army sources tell him that Pakistan would not hesitate to use the nuclear option in the event of a war with India – although oddly Schmidt, while repeatedly dwelling on the potential destruction of all of India’s major cities and industrial bases, seems to imply India being at Pakistan’s nuclear mercy, apparently ignoring India’s own nuclear capabilities. Reading the unsaid (if there is any) one is tempted to ask: does Schmidt as a senior US diplomat know something we don’t?

There is also the tricky issue of the continued US engagement in Afghanistan. Schmidt suggests that Pakistan would wish to see that presence on its western border last indefinitely as a reassuring buffer, driven by the fear of India moving up to fill the vacuum should the Americans decide to pack up and leave: a fear perhaps not entirely unfounded, given India’s increasing involvement in Afghan developmental sectors.

By far the most intriguing revelations concern two occasions when India and Pakistan reportedly came very near to a settlement on Kashmir. The first was apparently in the period immediately preceding the Kargil hostilities, and was supposed to be a territorial division along the Chenab river. Nothing came of it because Kargil put paid to it. Even otherwise, it seemed unlikely (and rightly so) to Schmidt that India would have accepted such a settlement, although his Pakistani diplomat friend seemed to think it had been ‘doable’.

The second settlement was reported in a New York Times article by author/journalist Steve Coll in March 2009. According to him the near breakthrough happened during backchannel negotiations in early 2007. The two negotiators were Tariq Aziz, a close friend and adviser to Pervez Musharraf, and Satinder Lambah a senior Indian diplomat. This version of the agreement made no territorial division anywhere but granted substantial autonomy to Kashmir’s Muslims with free access across the border. According to the Pakistani Foreign Minister at the time Khurshid Kasuri, the two sides ‘came so close to finalizing the deal that it had come down to differences in semicolons’, an assertion apparently repeated by a senior Indian official. The deal did not go through on account of Musharraf’s political weakness at the time and his perceived inability to sell it to his people.

Schmidt concludes his chronicle of Pakistan with two chapters titled “The Shape of Things to Come” and “The Final Unravelling”. After two hundred pages of plotting a steadily plummeting graph, it is hardly surprising that these last chapters consider doomsday scenarios. They are, quite simply, frightening, and they are certainly well reasoned based on the evidence so far (and continuing). Any hope of their coming to naught therefore must lie with the secular sanity of politicians, diplomats and thinkers on either side of the two boundaries represented, viz. the Radcliffe Line and the Durand Line. To them, this book must be made required, imperative reading. More so in the current context of the much vaunted Arab Spring, and the rise of the Muslim Brotherhood which would only be too readily hailed as a victory and a vindication by the proponents and practitioners of Islamic extremism already well into their jihads.

Lastly, a word about the book itself. John Schmidt’s prose is sufficiently attractive to make it a surprisingly racy read. And the title is singularly well chosen.