Back from Islamist Extremism to a Democratic Awakening 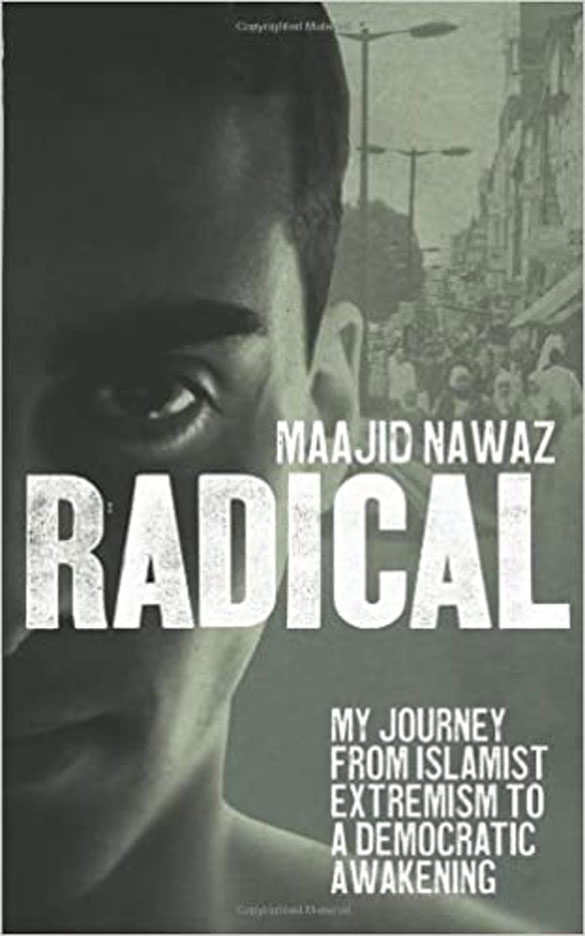 Radical: My Journey from Islamist Extremism to a Democratic Awakening

If you’ve ever wondered what goes into the making of young, educated, middle-class Muslims into “non-violent extremists” and terrorists, read Maajid Nawaz’s Radical: My Journey from an Islamist Extremism to a Democratic Awakening. What a life, what a compelling storyteller. In parts you’ll need to remind yourself that what reads like an engrossing, fast-paced, action-packed thriller, a piece of fiction, is in fact a real-life account.

The year is 1992 and here’s a real-life scene from a street in Southend in Essex, UK, as recounted by Maajid, then all of 15 years old: “Oh shit, I’m surrounded. There’s five, six of them, around me on all sides. Knives, knuckledusters, clubs. There’s the Hitler salute again, pierced by more swearing: ‘F**king Paki’! ‘F**k off back to where you came from'! I can feel my fear rising up, my adrenaline pumping... They know there’s no escape for me now, and so do I.”

Blacks and browns are a tiny minority at the time in Southend and racism is rampant: on the streets, in the neighbourhood, in the school; worse, the police too are racist and partisan. The earlier generation of immigrants had learnt to “adjust” to their reality but the born-in-Britain generation will not have its dignity trampled upon. Since there is no one to defend them from the skinheads, the young among the blacks and browns, Maajid included, learn to wield the knife for self-defence: “Violence breeds violence.” But the dice remains heavily loaded and the result is alienation and mounting rage.

Then, in the midst of a potentially ugly face-off one day, to Maajid’s amazement, his elder brother Kash walks up to the ringleader of the skinheads, utters a few magic words and the thugs simply slink away. What did Kash say? “I told them we’re Muslims and we don’t fear death. We’re suicide bombers. We’ve been told how to make bombs and I’ve got one in my rucksack. If we have to take ourselves out to take you out, then that’s what we will do.” For Southend’s Muslims who until now were being hounded, there’s respect. And a solid sense of empowerment.

Through a religion-based ideology — Islamism — and an organisation — Hizb al-Tahrir (HT) — Kash and Maajid soon learn that Muslims and Islam were under attack across the globe — Southend, Gaza, Bosnia, Iraq, India. As part of their campaign to “globalise Muslim grievance”, the HT puts out a leaflet, “Hideous Hindus Massacre Muslims”, in the wake of the 1992 demolition of the Babri Mosque and the communal carnage that followed. “That one leaflet… changed the course of my life,” recalls Maajid in his book. From Ayodhya to Southend: Is the Sangh Parivar and our intelligence agencies listening?

The HT also teaches its followers that there’s no room for rage or despair, a solution is at hand: the re-establishment of a global Islamic caliphate with its Shariah laws. Having enthusiastically joined the HT, an organisation with branches in many countries, Maajid proves to be an excellent campaigner rising rapidly in the hierarchy. Among his most important missions is the attempted infiltration of the Pakistani army. The objective: capturing power in the country and with the aid of the “Islamic bomb” laying the foundation for a “nuclear Caliphate”.

Fast forward to 2002. By then a recognised HT leader, Maajid lands in Egypt as a student, with expansion of the organisation's network as the hidden agenda. Before long, he is nabbed by Hosni Mubarak’s notorious Amn al-Dawlah and dumped in an interrogation centre. While all around him are subjected to gruesome torture, he narrowly escapes the same fate, thanks to his British passport. But convicted for belonging to an organisation banned in Egypt, he spends several years in jail.

It is during his years in prison that Maajid finds himself doing serious rethink, which ultimately leads to his sharp U-turn, his journey “from Islamist extremism to a democratic awakening”. “Ever since I had been a child I found unfairness, injustice and oppression intolerable,” writes Maajid. It is because of this that the young Maajid had wielded the knife in Southend, joined the HT and emerged as one of its ablest leaders working hard to spread the organisation’s tentacles from the UK to Denmark, from Pakistan to Egypt.

It is the same sense of justice and fair play that now prompts him to ask a different set of questions. Why did a communist lawyer from Egypt fight his case? What about those liberal Egyptian Muslim leaders, his fellow prisoners, who were as opposed to Mubarak’s dictatorship as Islamists like him? Why had liberals and leftists, godless individuals and organisations in the UK risen to his defence? Years of soul search finally help him to see the difference between a religion called Islam and the totalitarian Islamist ideology.

Maajid is not the only one to return from the brink. Another good example is Ed Husain, author of The Islamist: Why I Joined Radical Islam in Britain, What I Saw Inside, and Why I Left, Maajid’s one-time mentor in the HT who cut his tie with the totalitarian worldview before he did. However, while Husain inclined towards traditional Sufi Islam, Maajid has embarked on a radical modern enterprise: the widespread infusion of a “democratic culture” among the youth in Muslim societies to lay the basis for a vibrant democratic politics.

If the architect of War on Terror, George W. Bush, felt the need to specially invite Maajid to Texas, and British Prime Minister David Cameron is as keen on his views, perhaps we too should get to know the man.