Peace for the Sake of Peace

Name of the Book   : The Age of Peace 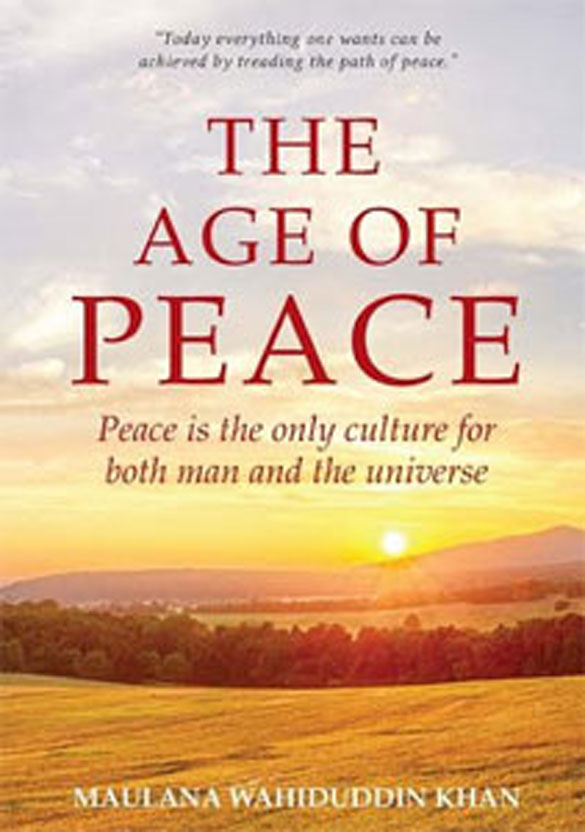 The purpose of this book is to re-engineer the minds of those who think in terms of violence. The book aims at making such people realize that it is entirely possible for them to successfully achieve by peaceful means what they are unable to achieve by violent means. May God accept the spirit of the writer in this regard and make this book a means of ushering in a new revolution which takes human history from violence to peace.

Excerpt from MaulanaWahiduddin Khan’s Foreword to The Age of Peace

MaulanaWahiduddin Khan’s latest book, The Age of Peace, is a book to counter terrorism, war, and violence rooted in negative thinking towards ushering in “a new revolution which takes human history from violence to peace”. The book aims to make those who are engaged in violence realize that the present age is the age of peace and expounds on the guiding principles on how to use peaceful methods to achieve their goals, specifically the unfinished agenda of the universal dissemination of Quranic teachings. The book is divided into seven chapters, namely: 1) Peace for the Sake of Peace; 2) The Advent of the Age of Peace; 3) The Non-Confrontational Methods for Peace; 4) The Experience of History; 5) The Need for a Counter-Ideology; 6) Peace in the Muslim World; and 7) Islam and Peace.

Chapter 1 which is entitled “Peace for the Sake of Peace” talks of peace as the true Summum Bonum, the supreme good, because peace is like “social soil” that can be cultivated to receive the fruits of social justice. Peace establishes normalcy which makes all opportunities available. Availing of these opportunities through wise planning is the way to achieve justice. It is of utmost importance to embrace the ideology of pacifism which is subscribed to by all those who find war and all its attendant evils abhorrent – violence, destruction, loss of life and, in particular, the disruption of normal human existence. Removing people’s sense of injustice is the way to end violence; justice is achieved not by fighting or protest-based activism but by first establishing peace. It is necessary to abandon all kinds of confrontational methods because when a person adopts the peaceful method, the entire world of nature comes to his support. A person who adopts the violent method, on the other hand, makes the entire world of nature to stand out in opposition to him.

In chapter 2, The Advent of the Age of Peace, MaulanaWahiduddin Khan points out that God’s divine management of history brought the de-monopolization of power and resources in the modern age with the enjoyment of democracy, modern industrialization, intellectual freedom, and modern science. This de-monopolization of resources has made the violent method totally irrelevant. Opting for war does not arise out of any kind of necessity but is only the result of the ignorant misuse of freedom, which shall be rewarded, as the Quran says, with “disgrace in this world and severe punishment on the Day of Resurrection” (2:85).

Muslims would do well to abandon political activism and devote themselves to non-political fields such as education, the media, economics, and Dawah work, or conveying God’s message to the people. The civilized way of managing differences is through the application of reason and peaceful dialogue, not through confrontation and fighting, which is a barbaric way. When people learn how to settle differences peacefully, human civilization will have reached its full flowering, something which has not been achieved yet at present. With the common ancestry of human beings established by scientific evidence, waging war is the act of a pre-civilized age and not of modern civilization.

Chapter 3, The Non-Confrontational Methods for Peace, speaks of peace as one of the principles according to which the world has been designed. The way of peace follows the way of nature. Anyone who goes against the law of nature, like the terrorist culture, will never have success in his endeavours. The numerous stars and planets in the vast space follow their paths without interfering with the path of or clashing with each other. The policy of mutual non-interference is the only formula for peace and harmony, for it gives every man or woman the scope to live on his or her own without inflicting harm to other fellow human beings. Striving to reach one’s goal through quiet planning and discovering all available opportunities is the wise course to achieve success. The only practicable method in this world is that which is based on positive planning, which means ignoring the problem and availing of the opportunities present.

The power of peace is greater than the power of violence as attested to by the example of Mahatma Gandhi, whose peaceful strategy worked to bring about India’s freedom from British colonial rule in contrast with violent methods of countering the colonizers. Modern civilization has developed a new modus operandi to avert clashes, namely, that of peaceful dialogue, which serves as an institutionalized buffer like the mediation role of the United Nations between antagonistic nations.

In Chapter 4, The Experience of History, MaulanaWahiduddin Khan stresses that the only way to establish peace in this world is to be content with pragmatic goals when the ideal goal is not achievable, and not to resort to violence for self-styled goals. Success in this world can be attained only through peaceful planning, which means making plans on the basis of available resources. In examining history, violent activism did not give anything to the world, as what the two world wars showed, while peaceful activism ushered in a civilisational phase which was more highly developed than ever seen before.

At present, the only option available is that of peaceful struggle, for with the invention of weapons of mass destruction, war has not remained an option for anyone. The failure to manage crises is the root cause of all cases of war. Learning the art of crisis management leads to peace. The time has come again for Muslims to abandon all kinds of violence and achieve their goals through peaceful methods. Nothing constructive can be achieved through war and violence whereas peace, based on education and positive planning, invariably proves to be successful.

Chapter 5, The Need for a Counter-Ideology, speaks of tackling Muslim militancy at present with a counter-ideology by delegitimizing wrong interpretation of religious scriptures with the right interpretation. A powerful book is needed to encourage people to shun terrorism and follow the path of peace. One of the aims of the book is to offer valid arguments to show that the concept of political Islam has no basis in Islam. To save young Muslims from the negative culture of anger, disillusionment, and negative thinking, they need to be educated to be able to differentiate between truth and falsehood. Young Muslims should be encouraged to take part in the global distribution of the Qur’an, a mission which is a billion times more attractive than terrorism. By utilizing the advances of modern technology, Muslims can achieve all their goals peacefully. Building a peaceful society requires the re-engineering of the minds, a task that can be fulfilled through informal, more than formal education, i.e., through the media, literature, seminars and conferences, dialogues, discussions, and so on.

Chapter 6, Peace in the Muslim World, stresses the point that peace promotes all kinds of progress while violence endangers all kinds of constructive activities since no constructive target can be achieved by fighting. The greatest unfinished agenda which all Muslim groups should work for is the universal dissemination of Quranic teachings. Giving the correct picture of Islam as peaceful religion is the greatest need of today; thus, Muslims should adopt the peaceful method, the low-profile method which follows the law of nature. The basic reason why Muslims have engaged in a culture of violence is their educational backwardness. The best type of activists are the pro-self activists, those who make plans according to the creation plan of God; while the anti-self activists who are the terrorists and violent activists are the worst type for they destroy themselves. Education, both formal and non-formal, can de-condition the minds of terrorists who have been wrongly conditioned in their thinking for it is better to have recourse to education than to guns and bombs to counter terrorism.

Chapter 7, the last chapter which is entitled “Islam and Peace”, makes a clarion call to Muslims to sincerely repent and totally abandon violence – including violence among themselves – the worst kind of evil in history. The concept of “justified war” is based on a wrong interpretation of the Islamic scripture – both the Quran and the Hadith. Those who are desirous of entering the Eternal Paradise shall have to adopt the culture of peace. The process of character building can fructify only in an atmosphere of peace, not of violence and fighting. The law of repelling is at work against the terrorists who have not achieved any positive results. The age of post-terrorism will dawn; a silent process is at work behind the scenes which will take history from violence to peace.

Muslims all over the world must establish a large institution with the name Universal Peace Centre, whose sole purpose is to promote peace and replace the culture of violence with the culture of peace. The Centre will be a means of fulfilling the global responsibility of Muslims which is to spread the word of God to every man and woman on earth, and to change the image of Islam from a religion of violence to a religion of peace.

Summing up, The Age of Peace is meant to alter the negative thinking of those who are engaged in violence and terrorism and make them realize the need to abandon violence at all costs and embrace the culture of peace. The end-goal is to usher in the post-terrorism age and take human history from violence to an era of peace, for such follows the law of nature and only those who espouse the culture of peace can enter the Eternal Paradise.

The book can be downloaded free of cost from:

To procure a hard copy of the book, please write to info@cpsglobal.org

Dr. Belinda F. Espiritu is a faculty member of the University of the Philippines Cebu. She teaches Communication Theory and Research, Development Communication, and Speech Communication. Her research and writing interests are on religion and spirituality, peace and development, new media studies, and media audience reception studies. She is a peace and sustainable development advocate.