Rethinking Muslim Women and the Veil 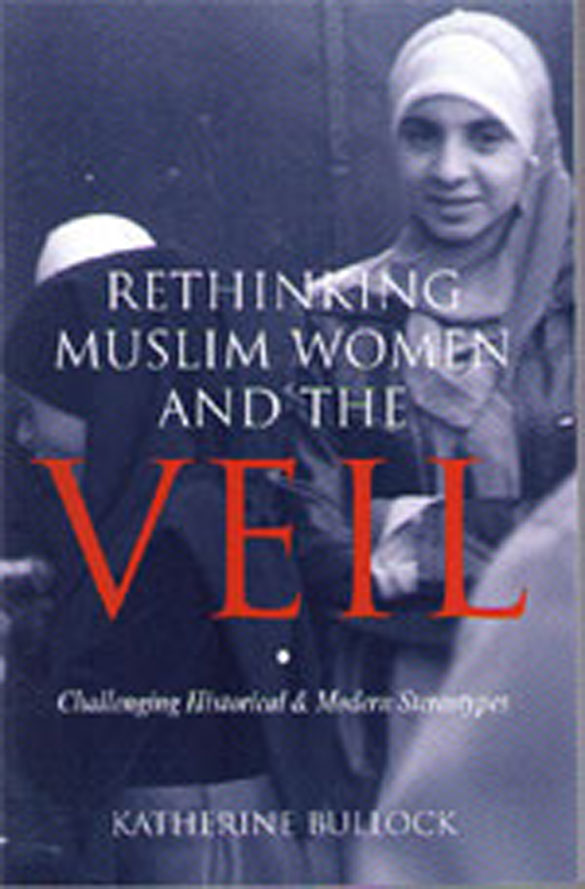 Rethinking Muslim Women and the Veil by Katharine Bullock, a convert Muslim who lives in the West, is probably one of the first meticulous books that is a detailed analysis of the Hijab. Differently from most others, she asserts in the entire book that there is compatibility between veiling and modernity.

Bullock reveals affirmative aspects of the veil which are easily perceived so far:

Many books have been written about the veil by outsiders or Muslims who do not wear it. Generally, this approach defines that Muslim women make standardized choices about veiling that makes them submissive to authoritative and patriarchal culture of the religion. Yet, in postulating a positive theory of the veil, Bullock presents an alternative perspective, based on the view and experiences of Muslim women themselves in Rethinking Muslim Women and the Veil. She questions both the common view of Muslim women being subjugated by men, as well as, the liberal feminists' who criticize the choice of women to cover themselves as oppressing.

However, Bullock's profound analysis and discussion of the foundation of the negative Western approach towards Hijâb in the colonial era, with consideration of many of the feminist theories and how they relate to Hijâb, make this book unique.

In her research she analyzes different historical terms such as the colonialist era of the nineteenth century in different parts of the Muslim world such as Turkey, Algeria and Egypt. She also refers some previous writings by Europeans of the times about these countries and analyzed the views they had about the veil and about Muslim women. She argues that attacking veil was an essential part of the colonialism. It was necessary to break down barriers between colonial power and hidden women.

Bullock interviews Toronto Muslim women with different religious and cultural backgrounds. She reports diverse thoughts and reasons about the veil and its interpretation. She also narrates some interviewees' experience of the discrimination and misinterpretations. This way her personal touch gives credibility to many of the concepts she discusses. In that chapter and chapter three, Bullock uses women's experience as a foundation of knowledge. She examines re-veiling movement in the Muslim world. According to Bullock's survey, women cover for religious, psychological, political, revolutionary, economic, cultural, demographic, practical, and domestic reasons. Yet, I thought most of them were unfamiliar and do not apply to me or I respectfully disagree with some of the interviewees. However, I assume here Bullock tries to show how diverse the Muslim women in Islam, tradition, culture, and spirituality and how wrong to generalize them as 'Muslim women' who are submissive to a patriarchal culture. Here she challenges Orientals' 'save' Muslim women who are 'victim' of authoritative men and the tradition thesis by mentioning all verity of different opinions.

On the other hand, Bullock offers western feminists populist views on Muslim women and clothing practices, too. The most impressive aspect of the book is the way Bullock responds to Mernissi and others' arguments. Instead of bypassing them, Bullock analyzes and examines most of them by using feminist methods and offers a positive alternative theory to the Hijâb. Thus one of the most rewarding sections of the book is chapter four because the whole chapter is about exclusively arguing and refuting the works of Fatima Mernissi's thesis about the veil in Beyond the Veil and The Veil and the Male Elite. Bullock explains that Fatima Mernissi, a well-known Moroccan feminist author looked at the veil as a tool to control women's intellect through their bodies as well as she believes "Islam views women as a threat to the social order. Also, Islam considers femaleness as anti-divine. Owing these notions about women being a threat and anti-divine, they are a distraction to men and male piety and communication with God." Yet, in a theoretical ground in this chapter Bullock declares that Mernisni's analysis of the veil is based on her negative personal experience with veiling and suggests there is a possible alternative reading in Islam. Basically, this chapter is an eye opener for many Westernized women who grow up with similar ideas to Mernisni's. So I believe anyone who has read Mernissi should read Bullock to make the right decision about the veil.

In Rethinking Muslim Women and the Veil, Bullock offers a new understanding to 'veil is oppressive' debate by breaking down barriers of misconception on 'modernity equals unveil' idea; she presents the veil as a symbol of liberation with a feministic point of view. Bullock suggests that women have liberty in terms of having a form of control over their bodies and freedom from conforming to images of perfection with Hijâb. She also points out that, the Hijâb is not only a headscarf to cover the hair but a cover for the whole female figure, attitude, and style.

In chapter five, Bullock discusses that veil is an "empowering tool of resistance" to fight against materialism and capitalist culture. Bullock offers the Hijâb as a cure, a release from the oppression of the twenty first century's beauty game and the slim "ideal" woman. According to view of Bullock, the veil is as an endeavour of Muslim women to express their disapproval of how women's bodies are used in advertisements, movies and the public sphere, beauty myth on women's physiological and physical health. She explains wisely how Hijâb is useful against the hyper-sexualisation of the female body with the consumerism of these days.

As a respectable voice of believing Muslim women, Bullock confirms in Rethinking Muslim Women and the Veil that liberation and the equality of women are fundamental to Islam itself and veil is nowhere close to a symbol of Muslim women's oppression as it is understood in the popular western concept. She shows that from cultural to deeply spiritual reasons, variety of Muslim women may have different reasons to explain the necessity of the veil in Islam. Yet debate will not be easily closed. Profoundly she explains that as a religiously endorsed dress, it connects "the wearers a gateway into faith traditions that elevates self-esteem by reminding people their worth is not based on appearances, but on their pious deeds." From this exact point of view we can easily say that Hijab proves that Islam treats women as a person rather than as a sexual object.

Bullock also shows us a systematic and honest analysis beyond the 'veil' with great sophistication. She draws a thin line between so called religious duty and faithful action for the sake of God as well as sincere, pious Muslims and the flawed followers of faith.

This eye opener book is definitely a must read for all Muslim women to acknowledge the true meaning of veil and the main reasons to wear the veil in the Islamic world.