Audrey Truschke’s New Book, The Language of History: Sanskrit Narratives of Muslim Pasts, Debunks the Idea That Hindus and Muslims Have Been Enemies in the Subcontinent

Especially in India, Audrey Truschke is better known for her tweets than for her scholarship. Often the centre of controversy or of a Hindutva-led hate storm which includes threats of physical violence, Truschke’s solid work as a historian of pre-modern India is mostly overshadowed by the more pressing concerns of the immediate present. Her heresy against the credo of Hindutva lies in the inauspicious constellation of ethnicity (non-Indian), gender (female), and academic training in the West (the tools, including languages, to analyse text and context). Her books (particularly her last one on Aurangzeb) are noticed and reviewed, but typically by detractors who have opinion and ideology as their critical weapons rather than equivalence in research or appropriate tools of historical analysis. 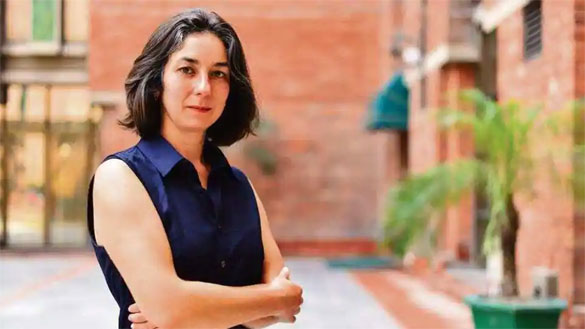 Audrey Truschke insists that we cannot read either the attitudes or the identity politics of the present into the past. (Mint)

Truschke’s new book, The Language of History: Sanskrit Narratives of Muslim Pasts, seems to steer clear of any contentious claims and should have smooth passage in this country. But then, the imagination of offence has no limits and it is entirely possible that someone will find her presentation of the texts created by Hindus that do not despise and vilify Muslim rulers as either deliberately provocative or entirely fabricated. Until that cacophony rises in its unholy chorus, let us enjoy the pleasures of the book as we find them.

In the main, Truschke’s thesis, here and elsewhere, is relatively simple: She argues against the Hindutva-driven polemic that Hindus and Muslims in South Asia have always hated each other and that Hindus have always felt oppressed by their Muslim rulers. She has made this point at length in her first book, eloquently titled Culture Of Encounters, where she examines Sanskrit texts at the Mughal court. In The Language Of History, she extends her previous argument by looking at Sanskrit texts and their descriptions of Muslim rule from within and without, written primarily between the 12th and 18th centuries and created by a Hindu caste (and, arguably, a class) elite.

Truschke parses these texts in a manner such that they need not be read as unidimensional, as documents from the contemporaneous moment that spew hatred for Muslim “enemies”. She argues on several levels that Sanskrit texts written over that period of 600 years do not indicate that the Turkic and Persianate peoples who settled in India were despised for their religion. For example, she says that Muslim aggressors were described in Sanskrit texts in keeping with literary conventions, as any opposing military force would be. Further, that the nomenclatures for these raiders and invaders were generic Sanskrit words for outsider (such as yavana and mleccha) or were regional markers borrowed from other languages (for example, turushka from Persian and tajika from Arabic) or hammira, a Sanskrit neologism for the Arabic amir. This was especially true before Islam became a continuous political presence in the subcontinent and after it became so, there are instances of Hindu kings in the regions of Rajputana and central India who took on hammira as an honorific for themselves, adding it to their list of other more commonplace Sanskrit titles such as maharaja.

While it is often a historian’s job to show us how the past inflects the present, the opposite proposition is not always and equally the case—the colours and hues of the present need not be the same as those of the past. Truschke rightly reminds us (as do other historians like Romila Thapar) that the ur-event for contemporary Hindutva (Mahmud Ghaznavi’s avaricious raid on the Somnath temple in the 11th century), is noticeably unremarked upon in its own time. Truschke insists that we cannot read either the attitudes or the identity politics of the present into the past, that many hundreds of years ago, people acted and reacted differently, that their feelings towards each other were not polarised in the way that they are now. She substantiates these hypotheses, in this case, by reading Sanskrit texts that refer (sometimes extensively) to the Muslim presence in their midst in the context of their own literary histories and genre traditions. Truschke quotes texts from different time periods and different parts of the country, such as Jayanayaka’s Prithvirajavijaya (12th century), Gangadevi’s Madhuravijaya, (14th century) and the 15th century Jaina chronicles of Jonaraja/Shrivara called the Rajatarangini. This larger literary space, which is also a historiographical one, simultaneously provides a more specific location for the texts and allows for a more nuanced and complex reading of the material that Truschke handles.

Here is the crux of The Language of History’s argument. “As Indo-Muslim kings entrenched themselves in the subcontinent and expanded their control through warfare, Sanskrit authors produced large-scale poems that featured violent encounters with these polities and thereby integrated their rulers into the intertwined realms, as articulated in Sanskrit literature, of kingship and poetry. An earlier generation of scholars misread, rather gravely, the significance of this literary development. Sanskrit poetic portrayals of violence involving Muslims did not mark Muslims as abnormally bloodthirsty, nor did they constitute some kind of mass literary resistance. Rather in a world where warring was an integral part of kingship and literature, Sanskrit authors signalled a willingness to investigate the literary possibilities of Muslim-led rule by pitching Muslims as worthy foes and in some cases, heroes on the battlefield. In other words, writing about the violence enacted by Indo-Muslim political leaders likened them to, rather than distinguished them from, other Indian rulers.”

It’s easy to see how a contention like this one might become cannon fodder in a pitched battle about how to read Hindu texts about Muslims in the subcontinent—Truschke staunchly insisting that the texts prove that the so-called outsiders were being integrated into the literary imagination and therefore were no longer “foreign”, with the other side remaining adamant that text is greater than context, that literature must be read only as historical truth, that time (and some rivers) can flow backwards.

Truschke puts herself in the trenches, as it were, not afraid of the battles that she has chosen to fight. She writes confidently, not afraid to use “I” in the construction of her arguments. But more than that, she openly, and with some measure of aggression, confronts the schools of thought she is arguing against, be they in her own field of history and historiography, or in the politicised morass that Hindutva activists and ideologues have generated around any discussion of India’s past. She wants her opponents to see her, to recognise the person that she is and to acknowledge that, with the skills of her trade, she is able to reasonably challenge everything they hold to be true. As the clear stream of reason has been brutishly diverted into the sands of virulent hatred, it may seem that the war that Truschke and so many others have chosen to fight is unwinnable. But the battle in this war must still be fought, for, all over the world, the stakes for what we stand to lose get higher every day.

Arshia Sattar is a writer, scholar and translator based in Bengaluru. Her latest books include Mahabharata for Children and Maryada: Searching for Dharma in the Ramayana.

Original Headline: What ancient Hindu texts tell us about Muslims