Ahmet T. Kuru Traces the Stagnation of The Muslim World to The Primacy of The Ulema-State Alliance 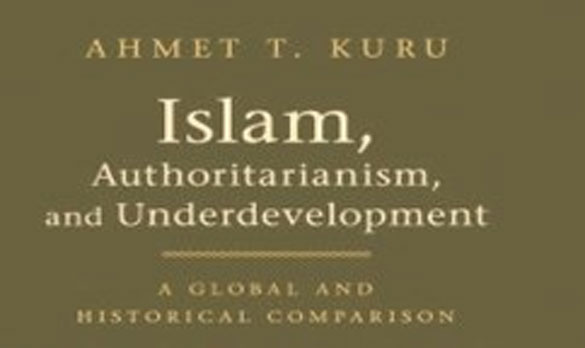 Islam, Authoritarianism and Underdevelopment: A Global and Historical Comparison

Since 9/11, issues of violence, authoritarianism and underdevelopment in the Muslim world have attracted much attention in the media as well as academia. Two-thirds of all wars and about one-third of all minor military conflicts in 2009 occurred in Muslim-majority countries. According to the United States-based think-tank Freedom House, in 2013, less than one-fifth of 49 Muslim countries were democracies, whereas three-fifths of the world’s 195 countries were classified as democracies. Muslim-majority countries have woefully underperformed in economic and human development indicators such as gross national income per capita, literacy rate, years of schooling and life expectancy.

Generally speaking, three theories have tried to explain the linkage between violence, authoritarianism and underdevelopment in the Muslim world. The first, known as the essentialist approach, blames certain ‘essential’ characteristics of Islamic texts or history as causes of the problem. Various versions of this theory are used by critics of Islam, both in the West and Muslim countries. The second — post-colonial or anti-colonial approach — singles out Western colonisation of Muslim countries and on-going Western exploitation of their resources as the root cause. This approach is more international in its analysis and is very popular among many Islamists and secularist ideological groups who share this anti-Western perspective. The third approach — institutionalism — holds the lack of effective institutions in Muslim countries responsible for their underdevelopment.

In his well-researched and thought-provoking book Islam, Authoritarianism and Underdevelopment: A Global and Historical Comparison, Turkey-born Ahmet T. Kuru, a political scientist at the University of San Diego, differs with all three approaches and offers an alternative explanation.

Kuru challenges the essentialist thesis by detailing the remarkable philosophical and economic achievements of Muslim societies between the eighth and 12th centuries, thus proving Islam’s compatibility with progress. He disagrees with the anti-colonialists by documenting the decline and political and socio-economic crises that Muslim societies were already facing around the mid-18th century, at the onset of Western colonisation. About institutionalism, he posits that institutions are created by human beings, so it requires examining as to which groups or classes established strong institutions in early Islamic history and which failed to deliver in later history.

Kurut examines the relations between the religious, political, intellectual and economic classes. He argues that success or failure in intellectual and socio-economic spheres, both in the Muslim world and Europe, is determined by these class relations. The book’s main thesis is that early Muslims’ achievements can be attributed to leadership displayed by the intellectual and bourgeoisie mercantile classes. However, by the 11th century, class relations in the Muslim world changed, leading to its stagnation and finally decline: the ulema-state alliance emerged as the powerful player and marginalised the intellectuals and the bourgeoisie.

Muslim thinkers and merchants were at the forefront during early Islam, while Europe, at the same time, languished under religious orthodoxy and military rule. In the 11th century, a fateful alliance between military states and orthodox Islamic religious scholars (ulema) emerged, altering subsequent history. This alliance, which persists to this day, marginalised the intellectuals and bourgeoisie, thus stifling competition and creativity.

Kuru argues that the state-ulema alliance is neither an essential part of Quran and Hadith, nor a permanent feature of early Islamic history. Examples of state-religion separation can be seen in early Islamic history, and the author explains that the idea of inter-twining religion and politics is a pre-Islamic Persian/Sassanid doctrine wrongly attributed to Islam.

Between the eighth and 12th centuries, creative Muslim polymaths dazzled the world with their achievements and contributions in diverse fields such as medicine, mathematics, astronomy, philosophy, cartography, agriculture etc. Muslim merchants are credited with inventing several banking tools, such as cheques and bills of exchange.

In early Islamic history, scholars maintained their distance from political authority (considering proximity to power centres as corrupting) and preferred to be financed by commerce, thus establishing close relations with merchants. Religious and other scholars were often themselves merchants or funded by merchants. According to a research study focusing on the period between the eighth and mid-11th centuries, only nine percent of 4,000 Islamic scholars were funded by the state; the remaining 91 percent were financed by commerce and the middle class.

Scholars and thinkers enjoyed freedom of thought because of their aloofness from political authority; they were disillusioned and dismayed by the rulers. The Umayyads suffered from a lack of religious legitimacy because of their persecution of Prophet Muhammad’s descendants and the use of violence to consolidate power. This distancing from state authorities continued during the earlier period of the Abbasids, who had replaced the Umayyads.

Independent religious scholars — imams Abu Hanifa, Malik, Hanbal and Shafii — established four schools of Sunni jurisprudence during this period and refused to become servants of the state. They were all imprisoned and persecuted by state authorities for their dissenting opinions. Shia imams faced even more severe persecution, including incarceration and, according to Shia traditions, were also poisoned.

A major transformation in the Sunni Muslim world took place in the 11th century, with the formation of the Din Wa Dawla [religion and state] alliance between the ulema and the military state. This resulted in Islamic scholars transforming into state-servants through state-led madrasas, the militarisation of the economy through the Iqta system of land tenure and tax farming, and the marginalisation of philosophers and merchants.

The transformation occurred under the Abbasid caliph because of the rising threat of rival Shia dynasties — Fatimids in Egypt, Buyids in Baghdad — and the Mutazilites in Iraq. Nizamul Mulk, the Persian prime minister of the Seljuk empire, was strategic in establishing Nizamiya madrasas which cemented the ulema-state alliance across the Muslim world. Scholars such as Imam Ghazali, who denounced Shias and the Mutazilites, consolidated Sunni orthodoxy. The merchant class was undermined and the military class became economically dominant as land revenues were distributed to them and other officials through iqta.

Invasions by Europe’s Crusaders and Asia’s Mongols strengthened the state-ulema alliance as Muslim societies sought refuge in the leadership of military heroes and the religious elite, further ignoring thinkers and merchants. Eventually, the Seljuk model of ulema-state alliance was adapted and adopted by the Ayyubids/Mamluks, Ottomans, Safavids and Mughals.

Kuru maintains that, although the Ottoman, Safavid and Mughal empires exhibited economic growth till the 16th century, the madrasa system and the ulema-state alliance throttled creativity and marginalised independent scholars and merchants. The weakest sections of the book deal with Iran and India; in Iran it fails to explain the role of the merchant-Shia ulema — instead of ulema-state — alliance, in powerfully opposing the state, which resulted in the 1906 and 1979 revolutions. In Iran, before the 1979 revolution, Shia ulema were financed by citizens’ private money (khums). In Mughal India, apart from conservative Aurangzeb’s period, an adversarial relationship existed between Muslim ulema and the Mughal kings, especially Akbar and Jahangir.

The problem of violence cannot be divorced from the issue of historical authoritarianism in Muslim societies. Most Muslim countries in the last century, whether ruled by secular or Islamist leaders, have continued to be authoritarian, pursuing oppressive policies that have led to war, civil conflict and terrorism. Most secular leaders were of military background, thus ignoring intellectuals and merchants.

Authoritarian rulers have relied on alliances with the ulema and oil rents to sustain their rule; 22 out of 28 rentier states in the current world are Muslim, deriving more than 40 percent of their revenues from oil. Instead of the traditional land rents, the ulema-state alliance today is reinforced by rentierism fuelled by oil revenues in countries such as Saudi Arabia, Iran and Algeria etc. Oil rents have contributed to the dominance of the ulema-state alliance and the marginalisation of the bourgeoisie.

The West’s dramatic rise can be attributed to three ground-breaking scientific inventions: gunpowder, the nautical compass and the printing press. Of these, Muslim military empires only embraced the gunpowder. In the final analysis, the printing press — ignored by the Muslim world for 280 years — turned out to be the most critical invention of the last millennium. Muslim military leaders, under the ulema’s influence, saw the printing press as risky technology and a potential threat. For three centuries there was no printing press in the Muslim countries and the results were disastrous. Around the 1800s, the average literacy rate in Western Europe was 31 percent; in the Ottoman empire it was only one percent, explaining the path-dependent literacy gap between the Western and Islamic civilisation.

In conclusion, the book emphasises that the Muslim countries’ serious socio-economic problems cannot be attributed to Islamic beliefs, Western colonisation or lack of institutions; the stagnation results from the ulema-state alliance enjoying monopoly over ideology and power and oil rents-based rentierism. The key policy recommendation of this worth-reading book is that the Muslim world acutely needs independent intellectual and bourgeoisie classes to recreate its erstwhile intellectual dynamism and economic creativity through innovation and competition.

Ammar Ali Qureshi is an independent researcher and consultant based in Islamabad.

Original Headline: THE DECLINE OF MUSLIMS