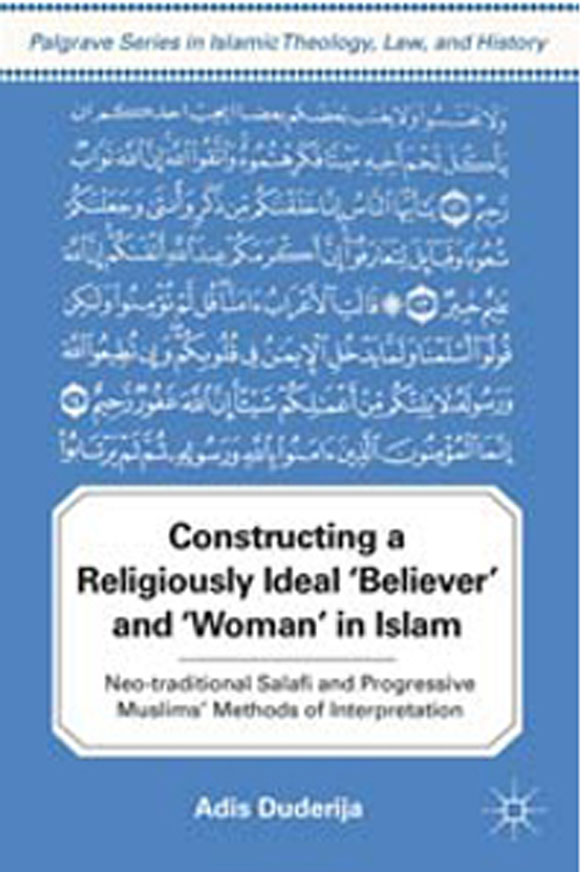 The concern of my book Constructing Religiously Ideal ‘Believer’ and ‘Muslim Woman’ Concepts: Neo-Traditional Salafi and Progressive Muslim Methods of Interpretation (Manahij) is to explore how on the basis of different manahij, and the assumptions that inform them, the two contemporary Islamic communities of interpretation, NTS and progressive Muslims, conceptualise their respective versions of a religiously ideal ‘Believer’ and ‘Muslim Woman’ concepts. The comparison of the NTS and progressive Muslims  manahij are based on the  interpretational assumptions pertaining to  :

·        the function and  nature  of language in the qur’anic text and the nature of Revelation;

·         the extent of the recognition (or otherwise) of the role of context in the shaping of the Qur’anic content;

·         the role, legitimacy and scope of reason in Qur’anic interpretation and the nature of  ethical value in the Qur’an;

·         the extent of the employment of a thematic, corroborative-inductive (or systematic) approach  to Qur’an’s  interpretation or  lack thereof  of  ( i.e. prevalence of what  I  term textual segmentalism);

·         the scope of a purposeful, aim-based approach ( qasd) to Qur’anic interpretation, and

·        the nature and the scope of the concept of Sunnah and its interpretational implications.

As such the book highlights the crucial importance of the act of interpretation and its underlying methodological, epistemological and hermeneutical assumptions in the formulation of the NTS and progressive Muslims construction of  religiously ideal ‘Believer’ and ‘Women’ concepts in Islam. The broader context of the book is informed by the contemporary intra-Muslim debates on the issues of religious authenticity, legitimacy and the authority to speak for, and thus, define the very nature and future of Islam. In this context I point out that due to the forces of globalisation and modernisation which favour democratisation of religious knowledge and facilitate the fragmentation of religious authority, these debates have intensified with a number of actors who have emerged asserting their authority to authoritatively speak on behalf of Muslims and Islam. I also argue that this state of affairs has left us with a perplexing phenomenon of ‘normative Islams’ which at times can be mutually exclusive on certain issues. The concepts of a ‘Believer’ and ‘Muslim Woman’ are such two issues.

In order to situate the intense and highly contested contemporary debates and discourses on the issue of the nature of the Islamic tradition and to show their essential continuity/discontinuity  with the experiences of the previous communities of interpretation, the first chapter of the book outlines the broad contours of the historical background behind the debates surrounding the status and the authenticity of the various sources of its legal authority with a particular emphasis on the madhhab and ahl-hadith based manahij. In particular I examine the various approaches to the question of the nature and the authenticity of Prophetic authority (Sunnah) and its relationship with the hadith and Qur’an bodies of knowledge.

In the second chapter I situate the NTS community of interpretation in relation to this historical context and argued that the NTS scholars (such as Bin Baz, Al Uthaymin, Al Albani, Al Madhkhali and their western sympathizers such as Amina Abu Bilal Philips)  can be considered as the contemporary incarnation of the pre-modern ahl-hadith school of thought in relation to how they conceptualise the concepts of ‘ilm, Salafism, Sunna and its the relative status in relation to the Qur’an and hadith bodies of knowledge as well as in relation to non-textual sources of knowledge such as ra’y and taqlid. Furthermore, the NTS community of interpretation  is found to advocate a completely textual legal hermeneutic expressed best in their definition of ittibaa’ as an unflinching adherence to sahih hadith which in turn is conflated with following the true salafi Qur’an –Sunna manhaj . Secondly, I attempt to show that the NTS manhaj as identified and characterised by themselves is often unspecific and vague, consisting of  amalgamations of qur’anic verse and sahih hadith and at times buttressed  with a commentary of classical scholars who themselves espouse the ahl-hadith manhaj. Moreover, I seek to show that the NTS manhaj shows no evidence of being consciously grounded in any theory of interpretation. Thirdly, I maintain that the NTS manhaj is often disclosed by means of oppositional dialectics where it is contrasted in general terms with ‘new methodologies of modernist and intellectuals’ or that of the madhahib or Sufis. Lastly, I note that one important part of the NTS manhaj is their subscription to the concept of al wala’ wa l bara’ which they consider as is part of the ‘aqidah.

The third chapter discusses the delineating features of the NTS manhaj. They  include the following: a philologically-centred interpretational orientation; textual ‘intentionalism’ i.e.  the subscription to a voluntaristic view of law, ethics, morality and ontology; the belief in the fixed, stable nature of the meaning of the qur’anic text residing in totality in the mind of its Originator; decontextualization and the marginalization of Qur’anic revelationary background for the purposes of its interpretation ; the ‘voluntarist–traditionalist’ view of the relationship between reason and revelation; textual segmentalism; and the lack of a thematic, principles  and aim-centred (maqāid) approach to Qur’anic hermeneutics. It also discussed the interpretational implications of the NTS manhaj of Sunnah.

The interpretational implications of these assumptions are found to lead to Qur’an’s interpretational reductionism and uniformity; de-emphasis of  the historical dimension of the Qur’nic revelation; to  a development of a hermeneutic premised on a view of  a fixed, stable nature of the meaning of the Qur’anic text residing in totality in the mind of its Originator leading to the development of  ‘minimalist hermeneutics’ i.e the idea that marginalises the importance of the reader in the process of interpretation; an interpretational theory that assumes  that it is possible to interpret Qur’anic text with complete objectivity; a manhaj which is not capable of hermeneutically distinguishing, in a systematic manner, between the universalist and socio-historically contingent elements of the sacred scripture; a manhaj which  considers the historically contingent  as part of the universal, meta-historical dimension of Revelation; a voluntaristic approach to the nature of ethical value in the Qur’an which was responsible for  infusing  the Revelation with a comprehensive legalistic ethos resulting in a  subsequent marginalisation its ethico-religious elements ; a manahj in which  the role of reason in interpretation of the text is minimal and which  ignores the Qur’an’s thematic coherence and underlying unity of the revelatory message. All of these, in turn, result in interpretational tendencies which are incapable of conceptualizing (or recognizing), or even undermining, the underlying purposeful, objective based approach to the nature and the character of the Qur’anic discourse and its interpretation. Lastly, the study concludes that the NTS Sunna manhaj  leads to the development of a  Qur’anic hermeneutic which , combined with the above pre-modern approaches to the Qur’nic interpretation , is hermeneutically depended upon the hadith, thus  severing the symbiotic hermeneutical relationship   between the Qur’an and Sunah that existed prior to the process of traditionalisation of Islamic thought and conflation of  Sunnah and hadith bodies of knowledge epistemologically and methodologically so that the latter was considered the former’s sole method of perpetuation and embodiment.

Based on this manhaj the NTS is found to subscribe to very specific  concepts of a ‘Believer’ and “Muslim Woman’. I demonstrate in the following  chapter that the NTS essentially ahl-hadith salafi revivalist manhaj, is responsible for  their construction of a  concept of a Believer that is restricted only to the historical Muslim community who recognised the claim of Prophethood of Muhammad, thus forming the view  that religious salvation was permanently not to be extended to any other  non-Muslim community such as the Jews and the Christians. In the same chapter with respect to the NTS concept of a religiously ideal ‘Muslim Woman’, the book’s finding is that such a concept was constructed in relation to that of a secluded and completely veiled Muslim woman whose primary, if not exclusive, functions are considered to be that of a wife and a mother and whose religious duty is to obey her husband at the cost of her religious salvation.

The delineating features of the progressive Muslim  manhaj which constitute the subject matter of the sixth chapter, are found to be  characterised as being  comprehensively contextualist/historical and holistic in nature , hermeneutically privileging ethico-religious values of the tradition such as justice and equality over the literalist (or at best semi-contextualist) hermeneutic embodied by the NTS manhaj and endorsing  the view present in the formative period of Muslim thought of not conceptually conflating Sunna and hadith bodies of knowledge. Based upon this manhaj I attempt to show, in the seventh chapter,  that the progressive Muslims  do not restrict the concept of a ‘Believer’ to the historical, reified community of Muslims and extend and recognise  salvific plurality as part of the Qur’an’s and Prophet’s normative teachings and with respect to their normative religiously ideal ‘Muslim Woman’ concept I assert that progressive Muslims  do not consider the practices of veiling, seclusion of women, gender segregation and husband’s  religiously sanctioned dominion over his wife  to be the part of the religiously  normative ‘Muslim Woman’  concept. Instead, I contended that they promote and advocate a an alternative concept   that highlights women’s complete autonomy and their full metaphysical, ontological, ethical, religious, moral and socio-political agency vis-à-vis the men.

The book’s concluding chapter discusses the continuing importance of studies examining this contested nature of the Islamic tradition dynamic and its historical roots is aptly summarised  with the following words of  Afsaruddin.

For the believing Muslim, this historical-hermeneutic project remains a worthwhile and even urgent today. Given the fact that Islam’s formative period remains contested among many, reclamation of this past in a responsible and historically defensible way must remain part and parcel of every contemporary reformist project that wishes to gain broad legitimacy and acceptance….this project of reclamation is being done more credibly today by those we have termed “modernist’ and/or “reformist” Muslims (called “liberal: or “moderate” by others) than by the hard-line Islamists. These modernists have imbibed more than a drop of their illustrious forbearers’ penchant for robust faith, creative thinking, and fidelity to core principles of their religion .In contrast, the illiberal and radical Islamists, for all their protestations to the contrary, have to a large degree undermined these core principles and betrayed the legacy of the earliest Muslims in their nihilistic quest for political power.[i]

Professor Khaled Abou El-Fadl argues in his important  book The Great Theft: Wrestling Ilsam from the Extremists ( Harper Collins,2005) that the future of Islam as far as Muslims go, for the next few generations will be defined by two  broadly defined approaches or schools of thought he refers to as modernists and puritans. He goes on to say that  question of interpretation will play an increasingly important part in terms of which one of these will set root among the contemporary and future generations of  Muslims.[ii]This book is meant to contribute to these debates.