Legacy of The Most Eminent Women Poets in Kashmir’s History 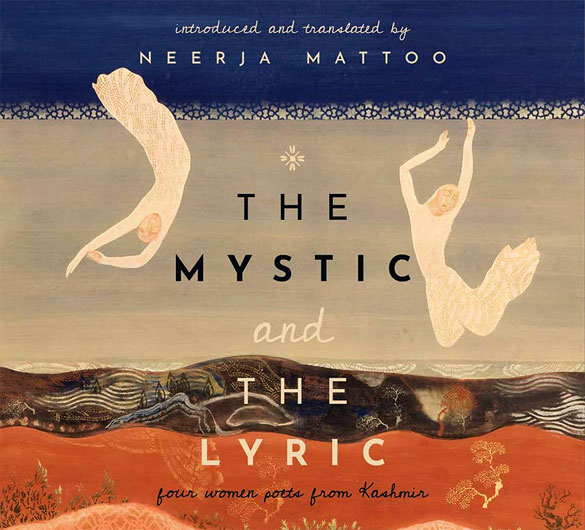 The Mystic and the Lyric; Four Women Poets from Kashmir

Introduced and translated by Neerja Mattoo

Kashmir’s women poets have suffered a strange fate. They have been celebrated, loved, respected, questioned, disputed, ignored, and distorted, all at once. The Kashmiri language in its contemporary shape owes its existence to a forsaken woman who remained a nobody for centuries. Subsequently, it were mostly the women poets in whom we found expression and through whom we spoke to ourselves. Though we have not had many women poets in our history but their role in making us who we are is more than immense. But there have been concerted efforts to send them off to oblivion on flimsy grounds.

The Mystic and the Lyric; Four Women Poets from Kashmir by Prof Neerja Mattoo is a fresh attempt at reclaiming the ever-vibrant legacy of the four most eminent women poets in Kashmir’s history – Lal Ded, Habba Khatoon, Rupa Bhawani and Arnimal. The book is beautifully designed and printed, dotted with the depiction of the Chinar leaf on every page. It is probably the first book of its kind on Kashmiri literature which is aesthetically satisfying too.

Lal Ded has been lucky in the sense that the translation of her vaakhs has been attempted several times before by orientalists and scholars like Sir Richard Temple, Pt Anand Koul Bamzai, and lately by Prof Shafi Shouq, Ranjit Hoskote, Jaishree Kak, among others. Passages from Habba Khatoon have been translated by scholars like Tariq Ali, et al. However, Prof G R Malik’s translation of Habba Khatoon, published by J&K Academy of Art, Culture & Languages, is the first translation of her whole poetic oeuvre with a comprehensive introduction to her person and poetry. Mattoo’s is the first attempt of neatly arranging, translating and threading together the four iconic women poets of Kashmir in a poetic mosaic for a wider readership in a global language.

There are four separate sections on the four poets, each having an independent introduction, besides the ‘General Introduction’ in the beginning.

As far as the translation goes, it is indisputably artistic. The whole book is a work of terse beauty, succinct cadence, and lilting inflection. Each word and expression has been diligently attended to and translated. Cultural expressions and sensitivities have been taken care of well with precision and detail. The translation reads like Kashmiri culture in transition from the indigenous to the global. The most touching part is that the translator, as her forte is, has preferred light words with musical patterns without compromising on authenticity. A few lines may illustrate the point:

Slander dogged me every step. (40)

Suffered storms of sorrow, I stayed with God. (42)

I asked in vain, exhausted, sunk

Till out of nothing, something came. (44)

What had you sown to expect a bounteous harvest? (47)

Repute and renown are water in a basket. (60)

Think deep and see the self in yourself.

Each line above from the section on Lal Ded makes one feel like reading Lal Ded for the first time. They read like timeless wisdom, similarly expressed in different cultures. The translator could have easily succumbed to the pull of fitting in the already available maxims in English. However, she has taken the trouble to even unsettle the established proverbs in English and rewrite them so that the originality of Lal remains intact. Doing this with such conscientiousness makes it clear that it is not a simple attempt at translation but is driven by a poetic passion coupled with a personal commitment to Lal’s vision and message.

The section on Habba Khatoon is equally pulsating with poetic zeal and linguistic precision along with the cultural nuances. Here are some lines which make even suffering look beautiful:

When the beloved himself cuts the ties

Sick and wasted, I trail your steps

Winter winds blow away my leaves

Your deafness make me a songless bird. (126)

The smooth flow in the translation at times sways the translator through some glaring flaws. Kretch (chicory leaves) has been translated simply as ‘herbs’ (p 99). Voge (attic) has been translated as ‘skylight’ (02). Nashe kiah rotnamay (showing attitude/throwing tantrums) has been translated as ‘he left me nothing but regret.’ (102) Mot leagith kot aam (how he came like a god-possessed/mentally deranged) has been translated as ‘why did he come like a man so mad.’ No doubt ‘mot’ in Kashmiri is a highly problematic word whose meaning could be decided by the context only. In the same vein, ‘sonn’ (rival wife of a husband with more than one wife) is a word which cannot easily be translated into English in a satisfactory way. Mattoo has translated it as ‘rival’ which to some extent conveys the psychological insinuations of the word. Such an exciting line as Chhav mean daanay posh has been regrettably translated as ‘O come, revel in the blooms’ which shears the original of its passion.

Similarly, Taab ishqun krooth pyom (‘But the weight of love is too much to bear.’ 117) could better be ‘the pain of love’.

The two sections on Rupa Bhawani and Arnimal are relatively smaller, probably carrying representative verses by these two poets. However, in the text there is no mention of this. Both the poets in varying degrees are deeply entrenched in the classical Sanskrit tradition, which in turn profoundly informs their diction, idiom, and expressions. Mattoo has done a great service to the duo by making them readable and comprehensible through translation.

While the ‘Introductions’ preceding each poet develop perspectives of sorts, the common ‘Introduction’ in the beginning is dotted with some ahistorical assertions, like identifying Islam as a faith with certain Muslims rulers and monarchs. Wading through the troubled waters of history is always pr Rajatarangani oblematic and the historical statements in this book are no exception.

There are strong historical and literary evidences suggesting that Islam had made inroads into Kashmir far earlier than initially imagined. In fact, sporadic references in Rajatarangani are said to suggest the existence of Muslim habitations in Kashmir, though in a rundown manner, even as early as Rajatarangani itself. Another link is Fatahullah Kashmiri’s copy of the Quran, indicating to the existence of Muslims in Kashmir earlier than the formal arrival of Islam in Kashmir as commonly believed. Further, it was a local Buddhist ruler Rinchen Shah who converted to Islam for personal reasons than for any historical exigency which is believed to have paved the way for Kashmir’s smooth transition to Islam.

At several occasions, Mattoo seems to treat Sufism as something beyond Islam. Sufism is essentially informed with Islamic teachings and preaches the same. Sufis have been the proselytising missionaries of Islam shorn of all connections with kings and monarchs who, according to them, had proved a great hurdle to the message of Islam. Sufism was a methodology – not a separate message –adopted for the preaching of Islam and to practice its humanitarian aspect which had been eclipsed through overemphasis on ritualistic aspects by its literalist followers. Sufism was adopted by the sincere followers of Islam after Islam was misappropriated by Muslim rulers and kings for their own petty ends.

Drawing a line between Islam and Sufism and at the same time describing a verse from the Quran, the basic source of Islam, as a Sufi quote (Verily we are for God and verily unto Him we are returning, page 8) foregrounds the contradiction in the premise. While discussing ‘Interface’ between the Sufis and the Kashmiris, the translator remarks that the “Sufis were Muslims who believed in the equality of all human beings” (page 9). Historically, it is Islam’s egalitarian outlook in general, and not that of Sufis exclusively, that has proved to be its most revolutionary part.

While discussing the Reshi order of Sufism (page 10), the author notes that “emphasis on non-violence and following the path of moderation is … suggestive of their Buddhist past”, implying thereby to its possibility of being immoderate and violent otherwise.

Referring to Lal Ded (page 12), the translator says, “To the old Hindu faith, she is a symbol of resistance to the new Islam, while to the new one, that of conquest of the old.” However, the fact remains that the beauty and the universality of Lal Ded is that she cannot be reduced to any ideological or religious frame. She defies all such attempts. She is a peaceful fusion of the two, giving birth to an aesthetic and cultural idiom that still makes us feel proud to be what we are. Applying the binary of ‘resistance’ and ‘conquest’ on her cosmic spirit sounds reductionist, to say the least.

While some issues mentioned in the ‘Introduction’ to Lal Ded are problematic, the questions raised in the ‘Introduction’ to Habba Khatoon are highly relevant and academically important. “Though she lived in a historically important time in Kashmir, in her verses we find no reference to events like the removal of the last Kashmiri king, Yusuf Shah Chak, and the annexation by the Mughal king Akbar – she is too wrapped up in her own affairs of the heart.” (86-87)

About Rupa Bhawani, the translator says that her “language … is a mixture of old Kashmiri, Sanskrit and Persian, mak(ing) the task more difficult. (144) “The vaakhs reveal a personality well-versed in the Vedas, the Upanishads, Vedanta and the most advanced Saiva philosophical thought.” (145) She further adds that “her poetry needs an intellectual response as much as an emotional one. . . . It is necessary to draw her out of the confines of sainthood in order to realize that she was not only a mystic, but a talented poet, an extraordinary woman of courage, whose real place in the history of Kashmiri literature and thought needs to be better researched and understood.”(152-153)

About Arnimal, the translator says that she suffered the fate of a forsaken wife (203) but remained a “poet of great romantic sensibility … concerned with here and now.” (204). She says that Arnimal “revolted through her act of speaking out about the subject of domestic violence” (205), describing her verses as “the wail of a victim of patriarchy in its various forms, in which there is no compassion, only mockery for a woman discarded by her husband.” (207) “While her husband, Bhawani Das Kachru, might have won some laurels at Kabul for his Farsi scholarship and poetic skill, his name in Kashmir is forever smeared by one woman’s softly-worded but powerful arraignment. (208)

Over-all, the book remains what it is –a signal feat of translating the poetic oeuvres of four defining women poets of Kashmir who remain relevant for a number of reasons in this age when literature is revisited to foreground the silent gaps, overwhelmingly imposed upon women. What could be a better favour to these women poets than this that a woman has finally translated them? Who can understand a woman better than a woman herself?

Original Headline: The feminine and the divine: an insight