How a Team of Indian Muslims Made History 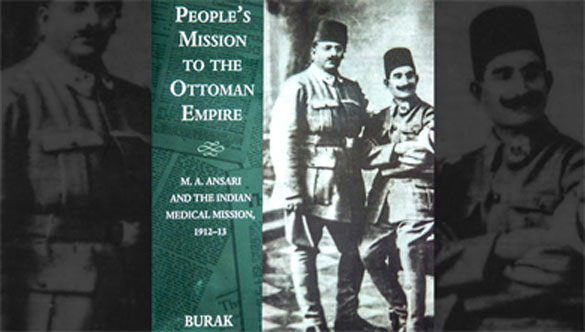 The book's jacket has a photograph of Mohammed Ali and Dr MA Ansari. This black and white photograph was published in the journal Comrade on January 5, 1913. (Photo: HT)

In 1912, during the ongoing Balkan War, there was a strong reaction in India against the Western onslaught on the Ottoman Empire by a group of Balkan countries.

Responding to this, Maulana Shaukat Ali, who later became a prominent leader of the Khilafat movement, appealed to Indians, especially Muslims, for funds to send a medical mission to the war zone. The Mission's aim was to render support to the wounded Ottoman soldiers.

Today, whenever we talk about a group of young Muslim men travelling across borders and fulfilling a religious responsibility, the discourse is about fighting what is popularly referred to as jihad, culminating in grotesque violence in the name of religion. And, whenever we talk about the caliphate--of which the Ottoman was the last, abolished in 1924-- the discourse is about the Islamic State of Iraq and Syria (ISIS), known for its atrocities in West Asia, proclaiming its re-establishment.

Thus, nothing can be more timely than an account of how a group of 25 young Muslim medical professionals from the subcontinent-'representing the flower of Mohammedan youth'-fulfilled their Islamic responsibility and expressed a sense of pan-Islamic solidarity, not through violence, but 'humanitarian and political internationalist activities' in the Ottoman Empire.

Turkish ambassador to India, Burak Akçapar, primarily, tells us that story, albeit building up too much of a context, sometimes.

In mid-December 1912, the Indian Medical Mission, led by Mukhtar Ahmad Ansari, left for Turkey to treat the wounded Ottoman soldiers of the Balkan wars of 1912-13. The motivation behind this Mission was 'a pan-Islamism peculiar to the nineteenth and early twentieth century'.

This pan-Islamism served the purpose of uniting the Indian Muslim community around a common idea and satisfying, what Akçapar says, 'their urge for action at a historical juncture when their displeasure with the British rule kept surging, yet their cohesion and indeed strength to resist it outright was solidly at bay'.

The idea of Islamic solidarity across borders, in turn, helped Indian Muslims 'find the fighting spirit in themselves', turning, thus, from 'internationalism to proto-nationalism'.

Mukhtar Ansari, a successful doctor of his times-the first Indian to be appointed as a resident medical officer at the Charing Cross Hospital in London-went on to become an influential political leader both in the Muslim League and the Indian National Congress. He was the grand uncle of the incumbent Indian vice-president Hamid Ansari and a staunch Gandhian.

The mission served in Turkey for about seven months, establishing two field hospitals and carrying out other humanitarian work. It captured the imagination of the Indian Muslims back home through MA Ansari's letters from Turkey which were published regularly between November 1912 and July 1913 in the English weekly journal Comrade. The journal was edited by Maulana Mohammad Ali Jauhar, who was also the 'proverbial intellectual and the rhetorical sinew' behind the Indian Medical Mission. Mohammad Ali was described by the writer HG Wells as a man who possessed 'the heart of Napoleon, the pen of Macaulay and the tongue of Burke'.

Under extremely challenging circumstances, the Mission set up the tents for its first field hospital at Omerli in early February 1913, which had the capacity to house 120-150 patients at a time.

The members of the Mission, writes MA Ansari in a letter, "in spite of the bitterest, and the severest winter when their tents were often completely snowed up and their camp was one mass of snow and mud, when the Turks themselves would not venture out of their houses", worked hard and cured the wounded.

In the course of the war, Ansari divided his mission into two parts-one would remain in Omerli and the other, under his leadership, would accompany Enver Pasha, the charismatic leader of the Young Turks movement, to the war zone of Gallipoli. The second hospital was set up in the town of Çanakkale, where in the month of March 1913 alone, the Mission treated 171 admitted patients and 101 outdoor patients.

When the Mission finally returned to Delhi on the evening of July 10, 1913, the railway station was packed with around 30,000 people who had come to catch a glimpse of Mukhtar Ansari and his teammates. People wanted to kiss their hands and garland them, for they had sacrificed to serve Islam.

MA Ansari's letters form the foundation of Akçapar's book, equipping him with reliable and detailed first-person accounts of the Mission and its work in Turkey. His letters, as published in Comrade, have been sequentially collected in an appendix at the end of the book. These letters, apart from chronicling the work of the Mission-the difficulties they faced, how Turkish officials helped them, and the concerns they raised-are also a treasure house of information about political developments in Turkey, records of Turkish life and culture, and vivid descriptions of picturesque landscapes.

Ansari's letters also showcase his multi-faceted personality as an able leader, diplomat and manager-travelling throughout Turkey to meet bureaucrats and politicians, chalking out plans to make the work of the Mission effective, managing the finances of the Mission, keeping abreast of the political developments, and in all this, finding time to write about everything in letters to Mohammad Ali.

Through the prism of the largely overlooked Mission, Akçapar shows us the larger picture. He explains how the mission offers a vantage point to study the circumstances of the Indian Muslims at a time when they were concerned regarding the future of the caliphate, the state of the Muslim world and the denigration of Muslim culture across the globe. Akçapar puts forward the right questions-why and how-to contextualise and analyse what happened, and while doing so, enriches the book's narrative making it an important piece of work for the cerebral.

The only thing amiss with the book is that Burak Akçapar has dedicated rather too many pages to provide a concrete context to the Medical Mission. Though the book is titled and based on the Medical Mission of 1912-13, a detailed account of the same comes only towards the end, with major initial portions being dedicated to a broad historical narrative. Had the history of the Balkan War or the relationship between Mughals in India and the Ottoman Empire been described to a lesser extent, this account of the exploits of Dr. Ansari and his team would have been a more enjoyable read.