Talking to Terrorists: Face to Face with the Enemy

Face to Face with the Enemy 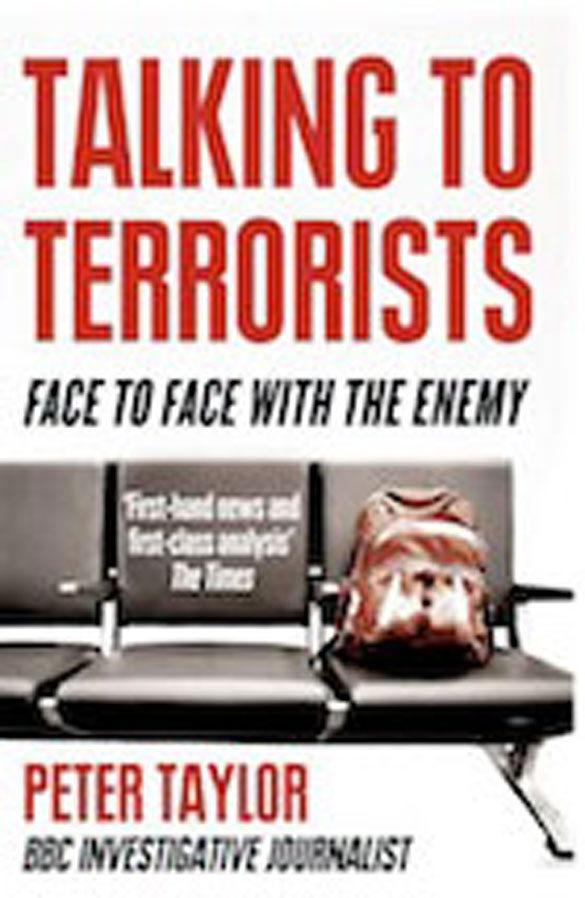 In his Meditations, the great Roman emperor and stoic philosopher, Marcus Aurelius had written; “Facts stand wholly outside our gates; they are what they are, and no more; they know nothing about themselves, and they pass no judgment upon themselves.” This aphorism is strikingly true in the case of BBC investigative journalist Peter Taylor’s latest book, Talking to Terrorists, which places before the world some hard (and hard-hitting) facts on terrorism and how it is being countered today. And it is up to us, the believers in justice and fairness, to use “our own guide and ruler, Reason” — to quote Aurelius again — and judge them. Lest we act in haste, Taylor cautions us that the word “terrorist” is not easy to define and is therefore effectively banned on the BBC World Service and Reuters. He himself tries to avoid using it in his work and sometimes puts it in inverted commas “to indicate a degree of equivocation” over its meaning.

Citing the Northern Ireland peace process, Taylor initiates his argument and points to how a seemingly intractable conflict was resolved when the British government recognised the reality “that it would have to talk to the IRA, and make the compromises necessary to bring the conflict to an end.” Keeping this as the template Taylor devotes the rest of the book — more than three-fourths of it — to al Qaeda, right from its conception “in the mountains and sand of Afghanistan” in the late 70s, down to the killing of Osama bin Laden in May 2011.

The crux of Taylor’s thesis is that retributive violence is no answer to extremism and that terrorists must be talked to in order to understand their motivation and to explore why they are prepared to kill for a cause, be it secular or religious. Taylor’s talents have clearly been honed by the vantage of his nearly 40 years’ experience in reporting terrorism. His insightful analysis, which exhibits such skills fully, is also an excellent primer for the youth to understand and ward off attempts by terrorist outfits at radicalising them through misinterpreted theology. It is also a warning to governments against resorting to torture under euphemistic sobriquets like “enhanced interrogation techniques” with the conviction that it is the only means through which information could be elicited from terrorists.

Part of Taylor’s penetrating scrutiny is the process of talking to terrorists face to face in their prison cells, and this is where he contributes the most to our understanding of the threat posed by organisations like the al Qaeda. Almost all the militants he interviews give one common reason for their radicalisation: blind US support to Israel, the presence of American troops on Muslim lands, and “Russian atrocities” against the Muslims of Chechnya. For instance, Salim Boukhari, a young Algerian Muslim serving a 12-year sentence in Germany for terror activities, laments that “to see the Palestinians suffering like this, it’s hard. Israel does what it likes and no one is trying to stop them. It isn’t fair. All the time America is helping Israel.” But what ultimately made Boukhari cross the Rubicon was the war in Chechnya, which he wanted to join “to fight the aggression of the Russians.”

Similar feelings, mostly against the US and Israel, are expressed by many others, including Abu Bakar Bashir of Jemaah Islamiyah and a former Guantanamo detainee whom Taylor is allowed to meet at a Saudi rehabilitation centre in Riyadh, on the condition that he will not name him. When asked by Taylor if he was a terrorist, this “most hardened former jihadi” denied it vehemently, saying; “I didn’t kill any women, children or innocent people. That’s what the Israelis are doing in Gaza and the US in Iraq.”

Although Taylor strongly denounces the violence unleashed by al Qaeda, he feels that engaging such outfits may be the only way forward. According to him, elements of the aforementioned reasons for war against the West must be “up for discussion”, particularly the withdrawal of Western forces from Iraq and Afghanistan, and a reduction in America’s support of Israel.

The invasion of Iraq, says Taylor, without a shred of evidence to link Saddam and 9/11, provided Osama with an opportunity to recruit more supporters for his cause. As proof, he quotes the evidence Baroness Manningham-Buller gave to the Chilcot Inquiry, where the former Director of MI5 stated: “Our involvement in Iraq radicalised … a whole generation of young people … who were attracted to the ideology of Osama Bin Laden …” But the US continues to ignore these facts.

But the most chilling fact that Talking To Terrorists brings out is the use of “enhanced interrogation techniques” (EITs) that were authorised by the Bush administration in the wake of 9/11. These included physical torture such as water boarding, tying a dog leash to the detainee’s chain and leading him through a series of dog tricks, sleep and toilet deprivation, facial and abdominal slaps, electric shocks and beating the testicles with a metal rod. As if this was not enough, the detainees were psychologically tormented by insults to Islam and desecration of the Quran. Taylor reproduces the damning conclusion of the Senate Armed Services Committee, which included John McCain as a senior member. The Committee, in its December 2008 report, conceded that it was the “top officials” who authorised such torture and that America needed “to own up to its mistakes so that we can rebuild some of the goodwill that we have lost.”

More recently, the UN special Rapporteur of torture, Juan Mendez, accused the US government of cruel, inhuman, and degrading treatment towards Bradley Manning, the US soldier who was arrested in May 2010 on charges of being the WikiLeaks source. Mendez reveals that the US military kept Manning under solitary confinement for 23 hours a day over an 11-month period. Expressing shock and disappointment at such iniquitous practices, Taylor cites his interviews with FBI interrogators Edward Needham, Ali Soufan and Steve Gaudin (who had de-briefed several terrorists) to prove that torture to elicit intelligence is counterproductive and hence, not the way to deal with terrorists, although it may yield results occasionally.

But the recent Quran burning incident at a US military base and the ruthless massacre of 16 unarmed civilians (including women and children) by an American soldier, both in Afghanistan, clearly show that lessons have not been learnt. This makes Peter Taylor’s thesis all the more relevant.

Acknowledgement: This review first appeared in the DNA newspaper on April 8, 2012

A. Faizur Rahman is the Secretary General of Islamic Forum for the Promotion of Moderate Thought.