COMMUNITY AND CONSENSUS IN ISLAM 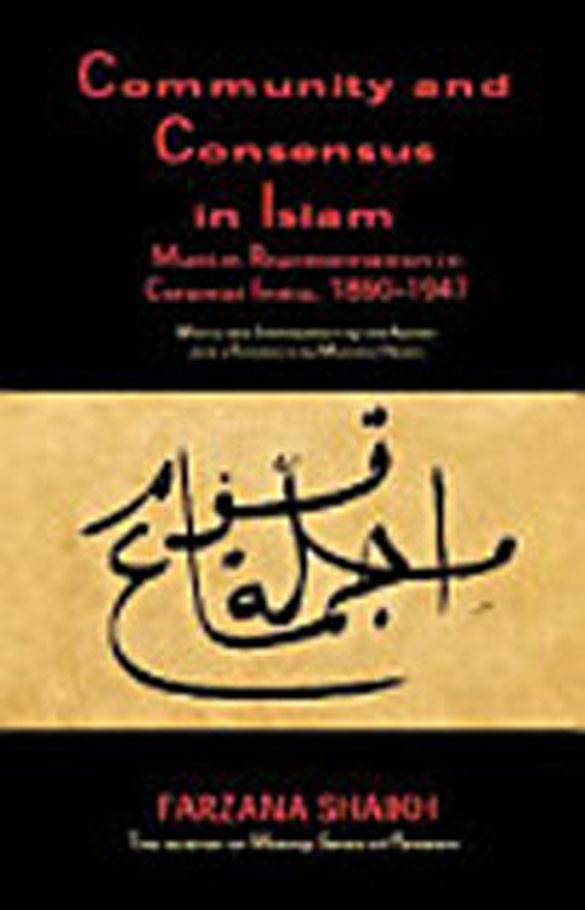 The partition, without a doubt, was the worst disaster to ever hit India. Its enormity can be guessed from the lamenting, unanswerable cry of a devastated victim: Khoon pani kis tarha hota hai tum jaano agar/Mere aansoo apni aankhon se bahakar dekhlo! (If you think you know how blood turns into water/Try shedding my tears through your eyes!)

Joining the long list of commentators and historians who have tried to unravel the truth behind this dark period in Indo-Pak history is Farzana Shaikh whose book Community and Consensus in Islam has just been re-published with an interesting foreword by the Director-General of National Archives of India, Mushirul Hasan. But it must be said that although her study is based on solid research it does suffer from the infirmity of drawing the wrong conclusions from an array of right facts.

Shaikh’s case is that India’s partition was the result of the sense of superiority of “a class of important political players” from among the “literate and well-born (ashraf) Indian Muslims” whose religious thought had convinced them of the greatness of the “Muslim moral community” and its separateness from the non-Muslims. Therefore, how could such a distinguished body of people (Umma) imagine themselves living in a post-independence India where no “weightage” would be given to their “divinely endorsed” right to rule, and where “brute force of numbers” or “a fickle vox populi” would be the sole determinant in all decision-making processes?

In an attempt to prove that the idea of Muslim separatism had a basis in Islam, Shaikh embarks on an extensive hermeneutical expedition into contentious juridical concepts such as ijma, qiyas, sunna, shura and shariah. For instance, she claims, quoting poet Iqbal, that the Shariah (which includes the other four aforementioned concepts) is the organising principle of Muslim collective life and the “inner core without which the Community is like scattered dust.”

It is obvious here that Shaikh has confused Islamic beliefs with Muslim politics. Mushirul Hasan does not mince words when he points out in his foreword that “some of Farzana Shaikh’s generalisations are overdrawn” and warns that unless they are “verified through regional and local studies, their accuracy will remain unknown.”

It can be shown that in the context of partition politics Muslim dogma was never invoked although Shaikh tries to prove to the contrary. She claims, citing E.I.J. Rosenthal, one of the main reasons for even modernists like Sir Syed Ahmed Khan and Syed Amir Ali to oppose the British proposal of representation was their espousal of a political tradition that was grounded in the religious and ethical teachings of Islam.

This charge lacks credibility because there is no evidence of these reformist scholars ever having articulated their political views in terms of their religious faith. Sir Syed’s entire focus was on Muslim literacy because he felt that until his community acquired modern education it would not be in a position to take up any political responsibility in India. For this reason he did not want the Muslims to demand separate electorates also; and he was right.

After Macaulay replaced Persian with English as the official language — with a view to producing “a class of persons, Indian in blood and colour but English in taste, in opinion, in morals and intellect” — Muslims were so demoralised that they shunned English in protest. Ram Gopal in Indian Muslims: A Political History writes that in 1880-81 only 363 Muslim students studied in English high school as against a whopping 36,686 Hindu pupils! And in 1878 there were 3155 graduate and post-graduate degree holders among the Hindus but just 57 on the Muslim side.

On the questions of separate electorates and Hindu-Muslim parity in the government too Shaikh repeats her charges ignoring several controverting factors. She writes; “At the heart [of Muslim conception of political power] lay the belief that Muslims were endowed with superior moral attributes which derived from their unquestioned obedience to God’s Law and which qualified them especially for power.”

Once again, it is a poor attempt to read religion into Muslim politics. Perhaps the answer to the Shaikh thesis lies in H.M.Seervai’s Partition of India: Legend and Reality which uses, to devastating effect, the most authoritative evidence in the 12 volumes of Transfer of Power 1942-7 documents (published by the British government between 1970 and 1983) to explode myths about partition.

However, there is no mention in Seervai’s narrative of Islam being exploited by the Muslims to achieve their political goals. But Seervai does cite instances of anger against Gandhi for infusing religion into his politics such as the resignation of Annie Besant from the Home Rule League (HRL) on charges of it of having become “intertwined with religion”, and the walking out of Jinnah from HRL for the same reason.

Nevertheless, Seervai opines that partition became inevitable for the following reasons; a) Nehru’s refusal in 1937 to honour the Lucknow Pact his party had signed with the Muslim League in 1916 accepting separate electorates for Muslims, b) Gandhi’s rejection of Jinnah’s post-1937 elections appeal to facilitate an “honourable” Hindu-Muslim settlement saying that he (Gandhi) saw only an “impenetrable darkness” on that front, c) Congress’s repudiation of the Desai-Liaquat Ali Pact of 1945, d) Congress’s rejection of the Cabinet Mission Plan.

Seervai writes that the idea of a separate state did not enter Jinnah’s mind till Nehru’s renunciation of the Lucknow Pact in 1937 which casts doubts on the theory that Muslim League’s politics was informed by religion. Mani Shankar Aiyar points out in his Pakistan Papers that when in 1930 Iqbal made the demand for a separate Muslim state there was not even the minimum quorum of 75 members present at the Muslim League session. In any case, Jinnah did not take Iqbal’s suggestion seriously till 1940 when he formally asked for Pakistan. It is no wonder that two prominent Hindutva ideologues, L.K.Advani and Jaswant Singh, considered Jinnah to be secular.

The answer to what made the secular-minded “Ambassador of Hindu-Muslim unity” to resort to petty communalism after 1940 can be read between the lines in Maulana Azad’s India Wins Freedom where he quotes Jinnah as arguing; “if the Congress could change so many times while the British were in the country and power had not come to its hands, what assurance would the minorities have that once the British left, the Congress would not again change and go back to the position taken up in Jawaharlal’s statement [of 10th July 1946 rejecting the Cabinet Mission Plan].” It is also Seervai’s argument that “Jinnah’s policies must be judged as a reaction to the policies of the Congress and its leaders.” What Jinnah was actually scared of was the Hinduisation of India. Gandhi’s grandson, Rajmohan Gandhi, concludes in his book Understanding the Muslim Mind that, “Congress’s inability to speak in an Indian rather than a Hindu idiom gave fillip to separatism.”

Finally, the biggest proof that negates Farzana Shaikh’s hypothesis is the presence of the world’s second largest Muslim population in India. This was possible only because the majority of Muslims at the time of partition did not allow religion to define their nationality and chose to remain in this country thereby affirming their belief in the concept of unity in diversity. It may not be inappropriate therefore to recall a pithy couplet by Faiz Ahmed Faiz which kind of captures the improbability of Farzana Shaikh’s assertions.

(She has found that issue to be most offending

The one that did not figure in the entire tale)