Bleeding Green: The Rise And Fall Of The Islami Jamiat Taleba

The Islami Jamiat Taleba (IJT) is one of the largest and most organised student organisations in Pakistan. From the 1970s till about the early 1990s it was also the main ideological engine powering the concept of Political Islam on the country’s university and college campuses. 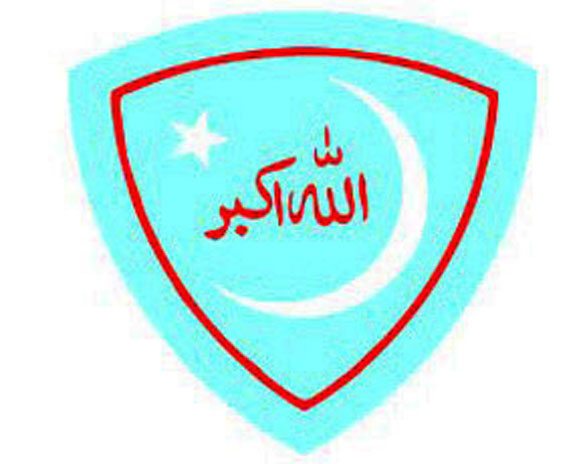 It is the student-wing of the fundamentalist Jamat-e-Islami (JI), and it was formed by the party in December 1947.

Originally conceived as a student-based Islamic evangelical outfit, it was in 1958, or right after the imposition of Pakistan’s first martial law (by Field Martial Ayub Khan), that IJT jumped into the fray of student politics.

The IJT was instructed by the JI leadership to persuade neutral students to agitate against the Ayub dictatorship’s overwhelmingly secular legislation and to challenge the domination of leftist student organisations in educational institutions. 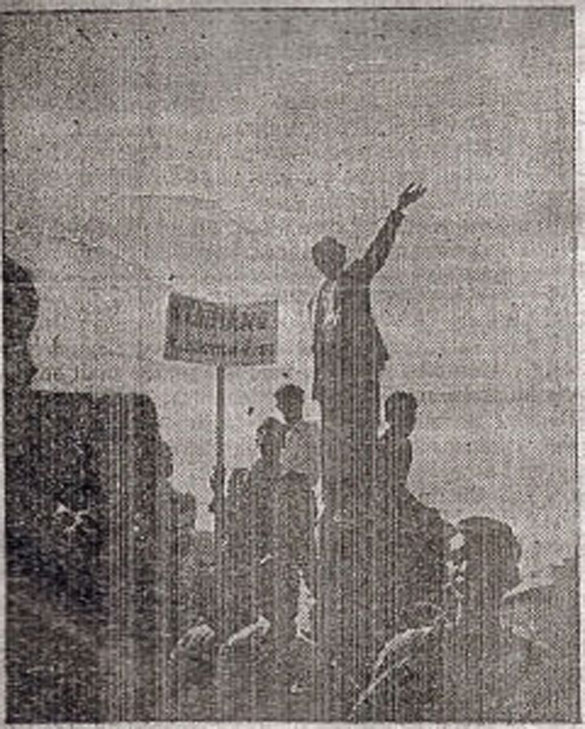 Though it continued coming second best in most student union elections in the 1960s, it was successful in achieving a strong foothold in Pakistan’s two major universities, the Karachi University and Punjab University.

Directly pitched against the leftist NSF, IJT however, joined the latter’s lead during the NSF-led student movement in the late 1960s against the Ayub dictatorship.

Nevertheless, after the sudden and dramatic rise of leftist political parties like the Pakistan Peoples Party (PPP) in West Pakistan and the Bengali nationalist Awami League (AL) in East Pakistan, JI and IJT let loose an onslaught of propaganda against the PPP and the AL.

This was done through rallies and by distributing large quantities of literature authored by JI chief and famous Islamic scholar, Abul Ala Maududi, against socialist ideas, and against the politics of provincialism that was taking shape among Sindhi, Pushtun, Baloch and Bengali nationalists.

The tense atmosphere that had engulfed campuses across Pakistan during the anti-Ayub movement triggered a number of clashes between IJT and NSF. 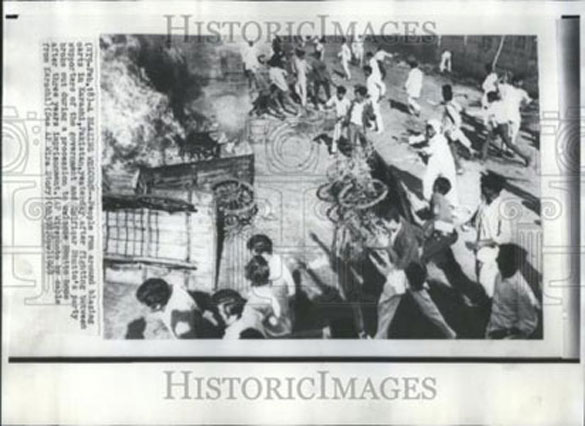 By the time Ayub resigned and handed over power to General Yahya Khan in 1969, JI and IJT were accused (by the leftists) of being co-opted by the new military regime to help it curb the rising influence of PPP and AL.

Though like the Ayub regime, Yahya’s dictatorship was also secular in orientation, a number of political historians are of the view that the Yahya administration financially and logistically supported JI’s campaign for the 1970 general election.

What followed were a series of rather ironic episodes. As JI, in spite of gaining the backing of the government and state-owned press, suffered serious defeats at the hands of secular and left-leaning parties in the election, IJT began to regularise its winning performance in the country’s major universities.

Whereas JI had lost face and influence after the election, its student-wing on the other hand actually rose to become the country’s leading and most organised political student outfit. 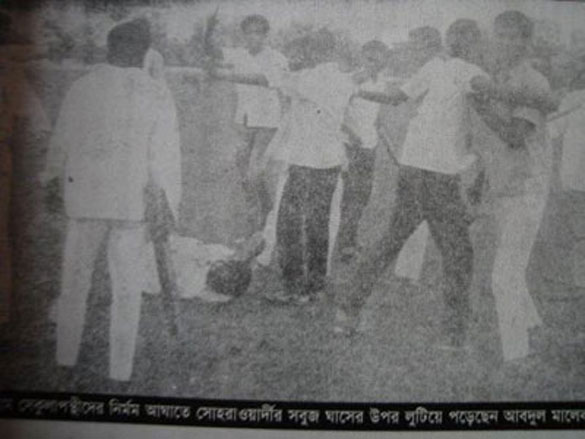 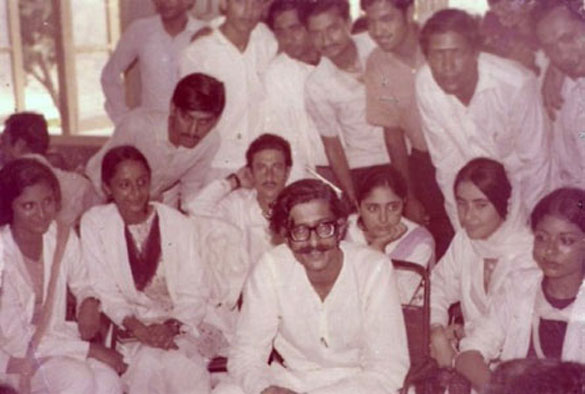 Also, when the campus progressives were embroiled in a number of petty ideological tussles among themselves, IJT cleverly used its organisational skills to help new entrants to universities and colleges to acquire books and lodging.

The number of students arriving from the country’s smaller cities and villages to join universities and colleges in the main urban centres had begun to increase from the late 1960s onwards, and this large section eventually became IJT’s leading constituency during union elections.

What’s more, though holding ‘study circles’ in which ideology was imparted to new entrants was a concept once largely used by leftist student groups, IJT adopted it in a more effective manner.

New entrants to universities and colleges were invited to study circles in which senior IJT members would help the students with their studies and then slip in literature culled from the writings of Abul Ala Maududi and Egyptian radical and Islamist, Syed Qutb. 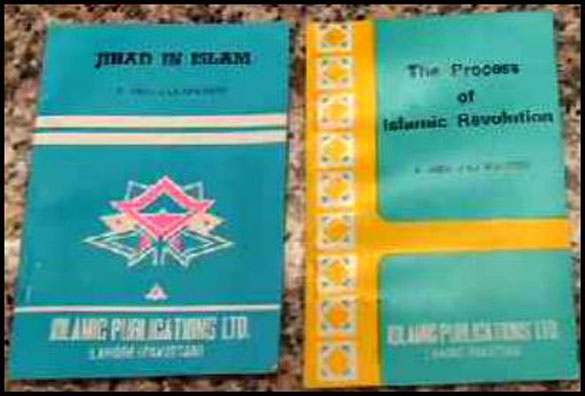 By the mid 1970s, though, the left-leaning PPP stood almost unchallenged in the country’s parliament, IJT on the other hand, was well in control of almost all the major student unions of the country.

Unable to check the electoral rise and influence of the IJT, diverse progressive student groups began striking electoral alliances between themselves.

The 1970s also witnessed the reconvening of a radical but obscure militant faction of the IJT that was originally formed in the 1960s but was more aggressively revived in the next decade – especially after the breaking away of East Pakistan in 1971 through a bloody civil war, and in which many IJT members actively and physically facilitated the Pakistan Army during its unprecedented violence against Bengali nationalists.

The two organisations constructed (by the state of Pakistan against East Pakistani nationalists) mostly comprised of IJT militants and were called Al-Badar and Al-Shams respectively. 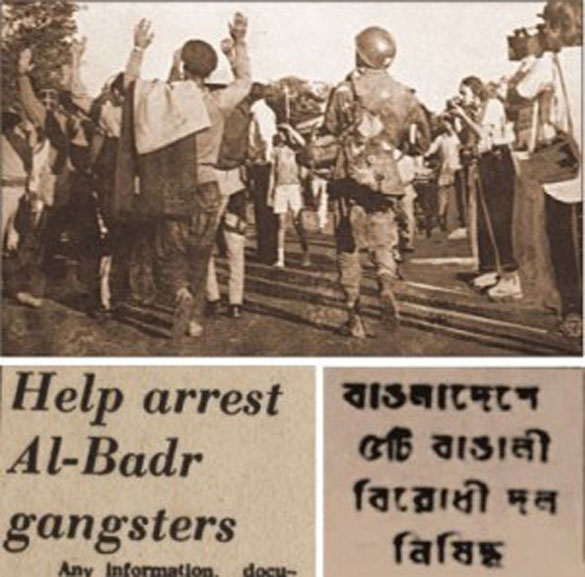 The militant faction was called the Thunder Squad and it reappeared on campuses with the mission to ‘cleanse educational institutions of immoral activities.’

Thunder Squad personnel often used strong-armed tactics and regularly clashed with members of anti-IJT organisations. But since the 1970s in Pakistan were largely a liberal period, Thunder Squad activities began costing IJT its democratic credentials and then eventually the student union elections.

IJT was also at the forefront of the 1974 anti-Ahmedi movement in the Punjab. The movement demanded that the government declare the Ahmedi community as non-Muslim.

After days of violence against Ahmedis, their business and places of worship, the government finally agreed to declare the community as non-Muslim and thus a ‘minority.’ 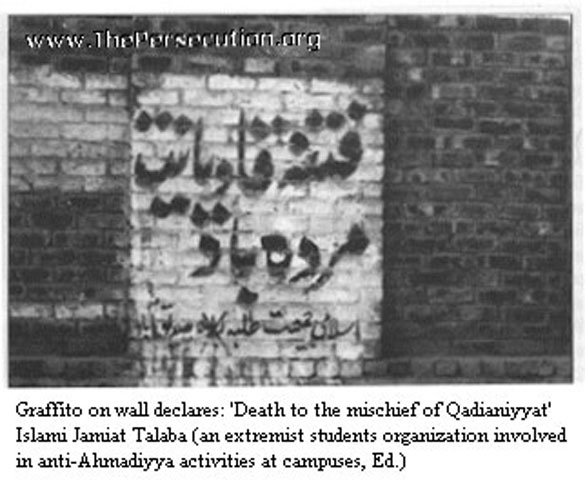 A 1974 wall graffiti in Sargoda chalked by IJT members against the Ahmedis.

In 1975 IJT suffered heavy defeats in student union elections at Karachi University and in the colleges of Lahore. 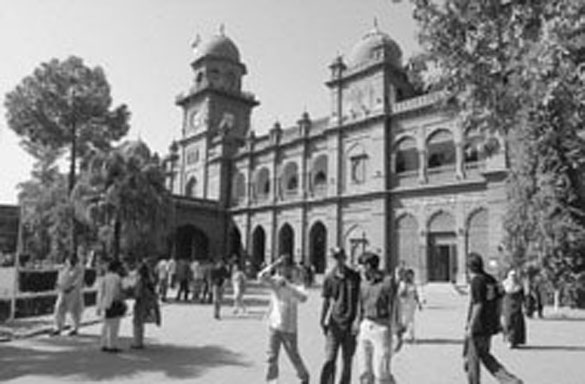 Election Day at the Peshawar University in 1975.

But IJT’s electoral debacle was short-lived. It regained the ground it had begun to lose in 1975 when after the JI-led right-wing alliance, the Pakistan National Alliance (PNA), began a widespread movement against the Bhutto regime in 1977.

The PNA movement was strongest in Karachi and Lahore. IJT played a leading role in organising the students during the movement. Apart from attacking the police, IJT processions also attacked nightclubs, bars and shops selling alcoholic beverages. 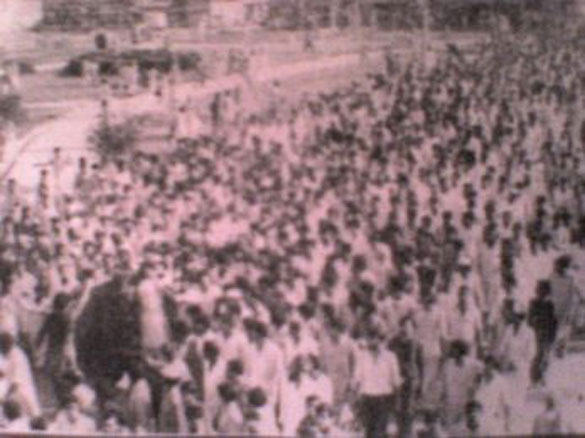 The character of student politics in the country became increasingly tense and violent after General Ziaul Haq toppled the Bhutto regime in a military coup in July 1977.

Consequently, the new regime also began patronising the IJT by using it to violently curb the activities of anti-Zia student outfits.

Though IJT had achieved a fresh burst of respect for the role it had played during the PNA movement, it gradually began to lose electoral ground and support when (on the behest of its mother party) it supported the Zia dictatorship, and willingly became the regime’s whipping boys against anti-Zia student groups.

Between 1978 and 1983, as IJT got embroiled in a number of complex situations – from regularly clashing with opposing student groups to getting involved with certain Pakistan-based Afghan Islamist outfits – it steadily began to lose votes that it had worked so hard to secure across the 1970s. 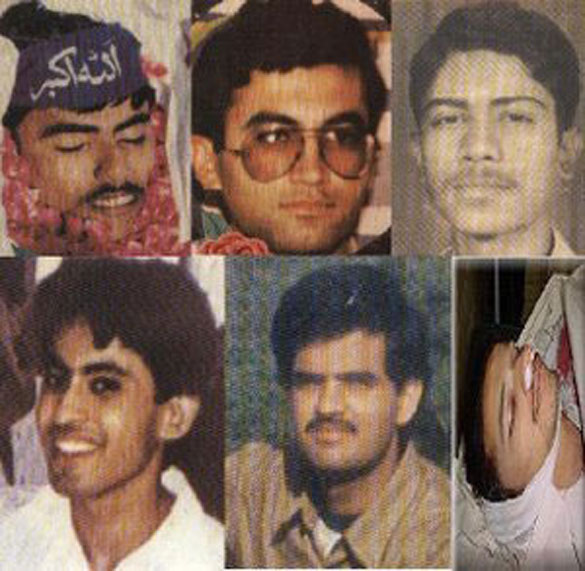 A montage of IJT members killed in clashes with leftist student groups in Karachi between 1979 and 1983.

The culmination of IJT’s electoral and ideological deterioration finally arrived in the shape of the countrywide defeats its candidates suffered in almost all the major colleges and universities of the country during the 1983 student union elections. 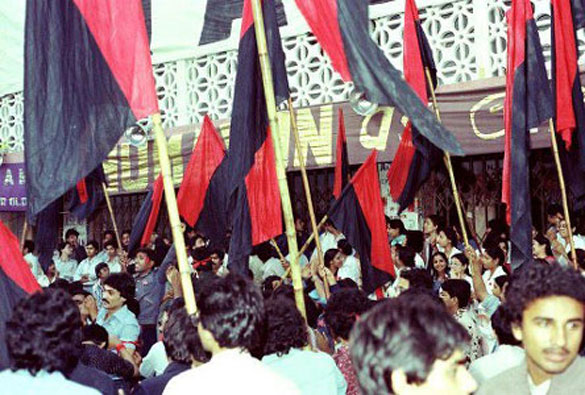 These were also the last countrywide student union elections to be held in Pakistan. Alarmed by IJT’s defeat as well as by the way certain sections within the IJT had begun to criticise IJT’s mother party for its overt support to the Zia regime, Zia banned the student unions. 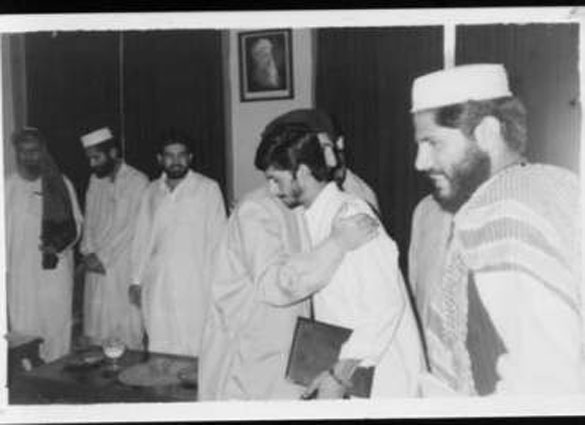 A IJT delegation meeting with a group of anti-Soviet Afghan Jihadists based in Peshawar.

The ban did not really affect IJT. It was allowed by the regime to operate a lot more freely on campuses compared to other student organisations. But the damage done to IJT’s reputation had already taken its toll.

In Karachi IJT’s position began to be seriously tested and challenged by the Mohajir-centric All Pakistan Mohajir Students Organisation (APMSO).

In the Punjab where (after Zia enacted a more conservative version of the Pakistan Muslim League), the party’s student-wing, the Muslim Students Federation (MSF), began to muscle its way into IJT’s strong-holds.

Numerous episodes of violence took place between IJT and APMSO and IJT and MSF between 1987 and 1994.

When the Zia dictatorship ended with his assassination in 1988, the new regime led by PPP chairperson, Benazir Bhutto, lifted the ban on student unions.

Union elections were held in 1989 in the Punjab and Khyber Pakhtunkhwa. Apart from at the Punjab University, IJT lost badly, mainly to Peoples Students Federation, MSF and against the more ‘moderate’ Islamist student outfit, the Anjuman Taleba Islam (ATI).

Though the Thunder Squad collapsed on itself, the violent tendency within the IJT returned again in the early 1990s, this time outside the campuses.

A section of the organisation formed the Allah Tigers; a vigilante group of hooligans whose task was to attack cultural events it deemed ‘un-Islamic.’

The Tigers were disbanded by the JI in the mid-1990s.

IJT remained unaccustomedly quiet during much of General Parvez Musharraf’s dictatorship (1999-2008), a regime it otherwise accused of being against ‘Islamic interests.’ 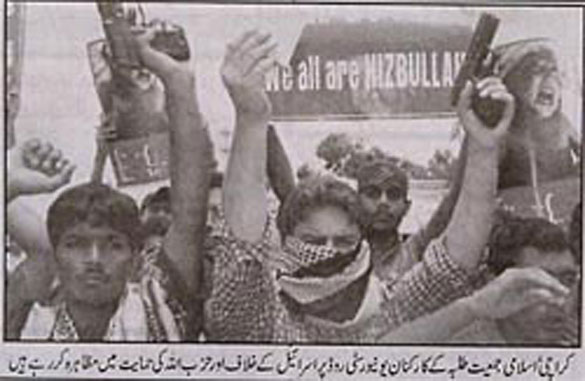 However, it did reactivate itself at the fag-end of the dictatorship, and today it is in the forefront of organising rallies against Pakistan’s alliance with the US – the same country it had worked very closely with and had supported during the Cold War, and especially during the ‘anti-Soviet Afghan jihad.’

Recently there has been a growth of some highly militant sections within the IJT, or sections that openly support Islamist terrorists like Osama Bin Laden and the Taliban. 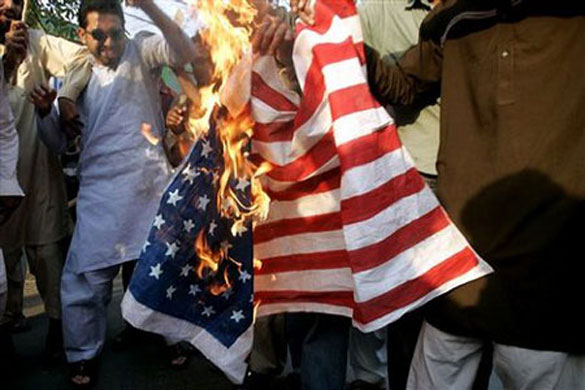 But largely the IJT currently is merely content in keeping the (albeit unelected) hold it has over the Punjab University and in some colleges of the Punjab.

Though still one of the largest conventional student political groups in Pakistan, IJT now seems to be a pale reflection of its former self. It is unfortunate that IJT’s history of violence and support for Zia’s brutal regime seemed to have stood out more in the telling of its legacy compared to the rich democratic credentials that it demonstrated in the 1960s and 1970s.