Muslims Challenge Al-Baghdadi’s outrageous Message: Islam is indeed a religion of peace, those who don't believe it are beyond the pale of Islam

Dallas, Texas – May 18, 2015. Al-Baghdadi, the self proclaimed Caliph of ISIL released an audio message on May 14, misrepresenting the values dearly held by millions of Muslims for fourteen centuries.  He said, "Islam was never a religion of peace. Islam is the religion of fighting” and added, “It is the war of Muslims against infidels."

Mike Ghouse, President of America Together Foundation said, “Al-Baghdadi has angered the entire Muslim world, no one thought he would stoop that low to flip the entire religion to suit crimes against Muslims and non-Muslims alike.  My concern is not only his lunatic statement, as many such men have come and gone, but it is the joy expressed by the war mongers that concerns me. It is, as if Baghdadi has reaffirmed their (false) belief about Islam, and now they can continue to malign Islam.”

We are just coming out of the two longest wars; they not only destroyed Iraq and Afghanistan, but cost billions of dollars and affected thousands of lives here in America.  Now the war Mongers want to put boots on the ground again in the Middle East that is not acceptable.

Al-Baghdadi is a narcissistic dude and is for himself.  The truth is Quran advocates justice with mercy.  It directs the humanity to build cohesive societies where no human has to live in apprehension or fear of the other.  A few verses are referenced below.

The entire Muslim world has condemned Al-Baghdadi,  even the rival countries like Iran and Saudi Arabia have condemned, the OIC representing all of the 57 Muslim nations, British Muslims and American Muslims have condemned it. References are given below.

I hope that we capture Al Baghdadi and his soldiers and put them on trial.  We need to demand proof from Al-Baghdadi to produce support for his claim that, “It is the war of Muslims against infidels” from the Quran.  We hope the world will see that it is neither Islam nor the Quran, it is the bad guys.  The world should not let go of this opportunity to put the ISIL ideology die its own death.  We also urge the war-mongers among us to stop looking for excuses to destroy world peace. 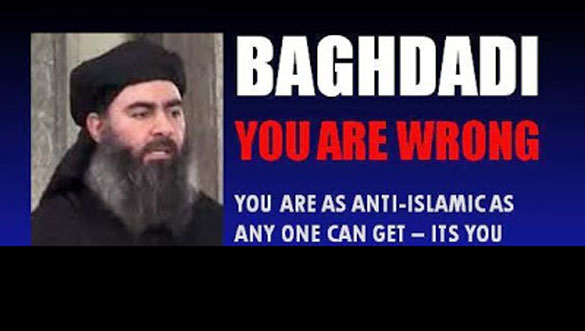 Baghdadi may have a force of 31,500 his side, and thus far he is the only spokesperson for the group, indeed he is the driving force for this self proclaimed rulership. Threat Matrix reports, “Islamic State fighters in Iraq and Syria number around 20,000 to 31,500 — a figure far higher than previously estimated, the Central Intelligence Agency has said.”

Iran: Ali Shamkhani, the secretary of Iran’s Supreme National Security Council, addressed the victories of the Islamic State of Iraq and al-Sham (ISIS) against a fleeing Iraqi military in a meeting with Syria’s ambassador to Iran. “The expansion of terrorist elements of [ISIS] and their violent acts in Iraq was a warning for the region,” Shamkhani said. “There is a need for attention and action from governments and the international community.”

USA: On August 15, 2014, the World Muslim congress had called on Muslims to Dedicate Friday Sermons for the Safety of Christians, Yazidis, Shia and Other Minorities at Huffington post. World Muslim Congress of Dallas has urged Obama to go ahead degrade and destroy ISIS in an op-ed at Huffington Post on September 4, 2014.  Just about every American Islamic and Muslim organization has condemned it.  ING has compiled the list.

UK: Huffington Post reported, 100 Sunni and Shiite Imams from the U.K. came together to produce a video denouncing the Islamic State, releasing a statement that they wanted to “come together to emphasize the importance of unity in the UK and to decree ISIS as an illegitimate, vicious group who do not represent Islam in any way.”

OIC - The Organization of Islamic Cooperation represents all the Muslim majority nations: The Islamic State Has “Nothing to Do with Islam,” Has Committed Crimes “That Cannot Be Tolerated.”

Quran remains a pristine, inclusive book of wisdom committed to building cohesive societies, where no human has to live in apprehension or fear of the other.

Quran (55: 1-13):  God created an integrated and interconnected world in harmony and balance, and wants us to preserve and maintain that balance.

Quran; (5:32) (Asad) “Because of this did We ordain unto the children of Israel that if anyone slays a human being-unless it be [in punishment] for murder or for spreading corruption on earth-it shall be as though he had slain all mankind; whereas, if anyone saves a life, it shall be as though he had saved the lives of all mankind.  And, indeed, there came unto them. Our apostles with all evidence of the truth: yet, behold, notwithstanding all this, many of them go on committing all manner of excesses on earth

Quran: (1:1 and 114:1) From the very first verse in the first chapter to last chapter is addressed to the humanity, all the humanity.  Quran is a book of guidance for all.

Quran (49:13) (Asad) “O men! Behold, We have created you all out of a male and a female,  and have made you into nations and tribes, so that you might come to know one another.  Verily, the noblest of you in the sight of God is the one who is most deeply conscious of Him. Behold, God is all-knowing, all-aware.”