Demolishing the Green Dome may spell doom for the Saud Daynasty

Custodian is one who protects, not one who destroys

Have the Sauds built toilet over the grave of their grandfather Saud?

Protests against the planned and apprehensively impending demolition and destruction of holy sites in Madina have gained momentum in India of late. Disturbing news have been pouring in about the expansion plans in the Mosque of the Prophet (pbuh) in Madina that have been chalked out by the Saudi government. According to unconfirmed news, the Saudi government plans to demolish the Green Dome (Gumbad-e-Khizra) of Masjid Nabawi as part of their expansion plans to accommodate more visitors and pilgrims. 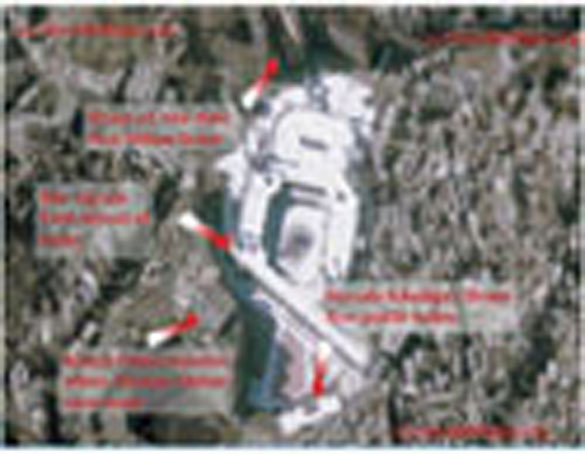 The Green Dome and the Mausoleum of the holy Prophet (pbuh) is the most revered sacred place in Islam after the Kaaba in Makkah. But the news about its impending demolition by the Saudi government has sent shock waves across the Muslim ummah all over the world and they have burst out in protest. In India, all the sects of the Muslim community have expressed their anger and anxiety over the news as demolishing the Green Dome and three mosques of holy companions will mean the demolition of sacred symbols of Islam and its rich cultural heritage.

India which is the home of one of the largest Muslim population in the world sees this move by the Saudis as very uncalled for and condemnable. Nearly all the sects of the Muslim community have been protesting the plans of the Saudis to wipe out each and every sign of Islam from the land where it originated in the name of Puritanism.  The Green Dome and other mosques that are a part of the Masjid Nabawi and are the most revered places after Kaaba face extinction or modification.

The plan to demolish the Gumbad-e-Khizra is almost the culmination point of the demolition spree of the Saudi government spread over almost a century which is guided by the Wahhabi ideology which only a small part of the Muslim world subscribes to. But the Saudi government considers this ideology the only true representative of the original Islam propagated by the holy Prophet(pbuh) During the last 90 years the Saud dynasty has razed almost 1000 places of historical importance relating to the holy Prophet (pbuh), his sacred and revered wives (mothers of the ummah), the holy companions and other sacred relics such as mosques built by the holy Prophet (pbuh) during the wars and ghazawat.  In this way, the Saud dynasty have all these years worked towards deleting all the signs of Islam in the land where it originated.

But the Muslims all over the world see this tendency or ideology of the Saud dynasty as an insult to the beliefs of the Muslims outside Arab. The logic of the Sauds behind the destruction of this sacred relics is that they lead the Muslims to shirk but the Muslims across the world feel that expressing reverence or love to the holy Prophet (pbuh), ahl-e-bayt, his holy companions and his revered wives (as their mothers) does not tantamount to shirk. If it were so, every son would be a mushrik and every mother or father would be a mushrik (as they have great love for their sons and daughters). Shirk is about inner beliefs and not about outer manifestations. It’s only a small population living in and around Makka and Madina about whom the Saud dynasty may doubt practising shirk. The entire global Muslim population does not lived there. They only revere the Green Dome and other holy personalities of Islam resting in Jannat al Baqi and in Masjid Nabawi. How can then the Saud dynasty assume that a Muslim living in a village in India or for that matter in Timbuktu practises shirk imagining the Green Dome. Or does the Saud dynasty think that all other Muslims except them are vulnerable to shirk in the presence of the Green Dome and other holy relics of Islam?

The Saud family should realise that Islam does not belong to them alone and it is not their intellectual property. The kaaba and Masjid-e-Nabawi with all the other sacred religious and cultural heritage of Islam belongs to Islam as a whole and belongs to the entire Musliim community on earth. Destroying the sacred buildings on the basis of their own narrow religious interpretation or ideology would spark worldwide outrage among the Muslims and it would shake their kingdom which in itself is not Islamic. If they are so obsessed with the Islamic principles, they should first renounce their kingdom and hand over the custody and management of the two mosques to a shura comprising the members selected from the Muslims the world over.  The two holy mosques are not the personal property of the Saud dynasty.

Similar sentiments have also been expressed on their plans to demolish the Green Dome and other mosques adjacent the holy mosque. Last month The All India Ulema and Mashaikh Board registered a strong protest against the planned demolitions on the false pretext of expansion. The general secretary of the Board Syed Babar Ashraf wrote a letter to the Saudi embassy in India requesting the Saudi government to stop further demolition and destruction of holy places and Islamic cultural heritage in Saudi Arabia. But Mr Ashraf said he did not receive any reply from the Saudi officials. The most painful aspect of all this is that there is no transparency on the part of the Saudi government about the plans of demolition or modification. Their plans involving the holy mosque is not a matter of their own government rather they are associated with the religious sentiments and aspirations of the entire Muslim ummah and any decision on it must be taken by taking the whole Muslim community into confidence. They cannot take any decision about Masjid-e-Nabawi secretly. And if it is done, it will have a disastrous effect on the Muslim community and might signal the doom of the dynasty. It has committed a grave sin by constructing a public toilet over the house of Hadhrat Khadija (R.A.), the first and the dearest wife of the holy Prophet (PBUH).

Another important organisation of Indian Muslims, All India Muslim Personal Law Board (AIMPLB) has also condemned and protested the demolition and expansion plans of the Saudi government in Masjid Nabawi.  Their press release says that Muslims all over the world are extremely disturbed, dismayed and frustrated to witness destruction of Islamic Heritage in Saudi Arabia to construct hotels, public toilets, commercial buildings, etc. The AIMPLB has organized protest meetings all over India demanding that the plans to demolish the Green Dome and other mosques in Madina should be cancelled and all the sacred buildings that have so far been destroyed should be restored. They have put the following demands:

(2) Saudi Government should immediately restore Heritage memorials of Baqi in Madinah and Mu'allah in Makka without wasting any more time.

(2) The Public Toilet made on the House of Prophet Mohammad (saws) in Makka should be destroyed and sanctity of the place is restored with immediate effect.

(3) Saudi Government should publicly apologize to the Muslim world for the destruction of these Islamic Heritage and insults meted out to Prophet Mohammad (sallallahu alaihi wa sallam, his family members and Sahabah, in the hands of their Government, particularly in Baqi and Muallla, in early 20th Century. The ugly wrongs committed in the past should be apologized publicly and a new beginning made by restoring the sanctuaries, and other Heritage buildings. Saudi Government should initiate a master plan to restore the Islamic Heritage buildings that have been destroyed in Arabia with immediate effect.

It speaks of the hypocrisy of the Saud dynasty that on the one hand they have been demolishing the houses of holy companions, constructing public toilet on the house of Hadhrat Khadija, constructing markets and libraries on other holy sites of Makkah and Madina in the name of preventing Muslims from shirk but on the other hand they have taken up restoration work of the ancestral home of the Saud family at Dariyah, the first capital of the Saud Kingdom. Have the Sauds built public toilet over the grave of their grandfather Saud?

It seems that the houses of holy companions, ummul mumineen and the Masjid Nabawi have no importance vis a vis the ancestral house of the Sauds. Their hypocrisy is also evident from the fact when the Sufi cemetery was razed by Syrian Salafis to make way for the University of Damascus and its campus in that city, King Abd al-Aziz Ibn Sa`ud of Saudi Arabia intervened personally, on the advise of Wahhabi clergy, to preserve intact the graves and tombs of Ibn Taymiyya and his student Ibn Kathir.

Therefore, it is not entirely ideological basis that all these domolitions have been made on. If it were so, they had not been demolished selectively. There might be some conspiracy to wipe out all the signs and relics of Islam on the pretext of preserving the true spirit of Islam.

The proposed expansion to the west, includes mosques dedicated to Sayyedna Abu Bakr (ru) and Sayyedna Umar (ru) , as well as the Masjid Ghamama, built to mark the spot where the Prophet (sallallahu alaihi wa sallam) conducted his first prayer for the Eid festival. The Saudis have announced no plans to preserve these mosques.

Dr. Irfan al-Alawi of the Islamic Heritage Research Foundation, UK fears that the expansion of the Masjid-e-Nabawi (saws) is part of a wider drive to shift focus away from the pious grave of Prophet Mohammad (saws), where Muslims offer Salaat and Salam to the Prophet (saws). The Green Dome is the centre piece of the current mosque.

It will be wise on the part of the Saudi government to heed to the requests of the Muslims across the world and respect their religious feelings, otherwise demolition of the Green Dome may spell doom for their dynasty.