As The Hajj Begins, the Destruction of Mecca's Heritage Continues

Two million Muslims have flooded into Saudi Arabia's Mina Valley from Mecca for the start of the Hajj pilgrimage this week. Dressed in simple white garments and freed from their worldly possessions, they are following in the footsteps of the prophet Muhammad. But in Islam's holiest city, there is increasingly little sign of the prophet's legacy – or the frugal life he espoused. 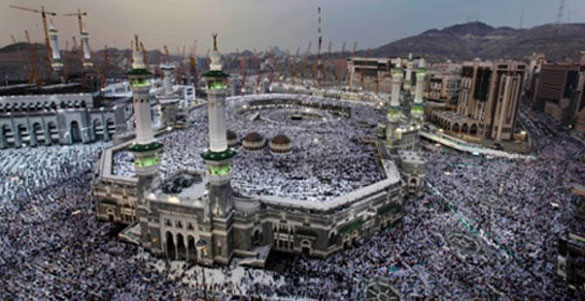 The Grand Mosque in Mecca, teeming with pilgrims for the start of Hajj this week. Photograph: Amr Nabil/AP

“The authorities are trying to destroy anything in Mecca that is associated with the prophet's life,” says Irfan al-Alawi, director of the UK-based Islamic Heritage Research Foundation, who recently returned from a trip to the city. “They have already bulldozed the house of his wife, his grandson and his companion – and now they are coming for his birthplace. And for what? Yet more seven-star hotels.”

At the foot of the Khandama Mountain to the west of the Grand Mosque, an innocuous white building stands alone, cast adrift in a sea of paving and tarmac. This small library was built to mark the site of the house where the prophet was born, known as the House of Mawlid, the remains of which Alawi says still lie beneath its raised plinth. But it is now in the path of bigger plans. 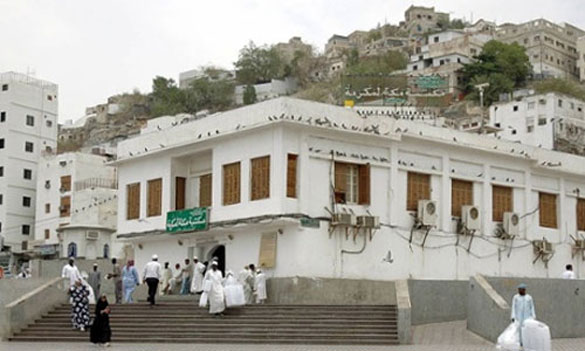 Under threat … The library built to mark the site of the prophet's birthplace. Photograph: Irfan al-Alawi

Across the road, the house of Muhammad's wife, Khadijah, has already been replaced with a block of 1,400 public lavatories. Further up the hill, centuries-old neighbourhoods have been flattened to continue the marching line of steroidal hotel towers. Its neighbours already swept away, the library is next in the firing line, standing in the way of plans for an underground car park and a metro line extension – needed to cope with the huge influx of visitors, set to reach 17 million a year by 2025.

As if to preempt any outcry, the building now bears a sign in five languages declaring: “There is no proof that Prophet Muhammad was born in this place, so it is forbidden to make this place specific for praying, supplicating or get blessing.” A booth manned by the religious police ensures that no visitors step out of line.

It is, says Alawi, just the latest move in a series of state-endorsed acts of cultural vandalism, urged on by the hard line wahabist sect, which perceives historic sites and the veneration of the prophet as encouraging sinful idolatry. A 1,400-year-old well, Bir e Tuwa, where the prophet spent a night, now stands alone as another endangered fragment marooned in a rubble wasteland. Its neighbours have been razed for hotels, and it looks to be going the same way.

In the Grand Mosque itself, a group of 500-year-old stone columns and vaults have now been demolished to make room for a vast extension. It is no coincidence, says Alawi, that the columns in the firing sights were inscribed with calligraphic poetry recounting Muhammad's journeys and associated sites of pilgrimage. 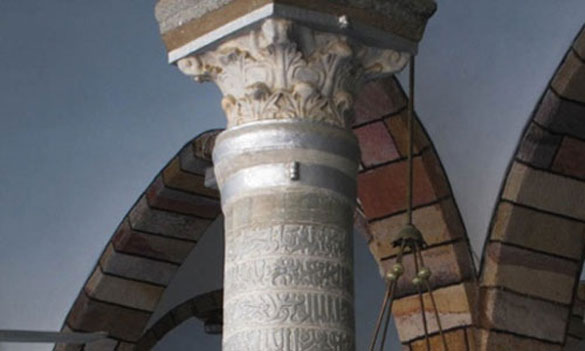 Encircled by a looming ring of hotels and topped by Big Ben's big brother clock-tower of the Abraj al-Bait complex, the Grand Mosque has been transformed beyond all recognition over the last decade. As reported last year, the view from the open courtyard in the centre of the mosque is now choked with cranes, jostling for position with minarets and towers; but this year there is a new addition just metres from the Kaaba itself. The holy black cube, around which pilgrims must walk, has now been blessed with an elevated roundabout.

Raised 13m in the air, rising just above the top of the Kaaba, this floating halo provides an extra 3,000 square metres of space for perambulating pilgrims. With priority given to the elderly and disabled, its 12m-wide walkway is big enough to accommodate 1,700 wheelchairs per hour – but it comes at the cost of throttling the Kaaba in a three-storey cage and blocking the sacred black box from the view of thousands of others on the elevated prayer halls around. 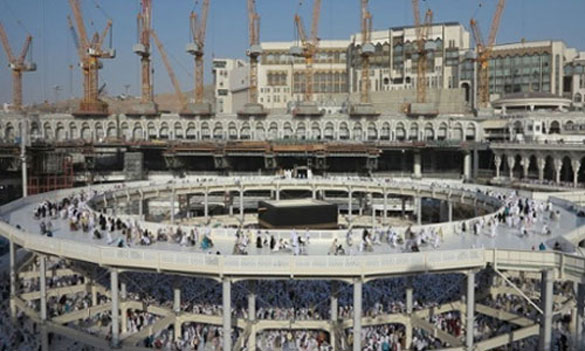 Authorities say it is only a temporary measure for the next three years, while the £13 bn mosque expansion project is underway, leaving a substantial area out of action. Parts of the ground and first floor of this huge complex are open for the first time this year, welcoming pilgrims into its lofty halls, linked by escalators to 10,000 ablution places. When complete, this gargantuan triangular slab, which sprawls out to the north like a slice of marble-encrusted wedding cake, will more than double the capacity of the mosque to 1.2 million worshippers, with 52 entrance gates, 120 elevators and four new minarets. And the price of this extra space? The wholesale demolition of one of Mecca's most historic neighbourhoods – and the forced eviction of its residents.

Earlier this month, senior Saudi cleric Sheikh Saad bins Nasser Al Shathri called on Muslims around the world to support the expansion project. “Co-operating with the expansion of the Grand Mosque is consistent with Sharia principles,” he said, “because building mosques is regarded as one of the greatest acts of piety and the best of all mosques is the Grand Mosque.” 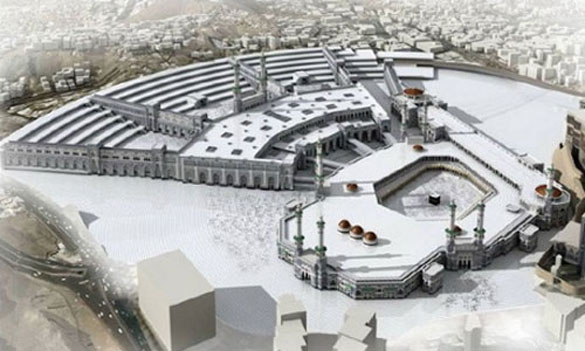 With the entire city choked by building work, the kingdom has taken the unusual step of urging pilgrims to delay their visit, and numbers are down 20% this year as a result of reduced visa quotas. “If Muslims choose not to travel to the Grand Mosque with the benefit of other Muslims in mind,” said Shathri, “they will be rewarded in the same way as if they had performed the pilgrimage.”