Pakistani Military Wants a Civilian Façade in the Form Of an ‘Elected’ Govt That Follows It’s Diktats on India, Afghanistan, Jihadi Terrorism, China and US 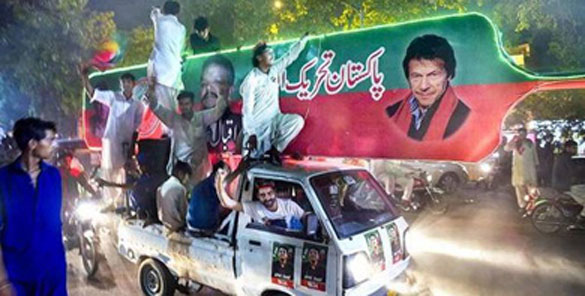 The result of Pakistan’s 25 July election was foretold. The pre-polling environment had been muddied by the blatant meddling of the country’s all-powerful military, assisted by a judiciary eager to please the generals. The results – a disputed victory for cricketer-turned-politician Imran Khan and his Pakistan Tehrik-e-Insaaf (PTI) party– won’t make a dent in Pakistan’s reputation as a ‘crisis state.’

The establishment has wanted to root out the two previously dominant political parties, the Pakistan Muslim League-Nawaz (PML-N) and the Pakistan Peoples Party (PPP) for some time now. This time, it ignored international criticism of the one-sidedness of the election process and believes it has completed the job.

More than 24 hours after the end of polling, results have still not been fully declared. Polling agents were not provided signed returns and were even turned out of polling stations in some places.

The Election Commission brazenly claimed technical glitches without explaining why they delayed results even more than in the older era of fewer technical means.

Some of the 371,388 troops ostensibly on security duty did not care if they were photographed violating the sanctity of secret ballot or telling the polling staff what to do.

The army chief, General Qamar Bajwa, explained the military’s interest in the outcome of the election. “We are the target of inimical forces working against Pakistan,” he declared, adding, “We’ve come a long way in our comprehensive national effort to fail them.” The people of Pakistan were expected to show that they were ‘united and steadfast’ by voting and defeating the ‘inimical forces.’

The soldiers’ worldview begins and ends with ‘inimical forces’ working against Pakistan. They have convinced themselves over the years that poor leadership and corrupt civilians play in the hands of Pakistan’s enemies and need to be marginalised.

The Pakistani military obviously wants a civilian façade in the form of an ‘elected’ government that follows the military’s dictates on issues such as policy towards India, Afghanistan, Jihadi terrorism, and relations with China and the US. It does not want a genuinely popular civilian politician in power, backed by an electoral mandate, and certainly not one that might alter the country’s overall direction.

To be fair, Pakistani politicians do reveal their incompetence and corruption periodically, and there are many Pakistanis that share the simplistic view that bad politicians are the only thing that inhibits Pakistan’s greatness. Imran Khan, the cricket hero untainted by experience or political office, has galvanised the support of those who think that way.

But the generals — and now their ‘elected’ proteges — need to understand that the country’s low literacy, low exports, and high infant mortality are not the result of actions of Pakistan’s enemies or even the consequence of politicians’ corruption. Some of Pakistan’s domestic policy failures are the product of the military’s national security policies.

Pakistan’s problems have deep roots and addressing them requires a fundamental shift away from the narrative that has brought the country to its current state. That would need more than one election cycle to resolve but as Pakistani elections go, this one has set the stage for a more difficult road than normal.

No one can govern effectively when half the country believes they have been installed because of manipulation by the military and judiciary, and not by the vote of the people.

Even if it was not disputed, the result of the latest election would help change Pakistan’s fundamental direction only if Pakistan’s establishment decides to shut down its Jihad business and recognise Jihad-oriented nationalism as the source of Pakistan’s isolation and economic difficulties.

It is unlikely that PM Imran Khan will act decisively against Jihadis, given his sympathy for their cause, but miracles can happen. As for economic issues, Khan has offered platitudes in lieu of actual policy suggestions.

We have no idea how he would deal with the looming financial crisis, as Pakistan’s debt payments fall due, or the continued pressure from the UN’s Financial Action Task Force (FATF) to shut down finances of terrorist groups.

Not only will Pakistan’s reputation as a crisis-prone country not end with this election, the circumstances before the election and the disputed result, both, will contribute to a deeper crisis of legitimacy.

Imran Khan will need coalition partners to form a government and would eventually need to reach out to his opposition. But he is a combative, polarising figure who would need to change his personality to learn the art of compromise.

In helping Imran Khan fulfil his dream of becoming prime minister, the military-intelligence establishment’s objectives and script are like the one in 1990 when Nawaz Sharif was the chosen one.

Then, the generals believed that a pro-business conservative would help Pakistan’s international negotiating position in the aftermath of the Pressler amendment, which suspended US aid to Pakistan over its nuclear programme.

At that time, Sharif espoused an ultranationalist, anti-India narrative and supported the military’s Jihad in Afghanistan and Kashmir. But Sharif’s economic ambitions led him to recognise that the military’s policies were untenable, leading to a breach in his relations with the establishment.

Of course, the Jihad in Kashmir did not lead to the quick results Pakistan’s military and Inter-Services Intelligence (ISI) had expected nor did events in Afghanistan unfold according to their desires. But instead of recognising the overreach of their ambitions, the generals blamed the civilians for their failures.

Imran Khan is not Nawaz Sharif. He is 65-years-old and might opt for not challenging the short-sighted generals even after (or rather, if) he recognises the futility of their obsessions. He could be content with being Prime Minister and manage some aspects of government, without confronting the generals over altering the country’s course.

But if he decides to do what Pakistan really needs –a shift away from Jihad and militarism, peace and normal relations with neighbours, investment in human capital to pave the way for economic growth – then we will see a rerun of the civil-military shadow plays we have all seen before.

Husain Haqqani, director for South and Central Asia at the Hudson Institute in Washington D.C., was Pakistan’s ambassador to the United States from 2008-11. His latest book is ‘Reimagining Pakistan.