ON Good Friday we meditate on the innocent suffering and death of Christ on the cross and its meaning. Christians all over the world do this as they trust in a God who gave his only begotten son for the redemption of man from the curse and bondage of sin. “Surely he took up our infirmities and carried our sorrows, yet we considered him stricken by God, smitten by him and afflicted. But he was pierced for our transgressions, he was crushed for our inequities; the punishment that brought us peace was upon him, and by his wounds we are healed. We all, like sheep, have gone astray, each of us has turned his own way; and the Lord has laid on him the iniquity of us all.” This quote is from the book of the Old Testament Prophet Isaiah Chapter 52:4-6 prophesying the vicarious sufferings and death of Christ for salvation of mankind. 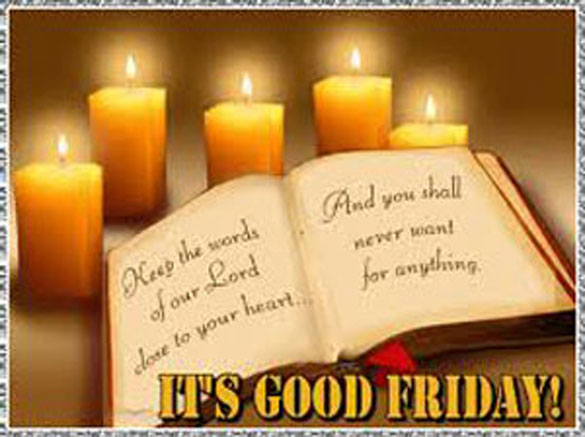 The prophet described the sufferings that Christ was to suffer for the satisfaction of the debt of sin of mankind. It is important to note that in this short scriptures the first person plural is used as many as ten times. Hundreds of years later, apostle Paul said: “God made him who had no sin to be sin for us, so that in him we might become the righteous of God.” (2 Corinthians 5:21). The word “infirmities” here implies sin, primarily. Due to sin mankind became infirm and depraved. He could not save himself. But God being just and holy there cannot be impunity for man, as sinful he is. Sin is serious. So it must be dealt with seriously. This is dealt with by God in his love in the suffering of his sinless son. The price for our peace and reconciliation with God is paid in the death of Christ. Christianity is vital personal relationship with God in and through Christ.

The heart of the matter is that Christ died for us, for our sins and for our salvation from sin. He did not just die. The fact that Christ died for our sins makes his death itself the Gospel, the Good News. His death was not a Docetic death. He really died. The Apostles’ Creed says about Christ: “He was crucified, died and buried.  He descended to the dead.” All these confirm that he died indeed. Christ became “the Lamb of God” for the propitiation of our sins. The Old Testament event of God miraculously providing the lamb to take the place of Abraham’s son for the sacrifice as narrated in the book of Genesis 22 comes to mind. God provided Christ as the divinely ordained Lamb to be sacrificed as the ransom for our redemption.

We believe in a suffering God. God suffers when people suffer. Our God does not hide when we suffer. Every sin that man commits against other people is, first of all, sin against God. This truth reflects on the essential heavenly love of God for all people, all his creation without any distinction. It is God himself who suffered on the cross of Calvary where Christ was crucified. Christ is called the sympathetic, compassionate High Priest — he suffers along with suffering humanity. The cross of Christ simply demonstrates the divine truth that our loving God shares our sorrows and afflictions. When we sin against someone, we hurt God. And a true believer in God cannot but repent of his sin and wrongdoings and turn to God. That is how reconciliation can take place.

The world needs reconciliation and healing of relationships. For this to happen justice must be in place. Justice can take place if people confess their sins, not only to God but also to the people sinned against. The problem of our world is that people sin, but do not admit it. As a result of this relationships break down. People continue to suffer. This is a hydra-headed malaise. There is this saying about the medical profession: “Only the wounded physician can heal.” The first adjective that the Holy Bible has about God is that he is our healer. He heals us because he has suffered with us humans all our infirmities, physical, mental, spiritual.

This way of God in dealing with the sin issue is not comprehended in human wisdom or reason. God’s way, his plan is different from ours. He is God, we are Man. God made his Son, called the Suffering Servant, suffer for sinners not to glorify sufferings, but to show that he is just, he is love and he identifies with us in our existential experiences that we may come back to him in faith and trust and be reconciled to him. But the innocent sufferings of Christ points to his vindication, the sequential event of his glorious resurrection from the dead on which depends the meaning of the Christian’s faith. All praises be to our God!