Own Code of Ethics: Ravanayana

Dussehra is all about celebrating the victory of Dharma over Adharma. It is on this day that the evil demon Ravana was slain by Sri Rama, the avatar of Lord Vishnu. Rama is considered as the epitome of virtue — the Maryada Purushottama, whereas Ravana is often portrayed as the devil incarnate. 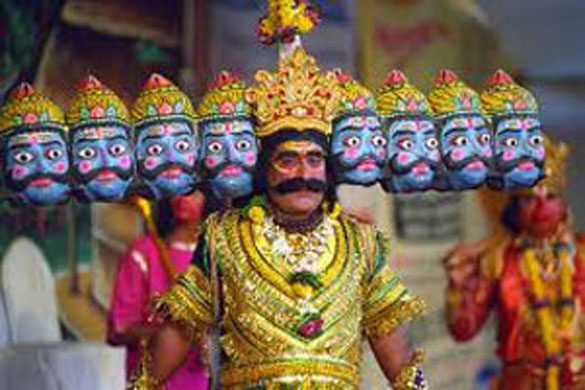 Ravana’s death is the most celebrated death in the history of mankind. Year after year, Ravana keeps dying spectacularly in every nook and corner of India during Dussehra.

Sri Rama represents an idea of how to lead a life. Most saints have called it an ideal way of living and most Indians do believe it to be so. The unapologetic spiritual quest of Indian philosophy, which sees everything materialistic with derision, has not always gone unchallenged. In Ramayana itself we can find thinkers who have put materialistic pleasures over abstract ideals.

Valmiki Ramayana speaks about a materialistic philosopher Jabali, who tried to stop Lord Rama from going to his fourteen years of exile, with his rational arguments. Jabali was a pioneer in the philosophy of “Lokayata Darshana”, which gave importance to man’s materialistic pursuit over vague concepts of spiritualism. Different Ramayanas give varying versions of how Rama had reacted to these arguments. But most agree that Lord Rama lost his cool and a terrified Jabali meekly withdrew fearing for his life.

Ravana lived his life according to the tenets of Jabali. Though a devout Shiva Bhakta, he never tried to imitate the ascetic lifestyle of his favourite God. He grabbed life with his twenty arms and drank the nectar of pleasure with his ten mouths. Ravana was someone who lived life fully. Unlike Sri Rama, he had no reverence for his parents. Though a Brahmin, he did not offer any special privileges for Brahmins in his kingdom.

He was considered the greatest Vedic scholar of his times, yet his followers were always disrupting yajnas and it fell upon Sri Rama to protect such religious sacrifices. While Rama was willing to forgo his kingship for the sake of his half-brother Bharata, Ravana grabbed Lanka from his half-brother Kubera through deceit and cunning.

It will be interesting to ask this simple question. Had Ravana won the final war instead of Rama, would our concept of right and wrong have undergone any change?

Maybe, the poets would have told us that Ravana followed the Dharma to the last word. History is always written by the victors. His abduction of Sita might have been justified as a revenge for mutilation of his sister by Lakshmana. When Rama could not accept his wife without a test of purity by fire, Ravana had stood by his wife in a much more serious circumstance.

Valmiki Ramayana speaks about an incident when Angada and other Vanaras entered Ravana’s harem and molested Mandodari. This was done as a war strategy to prevent Ravana from completing his prayer that might have made him invincible. However, Ravana accepted his wife even after the incident and was not worried about what the world would think about her. There was no Agnipariksha for Mandodari.

This may earn him lots of fans from the modern day feminists, but a deeper reading of the epic will make them understand that while Ravana could charm any number of ladies to his bed, he was not above using force whenever he felt necessary.

Own Code of Ethics

He lived by his own code of ethics. Unlike his foe who is Dharma incarnate, Ravana is a mixture of good and the bad, the magnificent and the mundane. He is great and mean at the same time. Even if he had won the decisive battle with Rama, he would have never become a God like what Rama became in later years. Ravana had his flaws that made him too humane to be a God.

Lord Rama suffered an exile of fourteen long years, his wife was abducted by a powerful man and he had to struggle hard to reclaim her. He was forced to kill Bali against his conscience. After his victory, he had to order his wife for a test of purity just to satisfy the society. Even after regaining his kingdom and ruling exemplarily, happiness eluded him. He was forced to abandon his beloved wife fearing slander and his sons were born away from him. When he was reunited with his family, it was not the happiness of a reunion that awaited him. It was the grief of losing his wife forever when he ordered her a second Agnipariksha.

Rama’s uncompromising sense of Dharma also claimed the life of his faithful brother, Lakshmana. Yama had extracted a promise from Rama that whoever disturbs their meeting shall be put to death. Durvasa, the short-tempered ascetic, needed an audience with Rama at the same time and threatened to curse the entire country if he was made to wait. Rendered helpless, Lakshmana disturbed the fateful meeting. Rama, to keep his promise, had to order the death of Lakhshmana. Rama’s end also was quite undeserving for a great warrior like him.

The Jabalists may argue that, in contrast, the materialistic Ravana lived his life in his own terms, ruled a huge empire, wallowed in luxury, stood by his wife when required and died a warrior’s death in his old age. The arguments the conventional society will offer them, like Rama’s life shows how one has to be steadfast in one’s Dharma irrespective of the consequences, will only invite their derision. Justifications such as a better afterlife or the attainment of Moksha also will not have any meaning for Jabalists as they do not believe in the unknown. They will just point out the contrasting life and death of the Dharmic Rama as against that of the materialistic Ravana for supporting their argument.

The Jabalists may even say that, people may be worshipping Sri Rama as God, but they follow Ravana in practice. The mad rush towards the materialistic pleasure that marks the modern lifestyle shows that people have embraced Ravana’s life philosophy of enjoying life at any cost rather than the self- sacrificing Dharma of Rama.

Like so many Dussehras of past three thousand years or more, Ravana will get burst into a million pieces in every street of India this Dussehra too. The Asura king will be roaring with laughter at the irony of it, for he knows that despite the deification of his foe, it is his life philosophy that has finally won out among the people.

In ultimate reckoning, the great materialist philosopher has the last laugh, for he has achieved what the great avatars, prophets, saints, Mahatmas, Bodhisattvas and sons of God have collectively failed to achieve despite all their preachings, holy books, efforts and sacrifices since the dawn of civilisation. Going up in flames a million times over and over is a small price to pay for the universal practice, if not acceptance, of one’s life philosophy.