Chennai, June 1: A recent letter written to the Chief Minister of Tamil Nadu, J Jayalalithaa and also the state’s police chief has warned about the infiltration of Wahabis and Deobandis into the managing committees of Chennai based Dargahs and Mosques.

The brief of the letter written by the Ahlus Sunnath Wal Jamaths Federation is that Wahabism and its preachers are attempting to threaten Hindu-Muslim unity in Chennai.

June 1: A recent letter written to the Chief Minister of Tamil Nadu, J Jayalalithaa and also the state's police chief has warned about the infiltration of Wahabis and Deobandis into the managing committees of Chennai based Dargahs and Mosques. The brief of the letter written by the Ahlus Sunnath Wal Jamaths Federation is that Wahabism and its preachers are attempting to threaten Hindu-Muslim unity in Chennai.

Wahabis have infiltrated Chennai mosques The ISIS which adopts to the Wahabi style is no stranger to Tamil Nadu. Incidents of youth posing with ISIS t-shirts were reported from this state. Moreover, the first alleged ISIS recruit from India, Haja Fakkruddin was also from Tamil Nadu. The state has been a peaceful one where religious fundamentalism is concerned, but the letter indicates that this is a threat that should not be ignored.

Infiltrating the Mosques in Chennai the Wahhabis follow the same pattern in every place they attempt to infiltrate. They infiltrate into the managing committees of the Mosques and similar incidents have been reported in Karnataka, Maharashtra, Jammu and Kashmir and Kerala Once they make their way into the committees they promote their ideology which incidentally is followed by 34 terrorist groups across the world, the ISIS and the al-Qaeda being the main ones. In the letter it is stated that the Madrasas and Masjids which have been constructed by followers of saints is under immense threat from Wahhabis.

If they continue this way then peace between the Hindus and Muslims will be under threat, the letter also notes. The Chennai police say that they are seriously looking into this letter. An intelligence bureau official posted at Chennai says that there have been attempts by Wahhabis not just in Tamil Nadu but in other parts of the country as well. They attempt to change the thinking of the youth and tell them to be more radical in their approach. The land of Wahhabis, Saudi Arabia pumps in a lot of money to send these preachers across the globe. The easiest way for them to go about their business is to be part of the managing committee in Mosques. They either take over by force or by sheer money power. They have not been very successful in a lot of places as the moderates have retaliated hard. However, they will continue to try and the police need to be on guard. Moreover, the Mosque and Madrasa authorities must report such cases to the police immediately, the officer further informed. OneIndia News 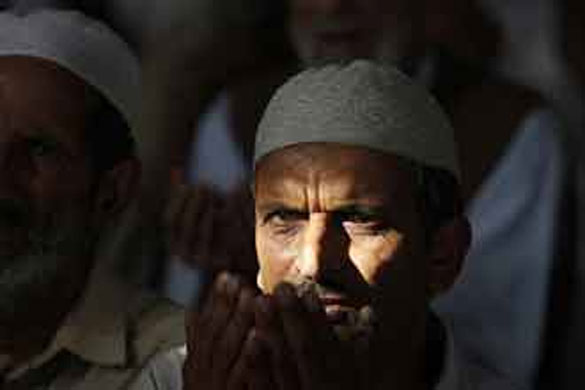 The Intelligence Bureau has sounded alarm bells in a secret report about the growth of radical Wahhabi ideology in India. Vicky Nanjappa/Rediff.com reports.

First up, two aspects you should know about the Wahhabis, the strictly orthodox Sunni Muslim sect, in India.

1. The current number of Wahhabi followers in India today stands at 18 lakh (1.8 million).

2. The sect has generated approximately Rs 1,700 crore (Rs 17 billion) in the past three years through funds pumped in from Saudi Arabia.

According to the Wahhabi rule book, many thousands of which are in circulation in India, its followers have to strictly adhere to the following:

•Men have to compulsorily grow beards.

•Shrines shall be forbidden.

•Every Muslim woman should wear purdah or be subject to severe punishment.

•All men should wear trousers which are above their ankles.

•Women should not be allowed to work. Exception can be made only if the family is in need.

•Men and women should not mingle together in public.

•No laughing loudly or listening to music; no dancing or watching television.

•No weeping loudly at funerals.

•Abide by the Shariat law; every offence committed shall be punishable under this law.

The Intelligence Bureau, India's domestic intelligence agency which has been tracking the rise of Wahhabism in the country, presents a grim picture in its report.

The huge inflow of funds from Saudi Arabia is being utilised to nurture the Wahabbi sect.

An IB source told this correspondent, "We keep alerting the police and other agencies about it (the easy flow of funds); more needs to be done. We had issued a warning ahead of Eid, as this is the period when the donations peak," the IB agent added.

The radical Jamiat Ahl-e-Hadith, which first set up base in Kashmir, is spearheading Wahabbi operations across India. Having persuaded around 400 mosques in Kashmir to follow its ideology, the Wahabbis have now targetted Maharashtra and Kerala.

Although the Maharashtra government is in denial about the rise of Wahhabism in the state, Wahhabis control over 40 mosques in Maharashtra.

Wahabbis have taken over at least 75 mosques in Kerala, the IB report says.

Signs of a Wahhabi presence have also been reported from Hyderabad, Uttar Pradesh, Bihar and Karnataka.