If it were possible for Islam to sue anyone for defamation and constant assaults on its image, many of its so-called followers would perpetually find themselves in the dock. All the combined efforts of the enemies of the faith may not have visited as much damage on its pristine image as caused by its own misguided, overzealous followers. 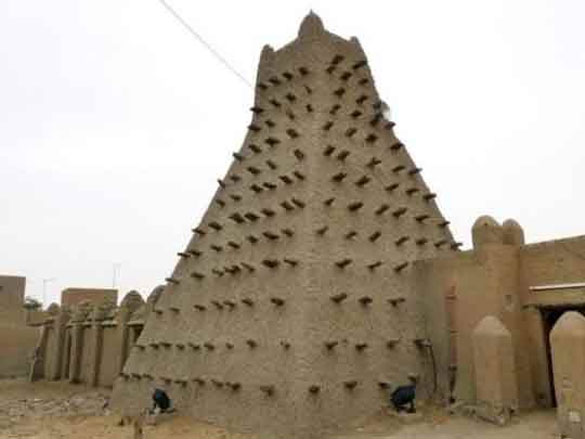 As if we didn’t have enough of the madness and havoc wreaked by Al-Qaeda and assorted fellow travelers in the name of Islam over the past decade and half, we now have to contend with the lunatics of Mali’s Ansar Dine, the so-called defenders of faith, and Nigeria’s Boko Haram. Ansar Dine, a group comprising Tuareg rebels and Al-Qaeda extremists, has outraged everyone including Muslims everywhere by destroying several centuries-old shrines, including a 15th century mosque in Timbuktu.

The vandalism has provoked scathing denunciation by UNESCO and the Organization of Islamic Cooperation with the latter describing the mosques and Sufi mausoleums as part of “Islamic heritage.” The International Criminal Court has rightly described the wanton destruction of the monuments — on UNESCO’s list of world heritage sites — as “war crimes” and has threatened legal action.

Sometimes called the City of 333 Saints, Timbuktu is or was home to a large number of mausoleums and mosques, celebrated for their unique style of architecture. Once known as Cairo’s African daughter, the city was the cradle of Islamic learning and civilization in Africa during the golden age of Islam.

For centuries Timbuktu has proudly stood at the crossroads of Africa, Europe and the Arab world as a symbol of Muslim quest for excellence and putting the lie to colonial fiction that history and progress in the continent began only with the arrival of Europeans. For more than a thousand years, it had been a trading hub and the place where the camel met the canoe, as the old legend would put it. Goods from the Mediterranean coast and salt from the north were traded for gold from the south. The ancient city’s libraries are home to thousands of rare Islamic manuscripts and books.

All that is now under assault by people who call themselves Muslims. Since Saturday some seven ancient monuments have been demolished by the men wielding pickaxes and shovels, literally pulverizing a rich legacy. The destruction began with the attack on Timbuktu’s independence monument. The militants have vowed to destroy all 16 of the city’s major shrines, including three ancient mosques — one of them dating back to 1327.

The brigands are now in control of the northern Mali, including its fabled city of Timbuktu. A spokesman for Ansar Dine justified the action saying the group was acting “in the name of God” and would destroy every mausoleum in the city. “God is unique. All of this (visiting shrines) is haram (forbidden),” insisted the spokesman, Sanda Ould Boumama, reminding one chillingly of the destruction of the Buddha statues in Afghanistan.

The 6th century twin Buddha statues, standing at an altitude of 2,500 meters (8,202 ft) were razed to the ground by the Taliban in 2001 defying appeals by a horrified world, months before the regime itself came tumbling down in the wake of 9/11.

Doubtless, the student militia had done some good things for Afghanistan, including putting an end to the internecine bloodletting, restoring law and order and cracking down on the curse of opium. Today, however, the Taleban are only remembered for the Bamiyan, their absurd curbs on women’s education and of course for hosting a certain Sheikh. That’s how it is. No one remembers your good deeds; only bad ones.

So we have been here before. Of course, there’s no argument with the fact that Islam strongly believes in and preaches the unity of God and frowns on all iconography and idolatry practices. Since many of these mausoleums, especially in South Asia, have ended up becoming places of worship with visitors praying and prostrating before the grave and seeking the particular saint’s intercession with God, visits to shines are looked down upon by many.

Islam is a very simple and democratic faith, if you will. It brooks no go-betweens and their intercession. This is why we don’t have a clergy. No one comes between the man and his Creator.

This is apparently why Al-Qaeda and its affiliates have targeted the popular Sufi shrines in Pakistan, including that of Lahore’s legendary Data Gang Bakhsh, in the past and this is why the brigands seem to be going after the prized monuments in Timbuktu.

But this can only explain, not justify in anyway the outrage in Mali.

No one has a license to go about destroying mausoleums and graves of pious men who spent their life time in propagating Islam’s liberating message of unity of God and oneness of humanity. The destruction of graves is the ultimate desecration of the dead and our faith urges us to respect the dead. Even worst criminals and enemies of the religion were accorded this respect. Would it sanction such appalling crimes against holy men who spent all their lives serving humanity?

But this isn’t really about the shrines and their desecration by a lunatic fringe. The issue here really is about a very tiny, extremist minority — it can’t be even called a minority; it’s more like a small, deadly cult — trying to hijack the glorious message of a great faith that came as a blessing for the whole world. The Quran repeatedly describes the Prophet as a blessing for the mankind, not just for the Arabs or Muslims. He forgave his worst enemies, including those who tried to kill him, following the fall of Makkah.

Would the Prophet, peace be upon him, be pleased with Boko Haram’s targeting of Christians in Nigeria? During the past year or so, hundreds of innocents have been killed in the Boko Haram attacks, all in the name of jihad. Would the Last Messenger approve of the continuing attacks in Pakistan that do not spare even those quietly praying to their God in mosques? With defenders of faith like these, does Islam need any enemies?

This is not the first time these questions have been raised by Muslim and non-Muslim commentators. Over the years, Muslim countries have taken several measures to rein in the extremists but nothing seems to work. Groups like Al-Qaeda, born out of impotent Muslim anger and frustration against the West, have mushroomed all over the world largely because those policies remain unchanged. Although Al-Qaeda itself has been considerably weakened, its terror franchise and brand value is far from diluted.

What is clearly needed is a more proactive approach to take on this unprecedented challenge to Islam. The Islamic history is full of peaks and valleys and great crises and struggles. But it has never faced such a challenge from within, from people who pretend to be from amongst us and wreak havoc in the name of our faith.

Muslim scholars, intellectuals and nations must come together to confront the scourge of extremism. For this ideological onslaught is deadlier and more catastrophic than the offensive the Islamic world once faced from the Mongol armies or from Western forces in more recent times. It’s time to stand and fight. And all of us, wherever or whoever we are, must speak up against these attempts to hijack our faith and its message. If we do not speak, the terrorists will.