Muslims Should Always Keep Weapons with Them According To Sunnah, prepare your children for Jihad: Maulana Habib Ur Rehman Sani Ludhianvi

‘The Ulema have put the importance of jihad in the present day behind them. The Ulema of Deoband have become cowards. Muslims should always keep weapons with them according to the Sunnah. They should keep a sword or a dagger even at the time of Namaz’. These views were expressed by the national president of Majlis-e-Ahrar Maulana Habib ur Rehman Sani Ludhianvi here today. He was addressing a big audience at the Tahaffuz-e-Khatam-e-Nabuwwat Conference (Conference on the protection of finality of prophethood) at Eidgah Maidan here. He said to the audience, “Prepare your children to fight the enemies of Islam”. Attacking Sufism, the Maulana said, “Becoming Sufi will not do you any good. Sufism does not pose any threat to the British. If there is any threat to them it is from people like us.” 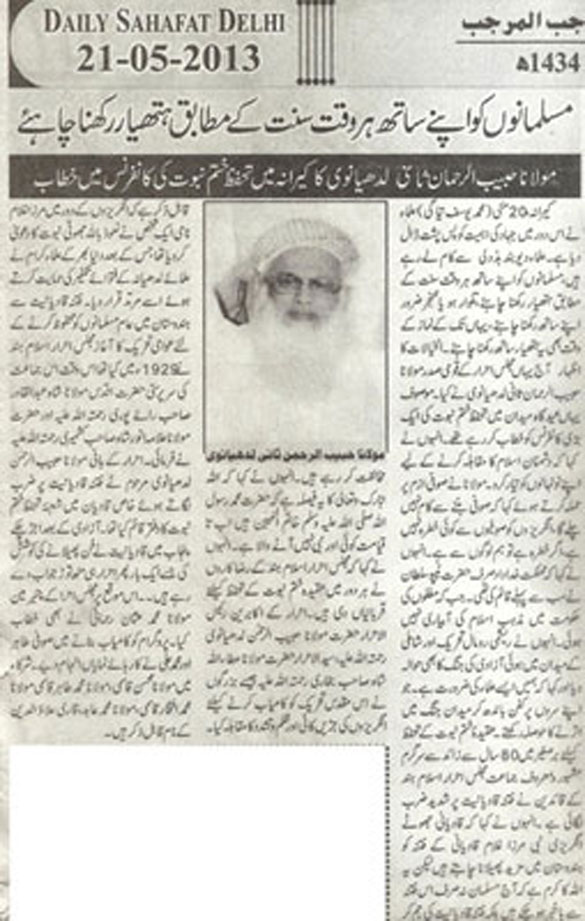 He said that it is the decision of God that Prophet Muhammad (pbuh) is the final prophet and no prophet will come after him till the Day of Judgment. He said that the activists of Majlis-e-Ahrar-e-Islam have rendered sacrifices for the protection of the finality of Prophethood in every age. The great leaders of Ahrar, Maulana Habib ur Rehman Ludhianvi, Ataullah Shah Bukhari and others struck at the roots of the British and made this sacred movement a success and faced violence and persecution.

It should be recalled that a man called Mirza Ghulam Ahmad Qadiani had claimed false prophethood (perish the thought). Subsequently, the Ulema from all over the world supported the fatwa of Kufr issued by Maulana Habib ur Rehman against him and declared him apostate. To protect Muslims in India from the mischief of Qadianism, the Majlis-e-Ahrar had launched a public movement in 1929. During that time, Maulana Shah Abdul Quadir Raipuri and Maulana Anwar Shah Kashmiri patronised this group. Wielding a severe blow to the mischief of Qadianism, the founder of the organisation, Ahrar, Maulana Habib ur Rehman Ludhianvi had opened its office of the department of ‘Tahaffuz-e-Khatam-e-Nabuwwat’ (protection of finality of prophethood) in Qadian. After the independence, Qadianism again tried to spread its tentacles in Punjab but the Ahrars have been giving them a tough fight once again.

Related article: Prepare Muslim Youth to Behead Ahmadis through Suicide Bombing, Demand Radical Mullahs in Punjab: Preventing Radicalisation of Muslim Youth in India No Less Challenging Than It Is In Pakistan