In 2010, many liberal and secular Muslims in the U.S. and Canada joined hands to fight the so-called Ground-Zero Mosque in New York City, which we felt was equivalent to showing a middle finger to the victims of those who died on 9/11.

Of course, we were opposed by the might of America's powerful mosque establishment and their Muslim Brotherhood affiliates. If the Islamists were not enough, we also faced opposition from such teary-eyed, bleeding-heart White liberals as New York mayor Michael Bloomberg and much of the media.

We understood that these well-meaning people were acting in good faith, but also recognized that unfortunately these liberals were blind to the Islamist agenda in North America. In the end, better sense prevailed and the Ground-Zero Mosque never happened.

A similar battle has now broken out in Toronto, Canada. A two-storeyed mural in graffiti art displaying a Jihadi battle prayer today adorns the entrance of a Toronto area mosque, talking of "imminent victory" of Muslims, one that is guaranteed by Allah. 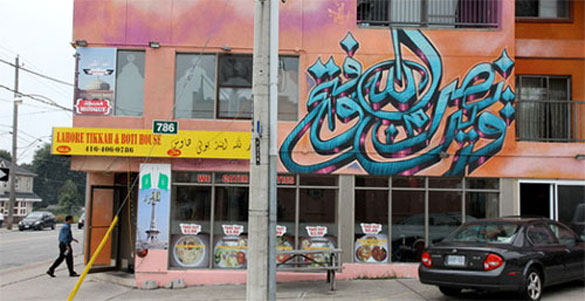 What is worse, the mural was paid for by the City of Toronto. In essence the taxpayers of Toronto, most of them non-Muslim, paid for a mural that prays for their defeat at the hands of Muslims!

To understand the Jihadi significance of the words on this mural, its best to go to places where Jihadi terrorists are fighting Islamic wars -- Syria and Pakistan.

On October 10, in the capital city of Daraa province in southern Syria, the Jihadi terrorists from the al-Qaida-affiliate in Syria, Jabhat al-Nusra defeated the Syrian army and captured the town.

As masked bearded men flashing AK-47s chanted "Allah O Akbar" behind him, Abu Abd al-Malik the local commander of the Jihadi group boasted to cameras that it was Allah himself that had in the Quran guaranteed al-Qaeda's victory, as he recited the same verse that is inscribed on Toronto's Jihadi mural.

Reciting verse 13 from the Quranic chapter titled "The Battle Array," Nasrum Min'Allah Fathun Qareeb [Help from Allah and an imminent victory], al-Malik said, Allah has guaranteed success to Muslims in their fight against the infidel.

And if the words of an al-Qaeda commander invoking the same verse the City of Toronto commissioned at the entrance of a Toronto-area mosque were not sufficient evidence that these words are associated with military victory of Muslims over non-Muslims, a senior leader of the Taliban uttered them in Pakistan.

Adnan Rasheed is better known as the Taliban commander who sent Malala Yusufzai a letter explaining to her why she deserved to be shot dead. This former Pakistan Air force officer was convicted for an attempted assassination of former president Musharraf of Pakistan, but was rescued from prison in a daring raid by the Taliban.

Addressing fellow Jihadi terrorists imprisoned around the world, Adnan Rasheed had this to say:

"So you should not grieve over the fact that you are spending the blossoming part of your life in detention. Rather you should be happy. Because even your sleeping is worship. Your living in jail is worship. Finally I want to say this that the "Help of Allah is on its way. The help from Allah is near. Our victory is near. Nasrum Min' Allah wa Fathun Qareeb, [the exact words painted on the mural]."

The Muslim Canadian Congress (MCC) launched a petition, asking the Mayor and Toronto City officials to take down the Jihadi battle prayer that they said was masquerading as "graffiti art."

The MCC petition was rejected by city staff without giving the petitioner Salim Ahmad any chance to argue his objection to the city funding a Jihadi mural on a street.

Supporters of the Jihadi mural, both working as Toronto City managerial staff and one Anver Emon, a Sharia-supporting Islamic academic at the University of Toronto, quickly declared that what was demonstrably a Jihadi battle prayer for the last 1,400 years of Islamic wars, was in fact an innocent prayer that is used by ordinary Muslims when facing difficulty in life.

To suggest that a chapter that has the title "The Battle Array" is not about battle, but about peaceful endeavour, is embarrassing. This line of argument demonstrates the intellectual dishonesty many Islamists employ in the detestable, yet permitted practice that allows Muslims to utter misstatements in defending Islam, better known as "Taqiya," a form of religious dissimulation.

In addition, the argument that "The Battle Array" verse also means a prayer for personal accomplishment, does not withstand scrutiny if we turn to the many authoritative commentators of the Quran, from medieval times to the 20th century.

According to Ibn Katheer the 14th century Islamic scholar, the words, "Help from Allah [is near] and a speedy victory [is assured]" in the chapter titled "The Battle Array," Muslims are told that if they are willing to sacrifice their lives and possessions in the service of Allah, then, not only will they find Paradise after death, but the conquest they desire over their enemy will be theirs very soon after they confront the enemy.

And a more contemporary Islamic scholar, Mufti Muhammad Shafi in his nine-volume "Comprehensive commentary on Holy Quran," had this to say about the "Battle Array" verse painted on the Toronto mural:

"There is one blessing that will be granted [by Allah] in this world. Which is the Divine help and imminent victory, that is, conquests of enemy territories? If the word Qareeb (near) is the opposite of Hereafter, it would include all later Islamic conquests of Arab and non-Arab territories."

Who is this enemy that the Toronto mural wants Muslims to fight against? Where is this non-Arab territory that this mural wishes us Muslims to conquer and be victorious over? Could it be Canada?

In addition, a picture of a medieval sword from an Islamic army with the verse inscribed on the sword handle was presented to City officials and City councillors, but all this evidence was dismissed by the City Manager who ruled he had consulted with two Islamists and they had convinced him the MCC objection to the Jihadi prayer was without foundation. 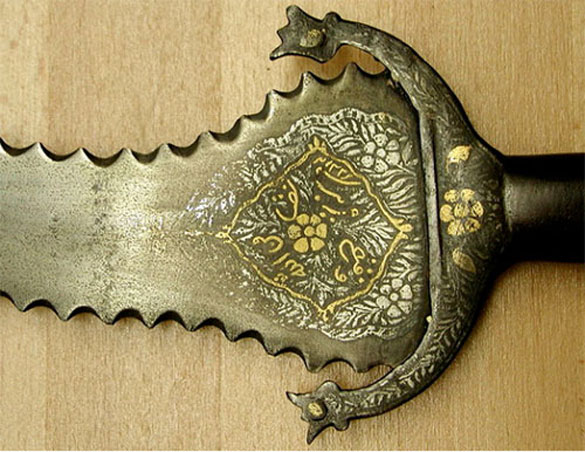 Obviously the Toronto City Manager Joe Pennachetti and his staff did not understand what is meant by the words "to the annihilation of the enemies of the religion [Islam] after Allah bestowed us the victory and the clear conquest."

So here is the correct translation of the words of the al-Qaeda commander and the transcript:

"Allah, Glorified and Exalted be He, says, 'And [you will obtain] another [favour] that you love - victory from Allah and an imminent conquest" (وَأُخْرَىٰ تُحِبُّونَهَا نَصْرٌ مِنَ اللَّهِ وَفَتْحٌ قَرِيبٌ). This statement is an expression of joy and happiness for the victory of Allah Almighty by the hands of his servants the believers in Jumruk, in Harat al-Badu and in the Hajana Battalion after Allah, Glorified and Exalted be He, assured our brothers the Mujahideen in this night their conquests [the three aforementioned places in the area of Daraa] and the defeat of the infidel army Thanks to God Almighty. This is an expression of love, sign to believers in black [Qaeda' black uniform], message to the forces of the Mujahideen and [testament] to the annihilation of the enemies of the religion [Islam] after Allah bestowed us the victory and the clear conquest."

And if either the Taliban or al-Qaeda using the "Battle Array" chapter of the Quran to mobilize for Jihadi war is not convincing, perhaps City Manager, City Councillors and their staff should listen to this war song, using the same Battle Array verse to whip up Muslim anti-Semitism as well fan the flames of Muslim victimhood.

I have asked apologists of Toronto's Jihadi mural to produce evidence where this verse was placed outside a hospital, orphanage, school, charity or even a mosque, from anywhere in the Islamic World, but they have nothing to show for their claim.

In two Islamic countries where I spent my youth -- Pakistan and Saudi Arabia -- the only use of this verse was in context of war, battle or victory over infidels, never as a symbol of welcome, happiness, family, spirituality or piety. War, battle and victory over the enemy was the only context in which the Battle Array verse Nasrum Min' Allah wa Fathun Qareeb has been used.

Raheel Raza, head of the group 'Muslims Facing Tomorrow' co-authored an op-ed with me on August 7, 2010 in the Ottawa Citizen that exposed the real agenda of the people behind the Ground-Zero mosque.

What is happening in Toronto four years later is the same game that was played out in New York City in 2010. Its part of the soft-jihad waged by Islamists and their left-wing allies, one that uses Islam and multiculturalism to whip up an anti-West sentiment among Muslim youth and create symbols that can be seen as a middle finger to the "Great Satan."

Our Ottawa Citizen op-ed on the NYC Ground-Zero Mosque was aptly titled "Mischief in Manhattan." The Jihadi mural in TO will be known as "Taqiya in Toronto."