“Death to Israel,” the banner screamed.

Next to it was the now-familiar Muslim chant, “Death to America.”

Further down the road, the late Ayatollah Khomeini stared down angrily at the citizenry. 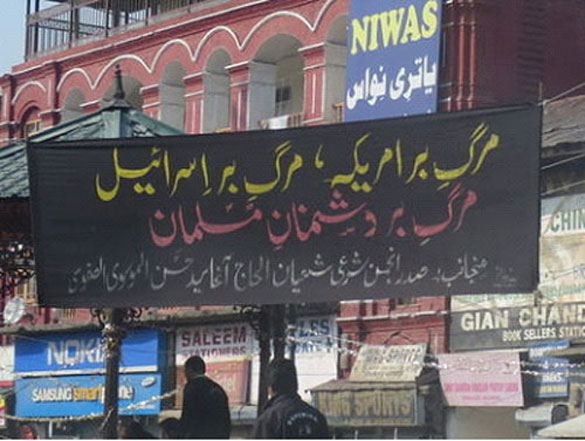 Banners, written in Persian, read “Death to Israel” and “Death to America” are prominently displayed in Srinagar, the summer capital of the Indian state of Jammu and Kashmir. Tarek Fatah photo

No, I was not in Tehran or South Lebanon.

This wasn’t an Alawite stronghold in Syria or scenes from Toronto’s infamous annual “Al-Quds” rally staged by Islamists belching disdain towards the West.

I was in Srinagar, the summer capital of the Indian state of Jammu and Kashmir.

Flaunting hatred and celebrating Jihadi terrorists was once unthinkable in the city referred to by a Mogul king as paradise on earth.

Home to a people of amazing beauty, culture and cuisine, where an Islam once flourished that was bereft of the harshness of the desert.

Though the Pakistan-backed insurgency that broke out in 1989-90 has been largely decimated by the Indian Army and the Kashmir government, consequences of the decade-long strife remain.

After all, 40,000 young Kashmiri Muslims died and almost the entire Hindu population of the valley was ethnically cleansed and forced to flee from their ancestral homeland.

The hope of one segment of the population that Kashmir would join Islamic Pakistan seems a forgotten dream.

There is a recognition in the valley that being puppets in the hands of Islamabad’s deep state and its state-sanctioned Jihadi terror networks, offers Muslim Kashmiris no better life than what Pakistan has offered to the 100 million Bengalis who seceded from the country to form Bangladesh in 1971. Or to the Baloch, fighting to end Pakistan’s occupation of Balochistan.

However, the anti-India “Azadi” movement has not been quelled. It was never a nationalist cause where Kashmir’s Muslims and Hindus would live as equals in a secular, liberal democracy, but now pan-Islamism is unashamedly touted as the basis of a future state.

Today’s militant Islamic youth of Kashmir carry placards of bin Laden in anti-India rallies and hoist Taliban flags, while their Shia Muslim rivals are inspired by Khomeini and Hezbollah.

A senior Kashmiri Muslim police officer confided “over 50% of Kashmiris between the ages of 15 and 30 are hard-core Islamic militants, not Kashmiri nationalists.”

Even the most moderate and liberal of Kashmir’s Muslim leaders, Yasin Malik, chairman of the Jammu Kashmir Liberation Front, and a darling of the left, said Saturday that Islam, as in the past, can still lead the whole world if Muslims unite and become one body.

Addressing a religious procession, he said:

“The enemies of Islam and Muslims are hell bent upon dividing the Muslims in the name of caste and creed. These people want to see us fighting on small differences, so that we never emerge as one nation and Ummah.”

While New Delhi seems to believe it has put down a Pakistani-backed uprising, it will be remiss if it does not pay attention to this banner, hung across the city’s Budshah Bridge fly-over that lies in the shadows of the state legislature:

“Beware of the leaders of American Islam, whether they are in the garb of religious scholars or in the shape of politicians.”