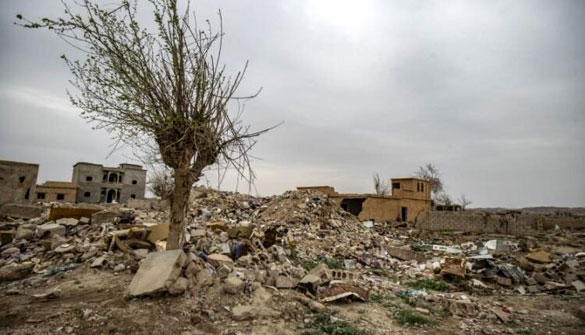 Baghouz, a day after the Islamic State was declared defeated there in March 2019 [Getty]

Though many took Trump’s triumphalist hyperbole on his administration’s victory over the Islamic State group (IS) last year with a pinch of salt, the status of the group in Syria has slipped almost out of sight in western media and political discourse.

Despite earlier reports the group had been vanquished in all areas of Syria controlled by the Assad regime, it has survived and even thrives west of the Euphrates, with particular successes in the Hama region of the Syrian desert.

Just this week the Syrian Observatory for Human Rights (SOHR) reported the ‘strong comeback’ of the group there, and journalists on the ground corroborate reports it seized control of regime-held positions in Hama. Though Assad-Iran-Russia were, like Trump, quick to declare victory over IS, the reality is that the fight against the Salafi-jihadist group has never been over in these desert areas.

According to the SOHR, IS has recently advanced forcefully in Al-Shakusiyah and al-Rahjan, defeating pro-Assad ground forces despite heavy air cover from Russia. This presents a major new escalation in the capabilities of the group, but not an unexpected one.

IS has, for most of its existence in Iraq and Syria, survived and even flourished as an entity that doesn’t require fixed territory. Its self-proclaimed status as a “caliphate” in 2014 runs contrary to the history of the group as guerrilla insurgents.

Since the end of the destruction of its caliphate, IS has mostly carried out ambush attacks and waged guerrilla warfare against its enemies.

In a repeat of Assad’s early policies that tactically ignored IS, this has granted them an essentially open field in which to operate

These kinds of attacks have recently been ramping up in Syria, with the group carrying out its deadliest post-caliphate attack on 30 December, killing 37 regime soldiers in a well-planned ambush on a military convoy in the area straddling Deir az-Zour and Homs. This was followed by another major ambush just days later on 3 January, with at least 15 people, including civilians but mostly pro-regime fighters, were killed in the Wazi al-Azib area of Hama.

These attacks demonstrate the increasing confidence and military sophistication of IS, as well as its growing reach, but the ability to wage ground offensives ought to be an ominous red line.

Assad and his backers were always going to struggle to contain IS. Though it seems to be a lesson not learned, raw power and state terror run contrary to an effective “counterinsurgency” policy.

Given history appears to be almost repeating itself, it’s worth looking back to a time when the forces that would become IS were truly at death’s door; when the Iraqi government embraced non-sectarian policies to fight them.

In a break with using sectarian militias and aerial bombings, Iraq and the US funded the Sunni Awakening Movements (Sahwah) as a force comprised of locals, to rid their cities, towns and neighbourhoods of the extremist menace.

It was a major success, until Iraq went down a path of discriminatory sectarian policies that meant defunding the Sahwah. This, along with the civil war in Syria, was a major shot in the arm to the then dwindling numbers of violent extremists.

Parallels with the situation today are possibly even more relevant than with the initial rise of Islamic State. Not only do Sunni populations in areas conquered by Assad find themselves at the mercy of sectarian foreign forces allied to a regime hell-bent on the brutal collective punishment of locals, but their precarity is made even worse by the socioeconomic devastation caused by years of war, and now Covid-19.

Moreover, the Syrian regime simply doesn’t have the manpower or resources to police the vast desert regions that IS is successfully navigating, as military resources have been prioritised for the final conquest of Idlib – the last liberated province of Syria. In a repeat of Assad’s early policies that tactically ignored IS, this has granted them an essentially open field in which to operate.

With traumatised populations threatened by state terror, living often in towns and neighbourhoods reduced to rubble by Russian and coalition bombing, as well as the economic crisis engendering starvation and extreme poverty, Syria is fertile ground for IS’ exploitative sectarian tactics. It’s no wonder that they have managed to move beyond survival to expansion.

This exposes the fundamental flaw at the heart of the coalition strategy of focusing solely on IS and allowing Assad-Iran-Russia to get away with slaughtering rebel forces and populations, that are the natural vanguard against IS.

With the US ravaged by Covid-19 and consumed by the crisis of Trump’s bitter attempts to subvert democracy, the threat of an IS resurgence might currently be far from the top of President-elect Joe Biden’s agenda. But that’s where it ought to be.

The area controlled east of the Euphrates by the US-backed Syrian Democratic Forces (SDF), and which hosts US troops, has also seen an uptick in IS activity in recent months.  Trump’s blind triumphalism regarding IS in Syria pointed only to his disinterest and will to abandon the SDF. This has emboldened the return of IS, while it has also set up Biden to inevitably clash with his NATO ally, Turkey, if he looks like reinvigorating the SDF, which Turkey deems an enemy terrorist group.

But Assad remains the biggest open question for the US.  Though it’s extremely unrealistic that any US president would at this point call for regime change, it is hoped that Biden would recognise on a policy level that Assad’s state terror and terminal instability is not just an evil in itself, but one that begets more evil – in the form of IS.

It was Obama and Biden who first decided to abandon the Syrian rebels to focus on fighting IS, with the logic of protecting their regional allies and stopping attacks launched on the West. But the root causes of IS in Syria were never adequately addressed. Today, only the end of Assad’s brutal war and the liberation of Syrians will definitively drain the swamp within which IS lurks.