Islamic State Wilayat Khorasan, A Pakistan Phenomenon to Unleash a Proxy Force in Afghanistan Parallel to the Taliban

The Islamic State Khorasan Province (ISKP) is known to have established considerable presence in Afghanistan, and has been responsible for many major attacks that have taken place in the country this year itself. While there is raging debate about whether the Taliban and the ISKP are foes or operational allies, there is little doubt that ISKP continues to pose a threat to the ongoing peace process, and Afghan security large. 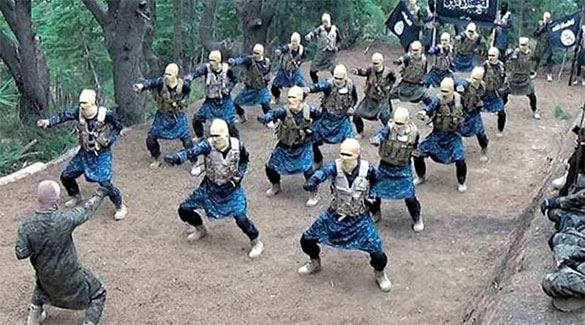 Opening the discussion, Rakesh Sood introduced the report and reflected upon the need to discuss the ISKP. Thereafter, Hussain Ehsani, as one of the authors of the report, highlighted the lack of general understanding that exists while observing ISKP due to its vague nature, conspiracy theories surrounding the outfit, and polarised perspectives of individuals on the ideological motivations and associations of the terror group. Talking about the methodology of the study, Ehsani elaborated on the extensive literature review conducted and the open-ended questionnaire used to interview government officials, policymakers, jailed members of ISKP and others, which shaped his study. On the support-network front, he emphasised ISKP being a fractured entity, where the area controlled in western Afghanistan was dependent on Iran, while the northeastern pockets of Nangarhar and Kunar relied on Pakistan. He also pointed out the difference between a Wilayat and Khilafat (Caliphate), noting that a Wilayat is created within the borders and a Khilafat, beyond. This nature of ISKP made it distinct from the Islamic State Central.

Classifying the various terror outfits operating out of Afghanistan into four distinct groups, Arian Sharifi noted the four categories as:

• Pakistani groups operating out of Afghanistan,

• regional groups that have their objectives outside Afghanistan but use Afghan territories to plan and execute attacks, and

• the global groups such as the likes of Islamic State and Al-Qaeda.

Sharifi also shared his views on the evolution of ISKP and how the group not just sustained in its strongholds but thrived since its inception there. According to his assessments of eastern Afghanistan, ISKP grew tremendously 2016 onwards, despite the fact that over 5000 fighters of the movement have been killed over the last five years and more than 1,500 have been injured. Sharifi highlighted five key reasons to believe that ISKP is going to be the next chapter of the war in Afghanistan:

1. The history of the growth: Individual aspirations drove fighters from abroad to converge and join the movement in Afghanistan.

2. Ideology as a driving force: The belief of building a political system based on Islamist fundamentalism still exists among the Afghan population.

4. An alternative to the Taliban: Hardliners among the Taliban find a new resort in the objectives of the ISKP.

5. ISKP as a Pak-phenomena: Pakistan has unleashed a proxy force in Afghanistan parallel to the Taliban.

Talking about Pakistan’s objective of creating ISKP, Amar Sinha noted that the terrorist group created a corridor between Pakistan and Central Asia considering the geopolitical factors. While the claims of Taliban supporting ISKP remain intact and widely discussed, Sinha maintained that the Taliban feared losing control of the territory and needed an alternative to engaging government forces, when forced to negotiate peace with the concerned parties. He ended his remarks by putting out a question for the researchers, on whether the United States sees ISKP as a global threat or a part of the Taliban.

Observing the role of major global powers while discussing ISKP, Indrani Bagchi highlighted how the US and Russia perceive the group differently. Russia sees the rise of ISKP as the next war in Afghanistan that could be fought alongside the Taliban, while the US maintains that the main war remains with the Taliban and not the ISKP. Bagchi also commented on how Islamic State tactics and ideologies blend with existing radical ideologies in parts of South Asia, which has led to increased radicalisation in Kashmir, parts of southern India and Bangladesh.

Kabir Taneja gave a brief background of the first Wilayat created during the five-month long armed conflict of the Marawi Siege that took place in the Philippines in 2017, and shed light on the alliance of the Wilayat with the Islamic State-Central. According to him, critically examining the background of the Wilayat and its acceptance by the IS-Central is of great significance. Taneja also talked about the different strategies employed by the ISKP, which allows them to market the brand of IS to gain territory.

During the interactive session thereafter, important questions were raised by members of the audience on various issues surrounding ISKP, beginning with the future of ISKP in Afghanistan, ISKP being a cover for Taliban activities, and the role of regional stakeholders in combatting the spread of ISKP. In the end, the panel was unanimous in their concern about the continuing threat of ISKP in Afghanistan, and on the need to address the rise of the terror group in the region.