Pakistan’s international image continues to get battered on account of a number of issues, terrorism being the foremost cause of concern. Recently, the United Nations, as well as the US State Department, released a wide range of observations, asking Pakistan to comply with stipulations to contain terrorism, but they have gone unheeded. 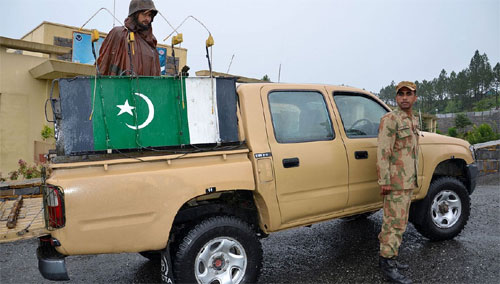 As things are rapidly unfolding in Pakistan’s domestic politics triggered by the failure to battle the Covid menace, the Pakistan Stock Exchange (PSX), situated in the heart of Karachi, was hit by a deadly terrorist attack. Four persons, including security guards and a policeman, were killed.

The act was quite chilling. While the Baloch Liberation Army (BLA) claimed responsibility for the attacks, all four terrorists, armed with most sophisticated weaponry, were gunned down by the counter-terror forces. While the deaths of the attackers may offer some succour to the establishment, the high-voltage ISI and Pakistan Army were left red-faced at the effontery with which the terrorists breached the fortified premises.

The attack has sent a strong message about chinks in Pakistan’s armour and the fragility of its security apparatus. As expected, the Pakistani establishment was quick to shift the blame on India as there are no other convenient or convincing excuse available to counter public and opposition criticism.

To make matters worse for the country’s image, the European Union Aviation Safety Agency (EUASA) has in a recent order banned operation of all Pakistan International Airlines (PIA) flights within and outside Europe for a period of six months. This is a huge blow to Pakistan and its national carrier, which even otherwise did not have a great reputation.

These orders come in the wake of recent revelations by the Pakistan Civil Aviation Authority that at least 260 flying licenses, out of a total of 860, were fake. This has caused a huge sensation in the aviation world globally and suggests that the country has treated passenger safety in a most cavalier fashion.

Simultaneously, acting on safety and security concerns, the UK Civil Aviation Authority has suspended all PIA flights to and from Manchester, Birmingham and London. Alarmed by the incidence of PIA pilots flying with fake licenses, Air Travel Focal Points (ATFP) has also notified all UN travellers not to fly PIA. This is a tremendous blow to Pakistan and its national carrier.

A PIA Airbus A320 flight had crashed on May 22 this year near Karachi airport killing 97 people. This had raised serious questions about the competence of PIA and many people have not accepted the findings of the preliminary investigation report.

Knowledgeable sources assert that the PIA management has been taken over systematically by serving and retired Pakistan Air Force officers, affecting its autonomous character and ensuring that the airline’s operations steeped in nepotism and corruption, affecting its operational capabilities. The Karachi crash and the revelations of fake licences have compounded the problems for Pakistan leading to these radical measures by the UN and the EU.

This gives an idea of the gigantic scam taking place, which threatens the lives of thousands of flyers. Ethics and commitment are conspicuously missing. The revelations have had repercussions elsewhere too. To add to Pakistan’s shame, 27 of its nationals flying for Vietnam Airlines, were grounded after the scandal erupted. Clearly, it will be an uphill task for Pakistan to repair its battered image.

Judging by the spate of negative happenings which have overwhelmed Pakistan, it would seem that luck is running out for Prime Minister Imran Khan due to his countless failures in governing the country. He should have no reasons to be jubilant on completing two years in office next month. The severe blows taken by PIA internationally cap other glaring failures.

His credibility has hit rock bottom and to an extent that his pointing fingers at India for Monday’s attack may find few takers.

Shantanu Mukharji, a retired IPS officer, is a security analyst and a freelance columnist on matters of security. He is also a former National Security Advisor to the Prime Minister of Mauritius. The views expressed are personal)