FAISALABAD: A heavy police contingent on Friday, on the demand of a banned organisation, removed Quranic verses and religious texts written on tombstones of Ahmadi graves to save the area from clashes on religious grounds. 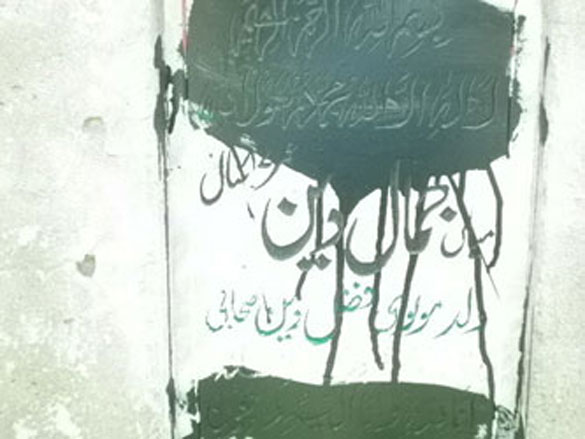 An application was moved to the area police of Uncha Mangat claiming Kassoki villagers’ demands of the removal of Quranic verses and religious text from Ahmadi graves in the graveyard on Hafizabad-Sheikhupura Road.

The applicants threatened of religious clashes and bloodshed if this was not done.

The DPO Hafizabad asked the police station in charge to take appropriate steps for averting any untoward incident or clash on religious basis.

The local SHO summoned elders and notables of the Ahmadi community of the village who met him under the supervision of Nasir Javaid, acting Ameer Jamaat Ahmadiyya, Hafizabad.

The SHO, according to Nasir Javaid, asked them to remove religious inscriptions, adding that if they did not do so themselves, the police would take measures for removing them in order to maintain peace and tranquillity in the area.

When they disagreed, says Nasir, the police went on with the operation anyway and forcefully entered the graveyard and whitewashed all religious text from the graves late Friday.

Calling it a positive achievement, the SHO claimed that no case had been filed against the act as it was meant to save the locality from clashes.

Secretary Amoor-e-Aama, Jamaat Ahmadiyya Faisalabad, Syed Mahmood Ahmad Shah, however, criticized the action and said that the persecution of Ahmadis was wrong and may lead to increased hatred between the two communities.

He demanded that the government take appropriate steps to save the Ahmadi community from such “unjustified and cruel acts of other communities”.

There are about 150 Ahmadi graves located in the graveyard while about 35 graves of Muslims are also found there.

Prior to declaring the Ahmadis a minority in 1974, Muslims used to bury their dead in this graveyard. Later, the graveyard was demarcated into two parts for burying Muslims and Ahmadis separately.