Quite often when I am doing speaking engagements, client briefings or press interviews, I am asked questions like: “Given the events in Syria and Libya, is the jihadist movement stronger than ever?” It is a good question, but it is also one that is not easily answered in a five-second sound bite or a succinct quote for print media -- it really requires some detailed explanation. Because of this, I’ve decided to take some time to provide a more thorough treatment of the subject in written form for Stratfor readers. As I thought through the various aspects of the topic, I came to believe that adequately covering it requires more than one Security Weekly, so I will dedicate a series of articles to it. 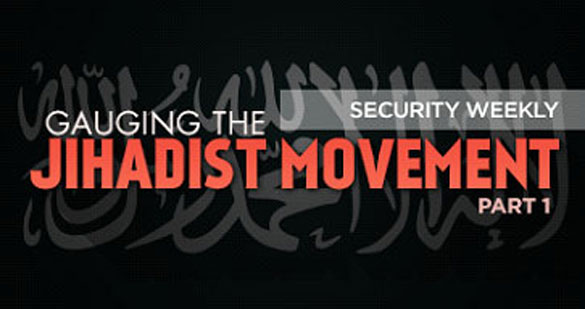 When gauging the current state of the jihadist movement, I believe it is useful to use two different standards. The first is to take jihadists' goals and objectives and measure their progress toward achieving them. The second is to take a look at insurgent theory and terrorism models to see what they can tell us about the state of jihadist militant networks and their efforts. This week we will discuss the first standard: the jihadists’ goals and objectives. Next week we will discuss insurgency and terrorism theories, and then once we have established these two benchmarks we can use them to see how the various elements of the jihadist movement measure up.

There is a widely held narrative that jihadists are merely crazy people who employ violence for the sake of violence. This is clearly false. While there are unquestionably some psychotic and sociopathic personalities within the movement, taken as a whole, jihadists' use of violence -- both terrorism and insurgency -- is quite rational.

It is also worth remembering that terrorism is not associated with just one group of people; it is a tactic that has been employed by a wide array of actors. There is no single creed, ethnicity, political persuasion or nationality with a monopoly on terrorism. Jihadists employ terrorism as they do insurgency -- as one of many tools they can use to achieve their objectives.

Arguably, the objectives the jihadists are pursuing through the employment of violence are delusional. Although we can question whether or not they will be able to achieve them through violent means, we simply cannot dispute that they are employing violence intentionally and in a rational manner with a view to achieving their stated goals. With that in mind, we will take a deeper look at those objectives.

It is very important to understand that jihadists are theologically motivated. In fact, in their ideology there is no real distinction between religion, politics and culture. They believe that it is their religious duty to propagate their own strain of Islam along with the government, legal system and cultural norms that go with it. They also believe that in order to properly spread their strain of Islam they must strictly follow the example of the Prophet Mohammed and his early believers. While all Muslims believe they must follow the Quran and the Sunnah, the jihadists allow very little space for extra-religious ideas and severely limit the use of reason to interpret the divine texts.

Historically, after leaving Mecca, Mohammed moved to Medina, where he established the world’s first Islamic polity. He and his followers then launched military operations to raid the caravans of their opponents. Mohammed’s army eventually conquered Mecca and a large portion of the Arabian Peninsula before the Prophet’s death. Within a century of Mohammed’s passing, his followers had forged a vast empire that crossed North Africa and most of Spain to the west, reaching to the borders of China and India in the east. Just as Mohammed and his followers had conquered much of the known world, the jihadists seek to reconquer this empire and then expand it to encompass the earth.

The jihadists’ plan is to first establish a state called an emirate that they can rule under jihadist principles, and then use that state as a launching pad for further conquests, creating a larger empire they refer to as the caliphate. Many jihadist ideologues believe that the caliphate should be a transnational entity that includes all Muslim lands, stretching from Spain (Al-Andalus) in the west to the Philippines in the east. The caliphate would then be extended globally, bringing the entire world into submission.

Now, that said, it is important to remember that the jihadist movement is not monolithic and that there are varying degrees of ideological difference -- including goals and objectives -- between some of the various actors and groups. For example, some jihadists are far more nationalistic in philosophy and less transnational. They are focused on the overthrow of the regime in their country and the establishment of an emirate under Shariah. They are not concerned about using that emirate as a launching pad for the re-establishment of a wider caliphate. This nationalist vs. transnationalist tension was readily apparent in Somalia between the various factions of al Shabaab. Some jihadists also believe that there cannot be one global caliphate due to differences among Muslims, and instead seek to establish a series of smaller states that would span the same territory.

Jihadist ideologues and leaders have openly stated these intentions, but they are not just rhetorical goals for public consumption. A review of the private writings of jihadist leaders as well as the actions taken by jihadist operatives in the field clearly demonstrate the strong intent to achieve their aims.

One of the most insightful looks into al Qaeda's strategy came in the form of a letter released by the U.S. government in 2005 from the organization's then-deputy leader (and current emir) Ayman al-Zawahiri to Abu Musab al-Zarqawi. Al-Zarqawi was the leader of al-Tawhid wal-Jihad, a jihadist group operating in Iraq that had pledged allegiance to al Qaeda and changed its name to al Qaeda in Iraq. The group later turned into an umbrella organization comprising several jihadist groups and was renamed the Islamic State of Iraq. More recently, due to its efforts in Syria, the group has changed its name to the Islamic State of Iraq and the Levant.

Al-Zawahiri’s letter to al-Zarqawi was remarkable for a number of reasons, one of which was its elucidation of al Qaeda's goals. In the letter, al-Zawahiri wrote: "It has always been my belief that the victory of Islam will never take place until a Muslim state is established in the manner of the Prophet in the heart of the Islamic world." He also noted that the first step in such a plan was to expel the Americans from Iraq. The second stage was to establish an emirate and expand it into a larger caliphate. The third stage was then to attack the secular countries surrounding Iraq (Saudi Arabia, Kuwait, Syria and Jordan) and bring them into the caliphate. The fourth step was to use the power of the combined caliphate to attack Israel.

The strategy laid out by al-Zawahiri clearly resonated with the Iraqi jihadists, and their subsequent actions demonstrate that they have embraced it. Even their name, the Islamic State of Iraq and the Levant (in which they emphasize the state), reflects their desire to establish a jihadist polity. In addition, the civil war in Syria has provided the Islamic State of Iraq with the opportunity to push into the neighboring secular country, where it has made a concerted effort to seize, hold and govern territory.

The Islamic State of Iraq and the Levant is not the only jihadist group to attempt to establish an emirate. Al Qaeda in the Arabian Peninsula made a concerted effort to seize, hold and govern territory in southern Yemen as a result of the Yemeni revolution in 2011, briefly controlling a substantial swath of territory there. Al Shabaab has controlled and governed parts of Somalia for several years now (though recently the group lost significant portions of it). Al Qaeda in the Islamic Maghreb temporarily established an emirate in northern Mali in 2012, and the Nigerian jihadist group Boko Haram has attempted to establish control over areas in Nigeria’s north. At present, jihadist groups such as Ansar al-Shariah are seeking to establish control over territory amid the chaos in Libya.

This goal of establishing an emirate was also clearly articulated in two letters The Associated Press discovered in Timbuktu, Mali. They were written by Nasir al-Wahayshi, the leader of al Qaeda in the Arabian Peninsula, and sent to Abdelmalek Droukdel (also known as Abu Musab Abd al-Wadoud), the leader of al Qaeda in the Islamic Maghreb. In the letters, al-Wahayshi detailed some of the lessons and mistakes his organization had made while it was attempting to establish its emirate in Yemen. He clearly sought to share those lessons with al-Wadoud so that al Qaeda in the Islamic Maghreb’s emirate in Mali would be more successful.

In one of the letters, al-Wahayshi also explained that his group purposefully did not proclaim an emirate in southern Yemen. "As soon as we took control of the areas, we were advised by the General Command here not to declare the establishment of an Islamic principality, or state, for a number of reasons: We wouldn't be able to treat people on the basis of a state since we would not be able to provide for all their needs, mainly because our state is vulnerable. Second: Fear of failure, in the event that the world conspires against us. If this were to happen, people may start to despair and believe that jihad is fruitless."

Evidently al-Wahayshi’s advice went unheeded. Shortly after the jihadists declared an Islamic state called Azawad in northern Mali in April 2012, the French invasion pushed the jihadists out of the territory they had conquered, ending the short-lived state of Azawad. Letters found in Mali also reflected that Droukdel was found to have written to his commanders in Mali calling for them to refrain from fundamentalist and excessively brutal behavior that would jeopardize their objectives. We have also seen recent communications from al-Zawahiri criticizing al Qaeda in the Islamic Maghreb for the errors in Mali that led to its defeat.

These events show that establishing an emirate as a base from which to launch further expansion is at the heart of the jihadist strategy, remaining an important goal for the jihadist movement.