The Pakistanisation of Indonesia: Legal Infrastructure That Discriminates Against Religious Minorities, Allowing Islamists to Take the Law into Their Own Hands

Over the last few years, Jakarta has laid down legal infrastructure that discriminates against religious minorities, allowing Islamists to take the law into their own hands

The marble minaret of Jakarta’s largest mosque, the Istiqlal, and the cast iron steeples of the city’s Catholic Cathedral, jointly punctuate the city-centre’s skyline. The adjacent location of these two places of worship is a powerful, sensory manifestation of Indonesia’s multi-religious and tolerant ethos.

Indonesia is the world’s most populous Muslim country. Although around 87 per cent of the population, or 210 million Indonesians, self-identify as Muslims, the nation is a tapestry of religions from Hinduism and Christianity to Confucianism and Animism. Scan any newspaper and the names that pop up — Teddy Anwar, Suryadharma Ali, and Veronica Colondam — confirm the syncretism that has long defined this part of the world.

As a Muslim-majority, democratic republic, whose constitution guarantees the right of citizens to freedom of religious belief and practice, Indonesia is a rare creature. The U.S.-based Appeal of Conscience Foundation awarded Indonesian President Susilo Bambang Yudhoyono a high-profile prize for promoting tolerance just last month. The country is, moreover, regularly feted by world leaders, as a beacon of moderate Islam and a model for the Muslim world.

And yet only a few dozen kilometres east of Jakarta, in the suburb of Bekasi, a group of 18 Ahmadis has been holed up inside a fenced-off mosque for over two months. They barricaded themselves inside in early April, after local police sealed it, placing locks on the entrances and erecting a fence of corrugated metal sheets.

They refuse to come out until the mosque is allowed to reopen and serve as a place of prayer for the area’s 400-odd Ahmadis. Until then, their only contact with the outside world is through a square slat that opens in a back door to the mosque. It is through this opening that food is passed to them and through which they talk daily with Mohammad Iqbal, the leader of the congregation, about his attempts to secure redress. All efforts, he says, have so far failed.

Outside the mosque, a local government-planted hoarding refers to a number of anti-Ahmadiya decrees and resolutions passed by religious and central governmental authorities. 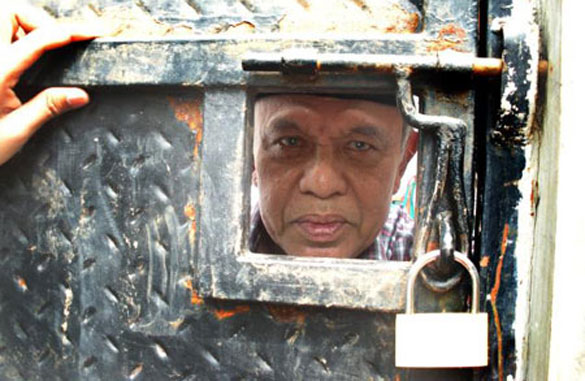 MELTING POT TO CAULDRON: An Ahmadi peers out of the sealed door of a mosque in Bekasi where he has been holed up for over two months. Photo: Pallavi Aiyar

In 2005, the Majelis Ulema Indonesia (MUI), a coalition of Muslim organisations, issued a fatwa condemning the Ahmadiya community as religiously “deviant.” Mohammad Iqbal dates the start of his communities’ problems to that year, with some members receiving threatening text messages on their mobile phones.

But the real harassment began later, after 2008. That year, President Yudhoyono signed off on a decree issued jointly by the Religious Affairs Ministry, Home Ministry and Attorney General, which ordered the Ahmadiya community to stop all activities that “propagated” its beliefs. The vagueness of the decree’s wording has emboldened some regional governments to interpret the law as an outright ban on the practice of the Ahmadiyya faith.

The Ahmadis are not the only ones to have fallen victim to growing intolerance. On a recent evening in Jakarta, this reporter spent several hours talking with victims of religious violence and discrimination from across the country. Their complaints ranged from administrative inconveniences, to intimidation, violence and even murder at the hand of hard line Sunni Muslims. The vast majority of Indonesia’s Muslims are Sunni.

Muhammad Zaini, a 22-year-old Shia from Madura, in East Java, spoke of 600-odd Shias being forced out of their homes from two villages in the area, when a 200-strong mob of Sunni Muslims attacked their homes in August 2012. Several houses were burnt down and Zaini’s paternal uncle was killed. The Shias are currently camped out in a refugee camp in a sports stadium. Local Sunni authorities have issued edicts against allowing their return.

Reverend Palti Panjaitan, of the HKBP-Filadelfia protestant church, talked about the seven churches in the Bekasi area (where Ahmadiyas were also under attack) that had been forcibly closed or demolished by local authorities since 2005. Christian congregations across the country have been having a difficult time in recent years securing permits for the construction of churches. There are an estimated 22 million Christians in Indonesia, comprising over nine per cent of the population.

Dian Jennie, a believer of the indigenous Javanese religion, Sapta Darma, elaborated the routine harassment faced by faiths not part of the six officially recognised religions of Indonesia: Islam, Hinduism, Buddhism, Catholicism, Protestantism and Confucianism. Mandatory state-issued identity cards for all adult citizens that list the holder’s religion, leave a blank space for those who don’t agree to be classified under any of the official religions. Citizens with blank spaces on their IDs are often pilloried as godless. Their children find it difficult to gain admission to schools and even getting their marriages registered can be impossible.

“What we are seeing,” says Andreas Harsono, an activist journalist and researcher for Human Rights Watch, “is a creeping Pakistanisation of Indonesia.” Harsono claims that like Indonesia, Pakistan too, was a relatively tolerant country until the 1970s. But the situation changed dramatically in the 1980s, one clear manifestation of this shift being Islamabad’s 1984 anti-Ahmadiya ordinance.

In Indonesia, the authoritarian regime of General Suharto from 1967-1998, had largely kept religion’s role in politics under check. Following the transition to democracy, however, Islamist political parties have been allowed to play an open, legal role in politics. Radical civil society groups operating outside the formal political system have also grown in size and influence. The latter include the notorious Front Pembela Islam, an organisation that was set up in 1998 with support from government security agencies and whose goons use Islamic edicts to justify vigilante actions against bars and nightclubs, as well as Christian churches and the mosques of so-called apostates like Ahmadiyas and Shias.

“Over the last eight years the government has basically laid down the legal infrastructure which discriminates against religious minorities,” claims Harsono. This allows Islamists to take the law into their own hands, while the police look the other way. He gives as examples a 2006 decree that has made it harder to obtain permits to build houses of worship for minorities, and an increasingly cavalier use of a 1965 blasphemy law.

A spokesperson for the Ministry of Religious Affairs, Mr. Zubaidi, dusts off such accusations. He admits that Indonesia has “small (religious) conflicts in a limited area. But we are a big country and despite everything, we maintain our unity.” He claims that at the level of policy, matters are improving, rather than deteriorating for religious minorities. He fails, however, to elaborate when pressed. He does agree that on “a social level” there might be some cause for concern regarding increasing intolerance.

It is true that for the moment at least, Indonesia is a far cry from Pakistan. The most popular face of Islam in the country is still the Nahdlatul Ulema (NU), the country’s (and the world’s) largest Muslim social organisation with 70 million members. The NU was founded in 1926 and has always defended a moderate and culturally rooted approach to Islam, in open opposition to more fundamentalist Wahabist interpretations. Islamist political parties have yet to win a single general election. In fact their showing at the polls has been worsening in the years since 1998.

Imam Pituduh, a member of the NU’s secretariat, looks more like a rock star than a cleric, with dark shoulder-length hair, shot through with silver, hanging loose about his face. He says the NU believes Islam in Indonesia can only survive by accepting its admixture with local traditions. NU imams, for example, use local beliefs in astrology to help decide on the names of newborns. “The real Islam is what we represent not what Wahabis claim,” he says. The imam is confident that “the people” of Indonesia will reject radicalism since it is not a part of their traditions.

Perhaps, but it is also a fact that religion’s role in Indonesian society has been growing. A new education bill is about to double the number of hours devoted to religious education in elementary schools at the expense of science classes. A new criminal code under discussion is proposing harsh punishments for couples who live together before marriage, and increasing the maximum prison term for adultery to five years from the current nine months. According to the Setara Institute, a non-governmental organisation that monitors religious freedoms, 264 cases of violent attacks on religious minorities took place in 2012, up from 216 in 2010.

Andreas Harsono remains deeply concerned. “Once you allow religion to pervade politics and society, it becomes very difficult to undo it in an Islamic context,” he concludes.