A Taliban Leader Gives out Taliban’s Plans for Indian Kashmir in an Interview with the Pro-Taliban Urdu Daily of Pakistan, Ummat

Kashmiri Leader Says India Will Have to Withdraw From Kashmir

1.       This hints Taliban plans for heightening militant activities in Kashmir in near future.

3.       India needs to chalk out a defence strategy in face of current challenges in Afghanistan.

According to MEMRI, the Afghan Taliban have made their intentions clear about Kashmir in an interview to Pakistan’s Urdu daily Ummat recently and this should alert India. The Taliban leader Farooque Rahmani said in no uncertain terms, “As has happened in Afghanistan, the occupation forces will have to leave Kashmir too.” He says,” The evacuation of the US and NATO forces from Afghanistan and Taliban’s advances has become a ray of hope for the oppressed Muslims of the occupied Kashmir.  All Party Hurriyat Conference convenor  Farooque Rahmani and other Kashmiri  ‘freedom fighters’ have described advances of the Taliban in Afghanistan as the writing on the wall for India.

Farooque Rahmani, the convenor of APHC, also said "We hope  that the advances of the Taliban fighters will have positive consequences for the region and the entire world.” 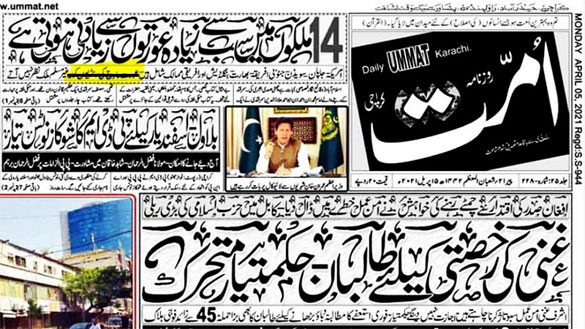 The interview should open India’s eyes and it should come out of the air of complacency. If the Taliban come to power in Afghanistan, they will certainly open a front against India. Pakistan is openly supporting Taliban in Afghanistan and for this it has already shifted terrorist outfits like Lashkar-e-Taiba and Jaish-e-Mohammad  to Afghanistan to help it against the Afghan government and fight India in case of Indian intervention. In return Pakistan plans to use Taliban in Kashmir.The interview exposes dangerous intent of Taliban and Pakistan in future. After Taliban gains a clear foothold in Afghanistan, it will expand its militant activities in Kashmir.

India has made investments worth billions in Afghanistan and Pakistan will try to dislodge India in Afghanistan both politically and economically. India has important trade interests in the country. Until now, India’s trade and economic interests were protected due to the US and NATO presence. But now that the US and NATO have left, India needs to chalk out its diplomatic and defence strategy to save its investments worth billions..

In this regard, India may have some lessons to learn from Russia. When its trade and economic interests were at stake because of the ambitions of the US and Saudi Arabia during the Syrian civil war, Russia took a hard and decisive stand that if the US and Saudi Arabia attack Syria, it will not sit silent but will wage a war to protect its investments in the region. Putin even ordered its military to remain on 2-minute mode meaning being ready for a full fledged decisive war. This aggressive posturing saved Russia the day and the US did not muster courage to attack and destroy Syria. Will India go to that extent to save its interests in Afghan? Only time will tell.