Religious Extremists Hurt the Very Religion They Claim To Represent: PM Modi, Welcoming King Abdullah II of Jordan in a Conference on Radicalisation of Youth 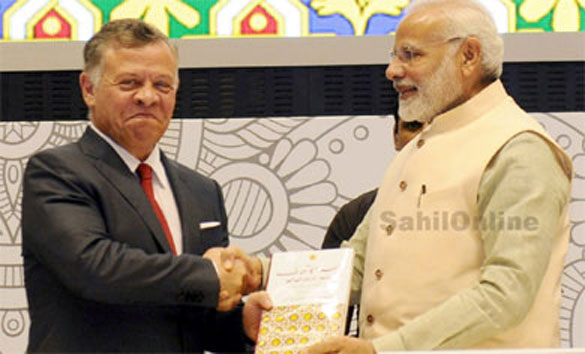 A conference was held today (1st March 2018) at New Delhi’s Vigyan Bhawan on ‘Islamic Heritage: Promoting Understanding and Moderation’.  The Prime Narendra Modi attended the event with visiting Jordan King Abdullah II, and a number of academics, Islamic scholars especially with Sufi background as well as representatives of all denominations of the Muslim community. Pakistan HC Sohail Mahmood was also amongst diplomats present at the venue. In this conference two historical speeches were made; one by the PM Narendra Modi and the other by Jordan King Abdullah II.

Addressing the audience including politicians, diplomats, academics and Islamic scholars, the PM first welcomed the participants, especially his chief guest Jordan King Abdullah II. He said, “King Abdullah's significant role in maintaining the true representation of Islam can’t be expressed in words. This can only be felt in heart and mind.” He said that the book “A Thinking Person’s Guide to Islam: The Essence of Islam in 12 Verses from the Quran” authored by Prince Ghazi Bin Mohammad, which has been launched now is actually a result of King Abdullah’s effort and that this book will help the readers understand Islam. He said, “King Abdullah’s acceptance of invitation to visit this country shows his love for India. Your Majesty, Your country and our friend Jordan has historical importance in India's religious texts. Jordan is situated on a sacred land from where Khuda Ka Paigham (the Message of God) was sent out across the globe.”

Talking about the importance of India in promoting the interfaith harmony, peace, love and tranquillity, the PM Modi said, “Many religions have been born and nurtured in the land of India. Message of peace and love has gone out from India to other countries. Be it Buddha or Mahatma Gandhi, the fragrance of peace and love has spread across the world from India.”

He added saying, “The capital of India Delhi is a land of Sufi saints. A very famous Sufi Nizamuddin’s shrine is located at only a little distance away from here. Delhi unites Ganga Jamuni Tahzeeb (culture of Ganga and Jamuna). From here, the Sufis and saints have given the message of peace, love, unity of humanity. This step has given the idea of ‘Vasudev Kutumbakam – which means that the whole world is our family. India found its identity in considering the people of this world as their family”.

Stressing that India embraced many religions, the PM Modi said, “Every religion flourished in India, it grew here. Every Indian is proud of this virtue, no matter what language he speaks, no matter what religion he practices, no matter whether he lights Diya in temples or worships in Masjids or Churches or Gurduwaras.”

He added saying, “We will be celebrating Holi tomorrow. There will be a celebration of Buddha Jayanti that will be followed by the month of holy Ramzan - a symbol of the country's unity and diversity”. He further said, “Indian democracy is a celebration of our age-old plurality. This is the strength which enables the Indians to respect the country’s past, trust its present and future. Our heritage, that is, our identity of unity and diversity is essential to fight and curb violence and terrorism. On the basis of our cultural heritage, inter-faith relations, religions and their principles, we can defeat terrorism and violence.”

The PM Modi said, “Religious extremists don't realize that their actions hurt the very religion they claim to represent.”

Expressing deep concern over the use of the religion for the act of terrorism, the PM Modi said “terror has no religion and that the fight or campaign against terrorism and radicalization is not against any religion. Our fight is against the radical mindset that misguides youth”.

The PM Modi said, “Muslim youth in India had the Quran in one hand and a computer in the other. Youth are radicalized and violence is inflicted on the innocent. Together we can fight terrorism”.

Praising initiative taken by King Abdullah II against terrorism, the PM Modi promised to support him in all possible ways.

Winding up his historical speech, the PM Modi thanked the audience for their participation.

After the PM’s speech, the Jordan King Abdullah II, who is a 41st-generation direct descendant of the Prophet Muhammad (peace be upon him) came to deliver his special address on “Islamic Heritage: Promoting understanding and moderation”.

In his speech, King Abdullah II said that the ideologies of hate distort the words of God to stir up conflict and justify crimes and terror. But faith is supposed to draw humanity together.”

Jordan King Abdullah II further said, “Islam teaches universal values. The world is one family. No matter how different we may be, we have a shared responsibility. Mercy and tolerance are the values shared by all.”

Quoting a Hadith he said, “The Prophet Mohammad, peace and blessings be upon him, said: ‘None of you has faith until you love for your neighbour what you love for yourself.’ Compassion, mercy, tolerance these are values that are shared by billions of Muslims and non-Muslims around the world. And these values require us, together, to act for our common future.”

Explaining the world’s fight against terrorism, he said, “And the truth is that today’s global war against terror is not a fight between different religions or peoples. It is between moderates, of all faiths and communities, against extremists whose faith is hate and violence.”

The Jordan King further said, “We need to make sure young people learn the true values of our religions. And let us teach them to honour our shared civilisation of global learning. Much ancient thought and science was preserved through the efforts of Islamic scholars working in the Arab House of Wisdom and elsewhere. And here in India, hundreds of years ago, Muslim scholars translated Sanskrit writings, and Hindu librarians collected texts of many traditions. And today, academics and scientists across the world share ideas that can take us all into an exciting future of prosperity and peace.”

Talking about the importance of faith in promoting goodness, social values, ethics, prosperity and principles of humanity, the King of Jordan said,  “It is faith that brings us the Golden Commandments, commandments held in common by multiple world religions, to love God and the good, and love our neighbour. It is faith that inspires the everyday experiences of people in countries like India and Jordan, where different religious and ethnic groups have lived and worked together in amity throughout history. It is faith that allows us to prosper and thrive, bringing together different civilizations and cultures around the common principles of humanity.”

The King added, “The world is one family, however different our families and countries are, we have a shared responsibility. Compassion, mercy, tolerance are values shared by Muslims and non-Muslims. Today's global war against terror is not a fight between people or religions. It is between murderers of our faith and humilities and against extremists whose faith is hate and violence. The war against terror is not one religion against each other but of moderation versus extremism and terrorism. We need to take back our spaces and airwaves back from those who speak the language of hate.”

“Compassion, mercy and tolerance - These are values shared by Muslims around the world. They are required for us to act together for a common future”, the king said.

Stressing on the need for a secured future, Abdullah II said, “We cannot afford to allow the young ones to live without hope. We need to build strong successful countries. And it is our defence against turmoil and promise of secured and peaceful future which will help us achieve this.”

“What is heard in news and what is shown about religion is all about what separates people. Around the world, suspicions are inflamed by what different groups don't know about others,” the King said.

“Jordan is working globally for dialogue in peace. The world is one family. However different our countries and people are, we have shared responsibility to each other as well as future,” he said.

At the end of the event, Maulana Mahmood Madani, an Indian politician was called on to briefly introduce the book “Islam Ka Ta’aruf” which is Urdu translation of the book “A Thinking Person’s Guide to Islam: The Essence of Islam in 12 Verses from the Quran” authored by Prince Ghazi Bin Mohammad. Maulana Madani said, the launch of this book is not a formality but a historical moment, as this book scholarly discusses the true meaning of Islam, universal message of love, peace and coexistence and that this book will be effective in removing the mutual misunderstanding and conflict.