Sufi Sunni Barelvi clerics, under the aegis of All India Tanzeem Ulama-e-Islam (AITUI), organised one-day international anti-terror conference in New Delhi’s Ramleela Ground on Sunday, where they proposed religious guidelines along with an anti-terror edict or Fatwa to prevent the spread of terror ideologies emanating from the neighbouring country. They also tried to address the current situation and problems of Indian Muslims. 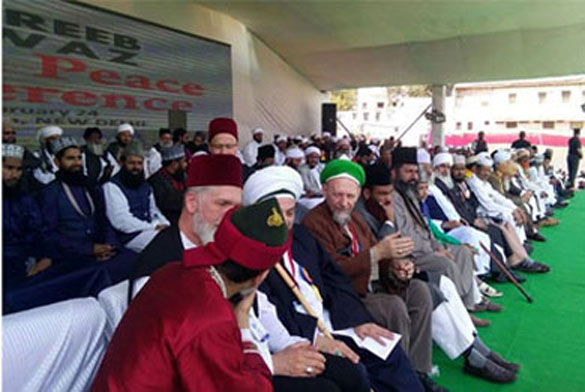 Talking to the New Age Islam, clerics associated with the AITUI said that the conference, known as “International Ghareeb Nawaz World Peace Conference”, sought to enlighten Indian Muslims about the menace of terrorism. Apart from prominent clerics from across the country, the local Muslims of Delhi, Haryana, Uttar Pradesh and Jammu & Kashmir also attended the conference. Islamic clerics and Sufi custodians from other countries including Bangladesh, West Indies, South Africa, Germany and Turkey also spoke in the event as the chief guests. Some of those prominent ulema who spoke to New Age Islam are: Sheikh Eshref Efendi of the Sufi Centre Rabbaniyya (a group of the Naqshbandi Sufi Order in Germany formerly known as Sufi Centre Berlin), Sheik Dr. Ismail Bin Kassim of World Shahadah Council in Malaysia, Maulana Shahabuddin Rizvi, Syed Muhammed Quadri of Muslim Students Organization of India, Maulana Sageer Ahmed Razvi of AITUI and Haji Shah Muhammad Quadri of Jamia Rabiya Basariya Delhi.

The founder and president of AITUI, Maulana Ashfaq Hussain Qadri, who was the main organizer of this event, launched an anti-terror fatwa which was issued by Sunni Darul Ifta’a located at Delhi’s Shastri Park. The fatwa written by Mufti Muhammad Iqbal Misbahi, a graduate of Jamia Ashrafia Mubarakpur of Azamgarh, made a few interesting points such as these:

“Terrorism leads to fitnah (chaos or tumult), and fitnah is more grave sin than even acts of violence and killing, as the Almighty Allah states in the Qur’an:  ‘Fitnah is worse than killing’ (2:191).

Jihadists interpret this famous verse from Surah al-Baqrah, like many other verses, as applicable to Muslims even today. This makes the Quranic verse appear self-contradictory. Jihadist ideologues have taken the word “Fitnah” to mean “Kufr” (infidelity) and “shirk” (associating someone with God) with an aim to kill all non-Muslims and even Muslims who indulge in shirk (in their eyes by venerating idols or visiting shrines etc). This requires a fresh reading of this Qur'anic verse with a deeper insight into its linguistic implications and Qur'anic exegeses. The above-mentioned anti-terror Barelwi fatwa does quote the same verse in its refutation to the terrorist views, but it doesn’t discuss it in detail. All it says is that “the pseudo-Islamic organizations are creating an atmosphere which is inimical to the religion of Islam itself”. Calling the act of cruelty "contradictory to the teachings of the Islamic shariah", the AITUI fatwa avers that “the un-Islamic acts of the so-called Muslim outfits are causing greater defamation to Muslims”. Therefore, it asks the Indian Muslim youths to shun all such ‘pseudo-Islamic’ outfits and declares any kind of participation in their activities as Ashad Haram (severely heinous sin in Islam).

Talking to New Age Islam, Maualana Sahabuddin Razvi, General Secretary of All India Tanzeem Ulema-e-Islam and one of the leading cleric of Barelvi tradition said, "India's unity and integrity is under threat. Wahhabism funded by Saudi Arabi and Qatar is spreading its tentacles in the country. In se Desh ke Amn o Salamati  ko khatra hai. (The national security is under threat from these people). We have to take effective measures to contain that." And to that effect he says they will not have any hesitation in collaborating with any other Sunni Sufi organization with which it has some internal differences of opinion. In this context, it should be noted that many Barelwi clerics of AITUI were vehemently opposed to All India Ulema and Mahashaikh Board (AIUMB), another umbrella organisation of heads of the Sufi shrines, when it organised the four-day World Sufi Forum in Delhi in March 2016, which was inaugurated by Prime Minister Narendra Modi. While talking to New Age Islam, AIUMB President said that “the primary aim of the event was to showcase Indian Islam’s co-existence with multiple religions and push it as a counter-narrative against ISIS’s brand of radical ideology. But I am amazed at the naivety of those Sunni Muslims who came all out to oppose this effort merely on the factious grounds”. In fact, the meeting of Syed Muhammad Ashraf Kichauchwi, the founder-president of AIUMB with PM Modi was the bone of contention between the two groups within the Barelvi Ulema, apart from the invitation to the Pakistani-Canadian Islamic scholar Dr Tahirul Qadri as the chief guest speaker.

Interestingly, a close look at the Ulema within the Barelvi tradition reveals that the controversy was more about the personal rivalry for socio-political space. Now it is widely believed that the intended objective of the latest Barelwi fatwa in the anti-terror event at Ram Lila Ground has no different purpose.  Alarmed by the fact with non-representation of Barelwi Muslims in the Indian politics, the event is said to be for some “course correction” to garner political support. But AITUI maintains that this conference had the clear objective of awakening Muslims about the threat of Pakistani terrorism being propagated by radical groups and addressing the issue of radicalization, communal and religious violence and the effective ways to resolve them. AITUI has also made a few formal press statements in this conference that draw attention towards the radicalization of Muslims by Pakistani extremists. 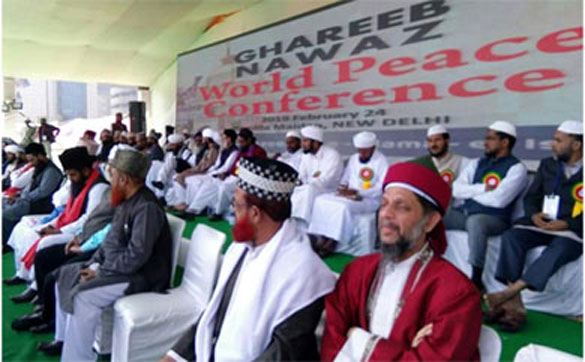 Engineer Shujaat Ali Quadri, official Spokesperson of AITUI, told that AITUI has approximately 10 Lakh members across India and it is an apex organization of Sufi Sunni Muslims of the country. Sufi Sunni Muslims of India are at cross roads today as it is under threat from extremist ideologies, which support terrorism and are misguiding Muslim youth across country. New Age Islam was also informed that the ulema who attended the International Ghareeb Nawaz Conference will draft a detailed memorandum on gist of resolutions passed by the AITUI.

National president of Muslim Students Organization of India (MSO) an a sister organization of the AITUI, Sayyed Muhammad Qadri, strongly spoke on how Muslim youths in India can be prevented from becoming fanatics and how the inculcation of Sufi thoughts in the school curriculums can help in this respect. He said that Indian Muslims seek to establish peace and it is the social and moral duty of Ulema to lead Indian citizens’ fight against radicalization. On the conclusion of the conference, Maulana Ashfaq Qadri appealed to the followers of Aala Hazrat to use social media in a limit as it causes more harm than benefit. The AITUI representatives also demanded the expulsion of the ‘Wahhabi syllabus’ from colleges and universities across the country.