A specialization course titled ‘Islam and Terrorism’ is being introduced by Jamia Razvaiya Manzar-e-Islam Madrasa of Bareily, UP for classical Islamic scholars. The Madrasa says it aims at preparing its students to fight against the terror ideologies and showing them how the terrorist outfits like “ISIS”, Al-Qaeda, Taliban, Boko Haram etc distort the holy scriptures of Islam in order to inculcate hate and prejudice in the young impressionable minds and foment terrorism across the world. A classical Islamic school, Madrasa Jamia Razviya was founded by Aala Hazrat Imam Ahmed Raza Khan Bareilvi in 1904. 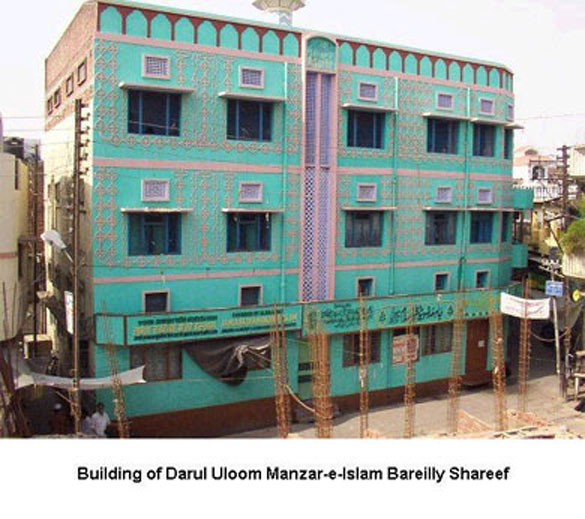 The madrasa has not given any details of its curriculum. Until that comes out, it is difficult to judge, how effective this course will turn out to be. Its efficacy will also depend on the orientation of teachers and their ability and indeed courage to go against established Islamic theology which generally favours political Islam and violence inherent in takfeerism and anti-apostasy laws of the so-called Islamic Sharia.

Though considered Sufi-oriented, even Bareilvi Islamic theological literature is known to promote takfeerism, the practice of calling Muslims of other sects kafir, and violence against so-called apostates. Wahhabi-Salafi Takfeerism is one of the reasons behind terror against non-Salafi-Wahhabi sects like Sufi minded Sunni Muslims, Shias, Ahmadis, etc. The killer of Governor Salman Taseer of Pakistani Punjab, who killed him on the pretext of the latter having called Pakistan's Blasphemy laws black, belonged to and was influenced by a preacher of Bareilvi sect.

The course curriculum and its teaching and impact will, therefore, be keenly watched. It would be important that this course does not turn out to be just another sectarian slugfest, as most Islamist terrorists today belong to the rival Salafi-Wahhabi-ahl-e-Hadees sects. If genuinely counter-terror, this course may go a long way towards not only helping Islamic studies in India, but can prove a beacon of light for Islamic education elsewhere in the world. A genuine counter-terror Islamic theological course is sorely needed.

The course will serve no purpose unless it leads to a genuine introspection on behalf of Bareilvi scholars too. Salfi-Wahhabi ideology's culpability is not in doubt, but Barelvis too need to introspect. Takfeerism cannot be fought with Takfeerism. The theology of hatred, intolerance, exclusivism and violence can only be fought with a genuine theology of peace and pluralism.

However, the very introduction of the course, thus accepting a link between Islamic theology and current terrorist practices of organisations around the world is a welcome need of the hour. This is no less significant than Sheikh Ahmed al-Tayeb, the vice-chancellor of Cairo's University Jamia al-Azhar, recently calling for changing Islamic educational curriculum to fight terrorism, thus admitting a link between current Islamic theology and Islamist terror. Sheikh Ahmed al-Tayeb had called for a radical reform of religious teaching to tackle the spread of Islamic extremism. Speaking in Mecca in a counter-terrorism conference on 23 February 2015, the Grand Imam of Egypt's top Islamic institution had said that a historical misreading of the Holy Quran had led to intolerant interpretations of Islam.

The course is open only to those madrasa students who have completed a two-year specialization course in the Quran and Hadith, namely Fazilat after Aalimiyat. It will give them the chance to compare the original excerpts from the Quran and Hadith to the misquoted, mis-contextualized and distorted versions of Islam propagated by terrorist groups.

The Madrasa says it wants to concentrate in every possible way to curb terrorism. “The terrorist organizations including ‘ISIS’, Al-Qaeda, and Taliban have distorted the teachings of Quran and Hadith and forcibly injected virus into the actual versions of Islam calling for peace in the land” said Mufti Muhammad Salim Noori, a teacher as well as director of this specialized course. He explained to the Press, “The members of these organizations make every possible effort to brainwash the youngsters to join their groups and prepare them for committing merciless acts of terrorism in public places. They do it by misinterpreting and misquoting the original Arabic texts of religious books”.
Mufti Salim Noori added, “In this course, the clerics will enable the students to compare original texts from the Quran and Hadith with the translations made by terror ideologues and guide them to see how the true Message of Islam is being corrupted by these terrorists”.

Mufti Ahsan Raza Qadri, who heads the Madrasa said, “We want our students to get ready for countering the misleading propaganda of these terrorist organizations”.
Maulana Subhan Raza Khan also known as Subhani Miyan, chairperson of dargah Aala Hazrat and the director of this Madrasa, said “Organizations are spreading terrorism in the name of Islam. They are clearly defaming Islam. Therefore, we want to spread the true and peaceful version of Islam through our Madrasa”.

Eight students have already taken admission in this new course but the Madrasa wants to take more students. Muhammad Qamar Raza and Muhammad Ibrahim, two students of this course, said they had passion to find out such a course and know how to spread the true version of Islam. They also said that this course would enable students to refute the terrorist ideologies which are killing innocent civilians and defaming Islam and Muslims around the world.

However, the madrasa has not given any details of its curriculum. Until that comes out, it is difficult to judge, how effective this course will turn out to be. The effectiveness will also depend on the orientation of teachers and their ability and courage to go against established Islamic theology which generally favours political Islam and violence inherent in anti-apostasy laws of the so-called Islamic Sharia etc.

The clerics from the Dargah of Aala Hazrat Imam Ahmed Raza Kahn had already taken a strong step, announcing that if any person associated with any record of terrorism died, his ‘Namaz-e-Janaza’ (funeral prayer) would not be performed.