•        Pakistani media is agog with the news reports and propaganda on what it calls the commemoration of the ‘Martyrdom Week’ or Hafta-e-Shahadat in Jammu & Kashmir.

•        It tends to highlight the 16th martyrdom anniversary of Khawaja Abdul Ghani Lone—who was killed by Hizbul Mujahidin—to manipulate this occasion, twist the facts and incite retaliatory violence.

•        But these media outlets don’t reveal the real culprits and terrorists who crushed down every voice of reason in the valley.

•        Terror groups have orchestrated the killings of moderate voices in the Kashmir—right from Khawaja Abdul Ghani Lone to veteran Kashmiri journalist Syed Shujaat Bukhari to the young lawyer and Sufi practitioner Babar Qadri.

•        Pakistani propagandists in the press have systematically played a pernicious role behind several such ghastly attacks, incidents of brutal violence and fatal terrorism.

•        Islamic concept of ‘martyrdom’ has been indiscriminately misused by the media outlets based in or backed by Pakistan to promote militancy in J&K.

•        A befitting tribute to  Khawaja Abdul Ghani Lone’s soul would be to uphold the cause of education and progression in the valley rather than organise the ‘Martyrdom weeks’. 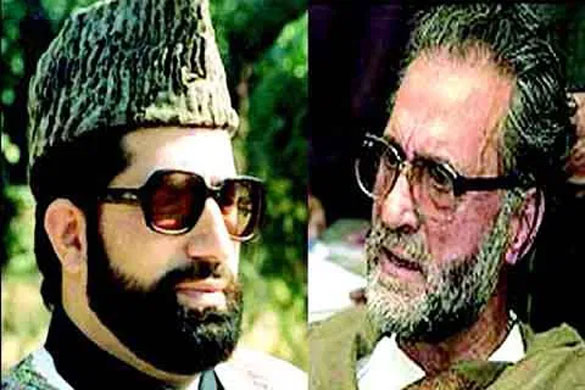 Every year, an occasion called the ‘Martyrdom Week’, also known as ‘Hafta-e-Shuhada’ in Urdu is commemorated from May 18 in the valley of Kashmir in the memory of ‘Shaheed-e-Hurriyat’ Khawaja Abdul Ghani Lone and ‘Shaheed-e-Millat’ Mirwaiz Maulvi Muhammad Farooq. Pakistani media, both print and electronic, is agog today with the news reports and propaganda promoting what it portrays as the commemoration of the ‘Martyrdom Week’ or Hafta-e-Shahadat as an occasion of retribution and vengeance in Jammu & Kashmir.

According to Radio Pakistan, the All Parties Hurriyat Conference (APHC) General Secretary Molvi Bashir Ahmed has appealed to the people to observe complete shutdown on the forthcoming Friday (May 21) to commemorate the martyrdom anniversaries of prominent martyred Hurriyat leaders, Mirwaiz Maulvi Muhammad Farooq and Khawaja Abdul Ghani Lone as well as the martyrs of Hawal.

Roznama Nawa-i-Waqt, an Urdu daily in Pakistan flags in its report dated May 19: “JK Salvation Movement and Voice of Victims have paid rich tributes to Kashmiri martyrs Ab Ghani Bhat, Maulana Muhammad Farooq, Khawaja Abdul Ghani Lone and Hawal martyrs on their martyrdom anniversary and said that their sacrifices will not go in vain….. On the occasion, Qadeer Dar and Rouf Ahmad Khan paid rich tributes to slain leaders and pledged to carry their mission till its logical end.”

Thus, more and more media outlets and Urdu press across the border tend to highlight the 16th martyrdom anniversary of Khawaja Abdul Ghani Lone—who was killed by Hizbul Mujahidin—to manipulate this occasion and twist the facts and  incite retaliatory violence and cross-border terrorism in the valley.

But none of these media outlets would tell the common people in Jammu & Kashmir about the real culprits and terrorists who crushed down every voice of reason in the valley. In 2011, almost two decades after the assassination of the Mirwaiz, a prominent Hurriyat leader, Abdul Ghani Bhatt, admitted that the killing of many Kashmiri leaders, including the Mirwaiz, Abdul Ghani Lone, his own brother Mohammad Bhatt and Professor Wani was the handiwork of terrorists. "Lone sahib, Mirwaiz Farooq and Prof. Wani were not killed by the army or the police. They were targeted by our own people. The story is a long one, but we have, to tell the truth," he said.

Before we proceed ahead, let us take a look at the tragic assassination of Khawaja Abdul Ghani. He was reportedly killed on 21 May 2002 while commemorating the 12th anniversary of the death of another Kashmiri leader, Mirwaiz Maulvi Farooq. Just prior to his death, Lone had a dispute with the separatist leader and Islamist hardliner Syed Ali Shah Geelani. While Lone pushed for the ouster of foreign militants from the Kashmir valley, Geelani had always welcomed and encouraged them. On 21 May 2002, earlier in the day a group of youths arrived at the Eidgah, shouting pro-Pakistan slogans, and two of them fired on Lone and he was shot dead. The then Chief Minister of Jammu and Kashmir Farooq Abdullah expressed deep sorrow over this brutal killing and called it a handiwork of Pakistan. He was on record, saying: "Pakistan wants Kashmir and so is desperate in its action, which this killing has proved." The then Prime Minister of India Atal Bihari Vajpayee was reported to have said: "Mr. Lone was assassinated because he was working for peace in Jammu and Kashmir." Even the US condemned the assassination and Secretary of State Colin Powell issued a statement recognizing Lone as moderate who sought a peaceful resolution of the Kashmir issue.

Thus, Pakistani terror groups orchestrate the killings of the moderate voices in the valley of Kashmir—right from Khawaja Abdul Ghani Lone to veteran Kashmiri journalist Syed Shujaat Bukhari to the young lawyer and Sufi practitioner Babar Qadri—and then the Pakistani media and propagandists commemorate their assassinations as the ‘Martyrdom Week’ inciting the militants to wreak more violence and reiteration in the valley. This is the pernicious role that the Pakistani propagandists in the press have systematically played behind several major ghastly attacks, incidents of brutal violence and fatal terrorism. According to Majid Hyderi, a journalist based in Kashmir, a Pakistan-based terror portal linked to the assassination of journalist Shujaat Bukhari had also targeted Babar Qadri in its hateful and incitary articles. “Interestingly, while the terror portal had posted only one article against Shujaat Bukhari before his assassination, two similar hate pieces had been pitched against Babar back-to-back in June that year”, Hyderi notes. (Source: dailyo.in/politics/babar-qadri-shujaat-bukhari-militancy-kashmir/story/1/33676.html)

Most worryingly, the Islamic concept of ‘martyrdom’ has been most misused in this context. Media outlets based in or backed by Pakistan promote jihadist militancy in Kashmir through proliferation of articles on Islamic martyrdom on occasions like this. They choose to popularize a twisted understanding of this Islamic doctrine by painting the terror incidents like this as the ‘Martyrdom Week’ much in the same way as it promulgates other occasions like Kashmir Solidarity Day (February 5) or the commemoration of an Islamic battle—Ghazwatul Badr known as Jang-e-Badr in Urdu which has been one of the most misused events to incite terror attacks in the valley. With a wilful misinterpretation, the Islamic doctrine of martyrdom is proliferated in the Kashmir valley particularly on occasions like this,  as a call to arms and retaliation.

The proponents of false Islamic martyrdom lure the naïve, underprivileged and gullible Muslim youth in the Kashmir valley and indoctrinate them into believing that martyrdom means serving as human bombs. Such extremist rhetoric of the martyrdom in order to seek false religious  legitimacy for violence and retaliation is not only haram (strongly forbidden) in Islam but also akin to Kufr (infidelity). It goes strictly against the true Islamic principles of reconciliation (Musalahat) during the wars. But the extremist Pakistani propagandists resort to the radical concepts like Shahadat (martyrdom) which is conducive to this predicament, supplemented by the ignorance of separatist Kashmiri leaders who put a poisonous seed in the minds of the youth. In all this brainless rhetoric of retribution, Kashmiri civilians and youths pay the price and bear the brunt.

It was a long-cherished dream of the late Khawaja Abdul Ghani to see Kashmiri people  especially the youth and daughters of the valley being well educated and with a progressive outlook. He used to emphasise Islam’s stress upon pursuing education and acquiring knowledge for the cause of both this world and the hereafter. The most befitting tribute to his soul would be uphold the cause of education and progression in the valley rather than waste energy in organising the ‘Martyrdom weeks’ and taking out rallies and aggressive protests on such occasions.