For centuries, Christians and Muslims have visited the small Syrian town of al-Qaryatain to venerate a saint known as Mar Elian. But in August 2015, the shrine was bulldozed by the group that calls itself Islamic State and the multifaith community was torn apart. 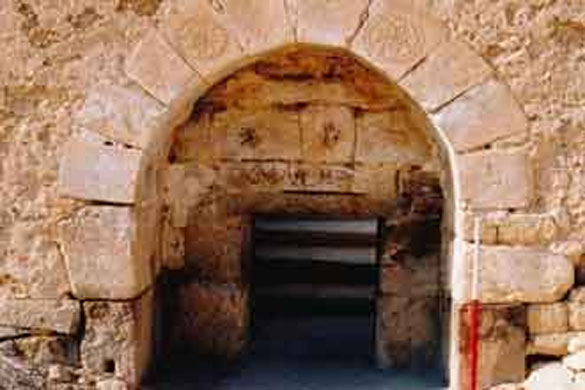 Photo: Inscription from 1419 over the doorway to the monastery

About 1,500 years ago, an elderly and pious man called Julian, from the far east of Mesopotamia, went on a pilgrimage to Jerusalem with his disciples.

As he travelled home, Julian had an inkling that he was going to die before he made it. "If such a fate befalls me," he told his companions, "put my body on an ox cart and set it loose. Where the oxen stop is where I should be buried."

Julian did indeed die, his body was loaded on to the cart, and the oxen plodded on until they came to a stop near a small town. Julian's disciples built a tomb for him and in time a monastery grew up around the shrine.

That at least is the legend of St Julian the Old Man, or, as he is known in Arabic, Mar Elian.

What's certainly true is that Mar Elian's shrine has existed since at least the 6th Century, near the remote town of al-Qaryatain, located in the desert between Damascus and Palmyra.

Mar Elian is not only venerated as a saint by Christians, however.

The local Sunni population regard him as a Sufi leader and call him Sheikh Ahmed Ghouri ("ghouri" means "priest"). Until its destruction last year, Mar Elian's sarcophagus was draped in green satin, a traditional mark of homage to a Sufi holy man.

When the British archaeologist, Emma Loosley, travelled to al-Qaryatain 15 years ago to excavate and redevelop the monastery she found the tumbledown ruins of the original complex, a run-down church from the 1930s and a friendly priest - Father Jacques Murad - who immediately decamped to a house in a nearby village.

"We couldn't cause any scandal by sleeping in the same place," she says.

Men on ladders repair a tower in the complexImage copyrightEmma Loosley

"That meant I was the only permanent resident of the monastery at that point, and I had to live in this half-ruined mud-brick tower in the corner of the cloister.

"Our shower was tainted because the well had sulphur, so I used to smell like rotten eggs every time I washed."

But the Qurwani, the people of al-Qaryatain, made up for the grotty living conditions. Loosley found the remote desert community to be remarkably open-hearted and tolerant. They even had a myth to explain why Sunni Muslims and Christians - who accounted for about a fifth of the population in 2001 - lived together so harmoniously.

"Their belief is that there were two tribes living in this place," says Loosley.

"With the coming of Islam, the tribes got together and they decided that one tribe would stay Christian and that the other one would try the new religion.

"Then they had a pact that whichever religion became dominant, they would look after their brothers who stayed in the minority religion." 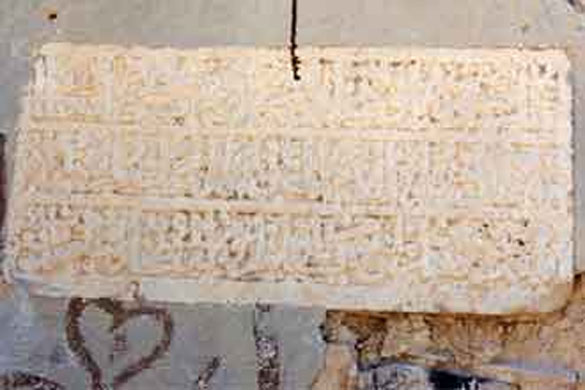 Photo: Inscription from 1419 over the doorway to the monastery.

This idea that the Sunni Qurwani felt a responsibility to their Christian neighbours is apparently borne out by an inscription dating from the 15th Century, carved in limestone above the monastery door.

No-one in the town can read the old ornamental calligraphy, but the oral tradition says it states the shrine was under the protection of the local ruler, Emir Sayfudullah. If anyone dared to harass the pilgrims, Christian or Muslim, they would have to deal with him.

The tomb of Mar Elian was made of stone adorned with simple circular patterns. But there were also scrawls of Arabic and even a Star of David - pilgrimage graffiti left by generations of devotees.

Every year, Christians and Muslims participated together in the festival of Mar Elian, held on 9 September. Eid Mar Elian was one of the big regional feasts, and thousands of people from villages and towns across the Syrian Desert descended on tiny al-Qaryatain for a day of processions, prayer and partying.

The town's remote location meant something like normal life continued long after much of Syria descended into violence after the uprising of 2011.

Slowly, though, the monastery's grounds began to fill with tents. Internally displaced Syrians - Muslims and Christians - had lost their homes in Homs, Palmyra and Damascus and had come to the monastery of Mar Elian for sanctuary.

Then, in May 2015, the group calling itself Islamic State captured al-Qaryatain. Seven or eight IS fighters arrived at Mar Elian monastery, blindfolded and handcuffed Father Jacques, and took him away in the monastery car, along with a deacon called Botros.

The clergymen were missing, presumed dead. But actually they were taken to Raqqa, the Islamic State's de-facto capital, and locked inside a bathroom.

"It was to humiliate us," says Father Jacques.

"It was deliberately to show as Christians we are less than them.

"But actually we were fine! We had a private bathroom. We took advantage of being locked in so we were showering two or three times a day. It was really, really hot, and there was no fresh air so that was what kept us cool.

"While I was in Raqqa I didn't know anything going on outside of the bathroom. We had no news at all. I tried to keep calm. I thought about my family, my friends and I felt it was a time to give thanks, because I have had a lovely life.

"So I was thanking God for the life I've had, and I felt ready to accept the end of my life."

Eventually, the two prisoners were moved again, to Palmyra, where Father Jacques was reunited with about 250 of his parishioners.

Men, women and children were kept together in a prison for a further three weeks, before being shipped back to al-Qaryatain in September 2015 to live under IS's diktat.

It was at this point that Father Jacques discovered the fate of the monastery to which he had dedicated his life.

"I had already prepared myself that Mar Elian would be gone," he says. "But when I came to the site and stood in front of the ruin I felt numb. It was devastating."

The 1,500-year-old monastery had been bulldozed. Loosley's excavations, the 1930s chapel, the sarcophagus of the saint himself - it was just a pile of rubble.

The saint's bones were crushed, but that didn't stop Father Jacques and his congregation from commemorating him in the festival that bears his name. There was no procession, no speeches, no public feast - just a mass held in a basement. It was the first Eid Mar Elian that the Muslim population had not celebrated.

"We actually managed to celebrate mass a few times in secret," says Father Jacques. "And I felt we were like the first Christians, exactly like the very first Christians - we had to hide away so that no-one knew we were doing this."

Father Jacques says that as long as he remained in al-Qaryatain, his flock would also feel they had to stay. So he slipped away, by dressing up as an Islamist and riding away on a motorbike with the help of a Muslim friend.

There is now no shrine, and no Christians left in the little town in the desert.

The Museum of Lost Objects traces the stories of 10 antiquities or ancient sites that have been destroyed or looted in Iraq and Syria.