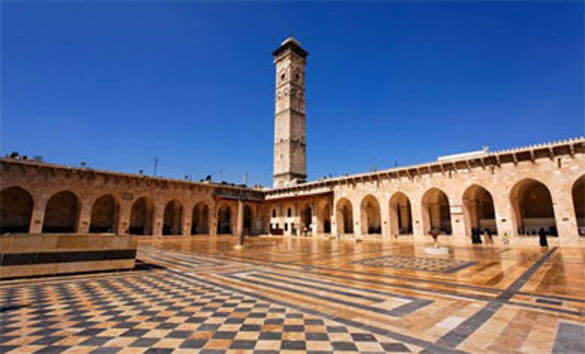 For nearly 1,000 years the minaret of the Great Mosque of Aleppo soared above Syria's largest city. But it now lies in ruins - one of the many victims of Syria's civil war.

The minaret of Aleppo's Great Mosque was unusual - unlike traditional cylindrical minarets, it was square in cross-section. At 45m high, its pinkish-beige stone, wrapped in intricate Arabic inscriptions, stood out on the city's skyline.

It tells the story of Aleppo - or Halab as it's called in Arabic - one of the oldest continuously inhabited cities in the world.

The mosque was said to hold the remains of John the Baptist's father, Zechariah. Founded in the early 8th Century, it endured the sackings of the city by the Fatimids, Abbasids, Byzantines, Armenians, and Mongols - and even an earthquake.

"When you enter the courtyard, somehow the air changes," says Syrian artist and archaeologist, Zahed Tajeddin, who was born in Aleppo and is now based in London.

"It's purer, cleaner and you are concealed from the hustle, the traffic, the noise and it's open to the blue sky over your head. There's some kind of calm, serenity, peace. And of course the mosque itself doesn't have a great dome; it had the minaret... standing in the corner of the courtyard. It was quite a striking image."

The minaret was nearly 1,000 years old when it was turned to rubble in the spring of 2013 - Syrian government forces and rebels blame each other for the destruction.

"The minaret was somewhat incongruent with the rest of the mosque. It was totally out of proportion for it, it was much larger, so it actually drew attention to itself," says Nasser Rabbat, a Syrian art historian at the Massachusetts Institute of Technology.

"I think the mosque has lost its bearing by losing that minaret."

The column had four different sections, each decorated separately over many years.

"It was started by a Shia and it ended with a Turkic ruler of the city who was Sunni. This encapsulates the changing history of the city because at the time the Sunnis were coming back and reviving the presence of Sunnism in Syria, and the Shias were retreating."

This was in the 11th Century, when Turkic invaders were coming into the Middle East from the steppes of Central Asia.

"There is a bubbling energy that is coming into the country, with the arrival of the Turks," says Rabbat. The minaret "seems to have been some sort of a monument that was planted in the mosque in order to assert the coming of a new age".

The Arabic inscriptions that adorned the walls were in two different styles of writing, he notes.

Near the bottom the words appeared in the old Kufic script - the letters were wide and blocky. Higher up, on sections built later, the inscriptions were in modern cursive script.

"The change in writing is symbolic," says Rabbat.

"The cursive is much easier to read and it is usually taken as an attempt at saying religion is easy to understand by all, you don't need any kind of esoteric knowledge or higher knowledge to be able to understand it."

The mosque and its minaret were surrounded by the constant thrum of activity. The entrance lay through the Aleppo souk - the bustling heart of the Old City, with lines of closely-packed streets, shops, and caravanserais.

"People have lived there for almost the entire time of human history. They have shopped, traded, made things, and they have socialised there," says Heghnar Watenpaugh, a Lebanese-Armenian historian who used to live and work in Aleppo. "When you enter that space you are walking in the footsteps of the most ancient humans, so it's a very special area."

"You get the sense that you're in the city but also not in the city… You can discover the most exotic products and also the most mundane - from sheep's heads to rare silks from the Orient."

It was under the reign of the Ottomans in the 16th and 17th Centuries, in particular, that the souk developed its famous character. European, Indian and Persian travellers, merchants, and diplomats would often stay in the bazaar, where they would enjoy the frenetic whirl of people and animals, holy men and drunks.

"During the day it was a centre of commerce but at night it became a very different kind of space," says Watenpaugh. "Dancing girls and dancing boys would come out; there would be alcohol as well as opium. And a lot of these merchant communities would compete with each other to have parties at night.

"One of the French consuls recalls that for the birthday of one of the King Louis of France, they would have these big parties where they aimed to dazzle their fellow merchants - of course all to the glory of the king but also to have lots of fun."

Today, the whole area is a battleground. When Aleppo was dragged into the war, it was reported that one of the rebels' entry points into the Old City was through the souk. The souk became a stronghold for them, and in September 2012 it was engulfed in an enormous fire and largely destroyed.

"The Rebels had strung up big sheets over some of the windows to give them cover…they would have mirrors they'd point at round the corner so they could look back down the street without having to put their head out but in many cases these mirrors were cracked from being shot at.

"The regime punched holes through the souk walls… we had to run as fast as possible across those. I got shot at and the sniper was 10m away. At that point I felt my heart was going to jump out of my flak vest."

Through the souk the rebels also had access to the minaret - and this too was fiercely fought over. It's believed to have changed hands numerous times. According to some reports, the top of the tower was used as a sniper post, and the bottom filled with ammunition supplies. Some accounts say rebels controlled it when it was destroyed, apparently hit by government shelling - but this is disputed.

For Nasser Rabat the minaret is "one of the victims of this blind, crazy violent, totally irrational war". It's a symbol he always makes a point of putting in context.

"We have more than 250,000 documented dead individuals in Syria and the destruction of the country. Not just a minaret," he says.

Aleppo has recovered from numerous invasions and bloody wars - and it's believed that the stones of the minaret have been gathered and moved to a safe place, so that one day, perhaps, they can be put back where they belong.