Suicide Terrorism In Pakistan: Howcan An Ideology Justify For A Person To Enter A Church And Blow Himself Up In The Midst Of Innocent Men, Women And Children?

Have you ever wondered what conviction is needed for a person to enter a church and blow himself up in the midst of innocent men, women and children? How can an ideology justify this and where do we come across such people? It boggles the mind to understand the psychology of suicide bombings and the ease with which one takes the life of the other in the name of faith. 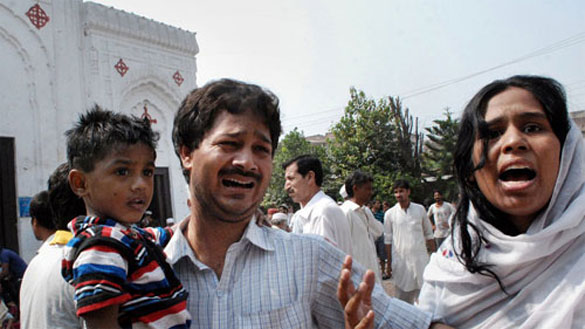 But that’s not all. Equally puzzling is the mentality that justifies this on the grounds that because these people have suffered themselves, therefore they are liable to act in the manner they do. There are many among us who defend the actions that are taken, giving the suicide bombers space and shelter, knowing full well that the targets of these persons will be fellow Pakistanis.

Peshawar on Sunday witnessed the worst attack on Christians in Pakistan’s history. Nearly a hundred people died as two suicide bombers detonated themselves within the All Saints Church. This is the first such attack to take place on this scale against the Christian community, or for that matter, against any religious minority in Khyber-Pakhtunkhwa province. Given how much violence that the province has seen in the past decade, one would have assumed that such incidents against religious minorities are commonplace in K-P. That is not the case.

That is what makes this attack unique. Imran Khan, however, argues that this is the 210th such attack in K-P and the second major one after the Meena Bazar bombing. He also condemns not those who carried out the attack but those parties who he says played politics after the attack which resulted in protests in the city. It’s a strange stand to take at a time of a crisis of such magnitude.

Where do we go from here? This isn’t only about Christians or religious minorities. Our soldiers and officers of the army have also been attacked and killed as have members of the Frontier Constabulary and the brave police force of K-P, which continues to battle on despite all the odds. This is in addition to the thousands of civilians who have died many of them not even remotely connected to the war against militancy.

Pakistanis are dying in large numbers, mostly at the hands of religious militants who insist that their war is with America and not with us. One does not understand the logic of this. But it is an ideology that finds favour with many. It is equally puzzling to see some leaders in our midst cry themselves hoarse over drone deaths but remain quiet on the deaths of all other Pakistanis. Why is the life of one Pakistani dearer over another? Is this not hypocrisy?

In K-P, the double standards are having an effect. The militants are now tightening the noose especially in areas where the army said it was now withdrawing in favour of the civilian administration. Members who have opposed the militants are being targeted. And the government is looking the other way, as if it does not want to know.

This is a depressing scenario for all. Today K-P, tomorrow the rest of Pakistan. Lahore cannot live in isolation. What does one see ahead? In all probability, more violence not peace. Maybe because we have held on to the wrong end of the stick.

Can we continue to talk about peace when we are seeing no response from the other side? We blame one group or another, some insisting that these splinter groups are conducting these attacks to sabotage the elusive talks. But where is the state in all this. Do we strive for peace and let others wreak havoc on us as a result?

Whatever happened to the terrorism policy that the government was devising? All we know is while our people are dying, the government has decided to talk and not fight. What we don’t know is who we are talking to, what we are saying and what are the objectives for these talks. The other side is the one laying down the conditions. We do better than this in our negotiations with the IMF. One fears that the talks are a farce and that the other side is buying time. If that is the case, we will have no one to blame but ourselves for what lies ahead.