THE woman in a full-length Burqa walked calmly into the drab government office. She moved close to the desk behind which an administrator was shuffling his papers. Others queued around her. Suddenly, without warning, she detonated the suicide vest she was wearing. The explosion flashed a brilliant white on the grainy CCTV before the cameras cut out, obliterating everything – and everyone – in the room. 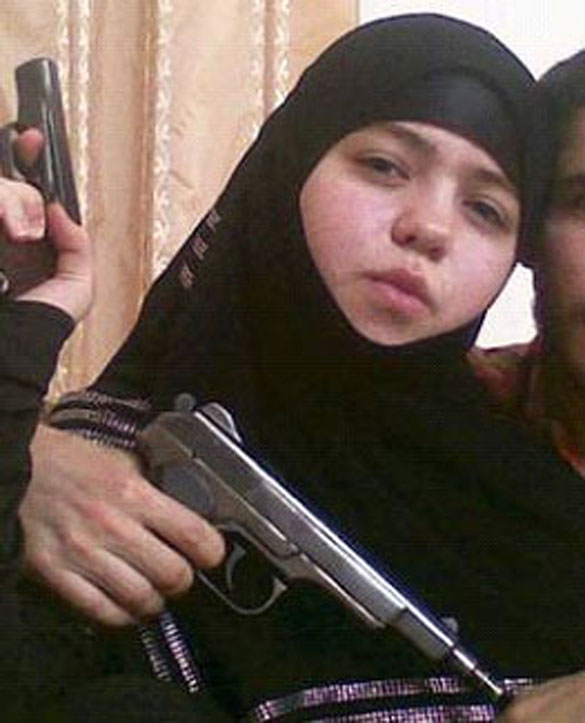 Dzhennet Abdurakhmanova, one of the so-called black widows who blew themselves up on the Moscow subway in March 29, 2010, killing 39 people

I was shown this horrifying footage on a training course in advance of a trip to Helmand Province last year. The message was simple: there are no rules of engagement; the attacks can come at any time and from anyone. And the changing face of terrorism has become all too clear amid the rubble of Nairobi's Westgate shopping mall, where last Saturday al-Shabaab militants stormed the building and murdered at least 67 people of all creeds and colour.

The estimated 10 to 15 fighters reportedly killed hostages using guns, knives and bombs over the four-day siege.

Witnesses have described a "pale-skinned woman" issuing orders and firing at hostages. In the chaos that has followed, nobody has been able to verify the claims.

But what we do know is that British terrorist suspect Samantha Lewthwaite, a 29-year-old soldier's daughter from Buckinghamshire, is now one of the most wanted women in the world.

On Thursday, an international arrest warrant for Irish-born Lewthwaite, known as the "White Widow", was circulated in 190 countries at Kenya's request. The Interpol Red Notice specifies that Lewthwaite is wanted only in connection with her alleged role in a plot to bomb hotels in Mombasa in December 2011. Whether or not she had anything to do with the Westgate attacks has yet to be determined.

Lewthwaite, who was born in Banbridge, Co Down, converted to Islam at 15, after developing a crush on a Muslim boy. Later she married Germaine Lindsay, one of the 7/7 London suicide bombers. Following that attack, she disappeared abroad with her three children. After spells in South Africa and Kenya, she is now believed to be based in Somalia, the heartland of al-Shabaab.

The images released by Interpol of Lewthwaite in full make-up, shrouded in a black headscarf, or staring up from a false South African passport, still have the power to shock, even if we have become used to women initiating acts of terror. Al-Qa'ida and other terrorist groups recognise the value of recruiting women as jihadists.

Anatol Lieven, a professor in war studies at King's College London, recalls a conversation with Pakistani cleric Abdul Rashid Ghazi, who led a madrasa – an Islamic school – for women in Islamabad's hard-line Red Mosque shortly before he was killed in a siege in 2007. "He told me: 'If you convert a man, you convert one man. If you convert a woman, you convert an entire family'."

Iraq has provided one of the bloodiest examples of Islamist groups casting their recruitment net further. In 2008, the number of female bombers in the country increased dramatically. At least 36 female suicide bombers attempted attacks, compared with eight the previous year.

These, then, are recent developments, but as Dr Mia Bloom, professor of security studies at the University of Massachusetts and a world leader in the subject, says: "Women involved in terrorism is not a new phenomenon."

In 1877, Russian anarchist Vera Zasulich, who was on trial for the attempted assassination of the governor-general of St Petersburg, declared to the court: "I'm not a murderer. I'm a terrorist."

In modern times, Gudrun Ensslin and Ulrike Meinhof (alongside Andreas Baader) were the unlikely middle-class leaders of the Baader-Meinhof gang that waged attacks and assassinations on the German state in the 1960s and 1970s.

SOME of the IRA's staunchest fighters were women. In Belfast, in 1971, three young Scottish soldiers, brothers John and Joseph McCaig and Dougald McCaughey, were lured to their deaths in a "honey trap".

Their killers have never been found. Mairead Farrell was a key member of the Provisional IRA and one of three killed by the SAS in Gibraltar in 1988 days before a planned attempt to bomb an army parade.

Only last year, the Old Bailey bomber Dolours Price declared: "I should be ashamed to admit there was fun in it in those days."

The 62-year-old and her sister Marian were part of an IRA unit that planted four bombs outside the courts in 1973 in an attack that left one man dead and 200 injured. She died in January this year.

More recently we have seen female commanders rise to prominence in the Basque separatist group ETA.

And in 1991, India's former Prime Minister Rajiv Gandhi was assassinated by a female Sri Lankan suicide bomber who hid the explosives in a basket of flowers.

Since 2002, young "Black Widows" from the North Caucuses have massacred hundreds of Russian civilians in attacks on Moscow.

Dr Bloom, who interviewed female jihadists and former IRA members for her book 'Bombshell: Women and Terrorism', published in 2011, says: "The change we have seen over the past 10 years is that women are starting to be used in these very instrumental ways.

"Because the leaders of these organisations understand their communities very well, they use women to manipulate men to say: 'If you are not fighting then you are hiding behind women.' These women are becoming celebrities in their communities."

Dr Bloom boils down the motivation to "redemption, revenge, respect, relationship and rape".

In the North Caucasus region of Dagestan, an area plagued by female suicide bomb attacks, the belief is that women become involved after their husbands are killed by Russian special agents or if they have been "hypnotised" by Islamic extremists.

But for Dr Caron Gentry, a lecturer at St Andrew's School of International Relations, who specialises in gender and terrorism in the 1960s, this is too simplistic a view: "We are still beholden to the idea that women are not political creatures and are not violent. We still believe these ancient notions that women are passive."

The recent case of Roshonora Choudhry, the bright, 21-year-old English student who went from volunteering as a learning mentor at West Ham United FC to stabbing the British MP Stephen Timms, shows that the motivation of a terrorist – regardless of gender – remains for many beyond the realms of comprehension.

Choudhry transformed in six months from a moderate Muslim to somebody prepared to kill, after becoming self-radicalised while sitting at home on her computer listening to extremist sermons.

In May 2010, this "pleasant and well-behaved" straight-A student, from a close family in East Ham, bought two kitchen knives, emptied her bank accounts and made an appointment to see Mr Timms – who had voted in favour of the Iraq war – at his surgery.

She smiled as she approached, held out a hand in greeting, then pulled the blade out of her bag and thrust it twice into his stomach.

When asked why she wanted to kill Mr Timms, there was no bold declaration like that from the Russian anarchist a century ago. Instead, she uttered one word: "Punishment." (© Daily Telegraph, London)