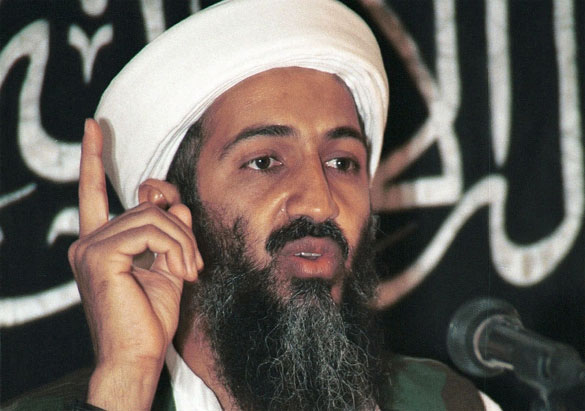 Osama bin Laden predicted the demise of the Islamic State (IS), warning before his death that any effort by jihadists to declare a caliphate before defeating the West would be doomed to fail.

The insight is one of several emerging from 113 newly declassified documents, part of a trove found by U.S. Navy SEALs during the 2011 raid on bin Laden's compound in Abbottabad, Pakistan, in which the al Qaida leader was killed.

Written in Arabic and translated by U.S. intelligence, the notes and letters portray a hands-on administrator who had grown increasingly paranoid while struggling to keep the terror organization he founded from falling apart.

“The movement is nothing like unified. It disagrees with itself all the time,” a senior U.S. intelligence official said of the documents, most of which date from 2009 to 2011. “You got to see the mess it was behind the scenes.”

One of the biggest struggles was the growing schism between al Qaida’s central leadership and that of al Qaida in Iraq (AQI), the forerunner to the IS terror group, which was already expressing the strong desire to declare the establishment of an Islamic Caliphate before defeating the U.S. and the West.

“Bin Laden argues not only is it illegitimate to do it this way… but if it’s done in this order it will fail,” the official said.

“We should realize by now that in order to establish an Islamic State, we should destroy the international infidels because they are against an Islamic State no matter how little it is,” bin Laden wrote in a letter addressed to Abu Basir, an alias for Nasir al Wahayshi, the leader of al Qaida in the Arabian Peninsula.

“It would fail because it had not earned popular support,” the official added. “He’s very critical of AQI attacking locals.”

“They were very strident about not declaring an Islamic state, particularly if you could not hold territory and provide for people,” the official said.

Among other concerns was whether mujahideen could “bear the burden of running a country,” the officials said, adding bin Laden had come to the conclusion that they could not.

And while bin Laden clearly foresaw a time when there would be an Islamic caliphate, his letters and notes provide little to indicate he saw himself playing a vital role.

“Bin Laden never made reference to or indicated at any point that he would lead anything once this was over,” a senior intelligence official said. “He saw himself as a visionary.”

The documents released Tuesday also show Osama bin Laden had become increasingly paranoid and restless while in hiding in Pakistan.

In one instance, bin Laden, writing under the pseudonym Abu Abdallah, worried the U.S. might have followed his wife's visit to a dentist in Iran, and possibly implanted a tracking chip in a filling.

"The size of the chip is about the length of a grain of wheat and the width of a fine piece of vermicelli," he wrote. At the end of the note, he instructed: "Please destroy this letter after reading it."

In another instance, the al Qaida leader expressed concern that a tracking device might have been placed in a suitcase filled with cash in a ransom exchange for an Afghan prisoner who al-Qaida was holding.

"It is important to get rid of the suitcase in which the funds are delivered, due to the possibility of it having a tracking chip in it," bin Laden wrote in a letter to an aide identified only as "Shaykh Mahmud."

Worried about U.S. drones tracking al-Qaida activities, bin Laden told al-Qaida fighters they should not leave their rented house in the Pakistani city of Peshawar, "except on a cloudy overcast day."

An undated, unsigned document admitted that al-Qaida had executed four would-be volunteers on suspicion of spying, only to realize later they were probably innocent. "I did not mention this to justify what has happened," the writer said, adding, "We are in an intelligence battle, and humans are humans and no one is infallible."

It also appears that despite bin Laden’s hands-on management style, he was also increasingly out of touch “with his organization’s capabilities” according to senior intelligence officials, even looking for pilots to carry out more attacks like the September 11, 2001 attacks on New York and Washington that killed more than 3,000 people.

At the time, officials say, al Qaida was struggling to house and feed recruits, and even to get them into the fight.

U.S. intelligence officials say one of the oldest documents released Tuesday was a hand-written will, dating to the time when the al Qaida founder lived in Sudan, between 1991 and 1996.

In it, he claims to have about $29 million in personal wealth, most of which he wanted spent "on jihad, for the sake of Allah."

The U.S. intelligence community released a first set of 103 declassified documents, as well as a list of English-language books that the terror mastermind had at his compound, in May 2015.

Jeff Seldin works out of VOA’s Washington headquarters and is national security correspondent.