President Abdullah Gül has issued a stark warning over the turmoil across the Middle East, saying ethnic and sectarian identity politics could presage an era of medieval darkness across the Muslim world similar to Europe’s Middle Ages. 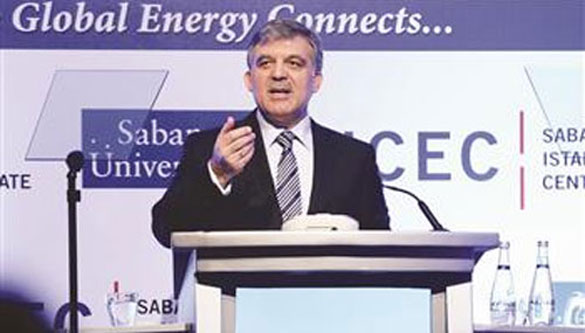 Speaking at the Istanbul Forum organized by the Centre for Strategic Communication (STRATİM) on Oct. 4, Gül warned against the possibility of a clash “within civilizations” that will be more detrimental than a clash of civilizations in the Middle East, describing it as a doomsday scenario.

Gül said the Middle Eastern region faces two scenarios. “The first one is, as it happens in all big transformation processes, the scenario where internal and external factors weigh in with policies based on power balances and the perception of geopolitical interests is followed,” he said, adding that this precipitated a conflicted understanding based on geopolitics that is reinforced by ethnic and sectarian identity politics which will usher in a period of medieval darkness in the region.

“There is no possibility or probability that any country, sect, or community can come out beneficially from such a period. In other words, this scenario will lead to a ‘clash within the civilization’ that will be more detrimental than a ‘clash of civilizations’ [and] is the disaster scenario where everybody loses,” Gül told an audience that included participants from Syria, Egypt, Iran, Russia and the European Union.

The second scenario, however, is the one that rejects ethnic and sectarian identity politics that are based on shallow geopolitical interests. “We all know about the economic integration and security architecture that was implemented by Europe upon the lessons it drew from war and conflicts. Nations living in the East as well can transform their region into a space of peace, stability and welfare by meeting along common values and interests,” said Gül.

Syria Stuck Between Baath and Extremists

Gül said the crisis in Syria had become stuck between the Baath regime and extremist elements and that this was prolonging the civil war in the neighbouring country.

The president also warned actors not to repeat the same mistakes of the Geneva Conference last year, known as Geneva I, the multinational meeting that was aimed at solving the Syrian crisis, which is now expected to be followed by Geneva II in mid-November. Geneva I failed because it neither had a sanctioning mechanism nor a transition process tied to a concrete timetable and modalities, according to Gül.

While expressing satisfaction about the possibility of holding a new round of discussion about Syria, Gül said: “Past mistakes should not be repeated by avoiding diplomatic ambiguities. The fundamental parameters are that many international actors, including Turkey, agree on the fact that there should be a new administration in Syria after all the bloodshed.”

Such a case of affairs will only emerge from a solution-based perspective that includes a sanctioning mechanism that will force the Syrian government to abide by the modalities of the transition process, according to Gül.

The Turkish president also said an exit strategy from the Syrian ordeal should involve joint work by the Arab republic’s neighbours in addition to the efforts of the permanent members of the Security Council. Recalling that he initiated a process when he was the foreign minister that brought together Iraq’s neighbours to discuss the crisis in the war-torn country, Gül said a similar set-up could be established in Syria as well.

Gül also touched upon Egypt, saying the country had a critical place for the entire Middle East.

“Democracy was suspended in this country, and we believe Egyptians will overcome this problem,” he said, adding that instability in Egypt would have consequences going beyond the region. “The strong relations between Turkey and Egypt will overcome problems stemming from a divergence of views between the two countries.”

‘Not Even Islamists Look At The AKP As A Model’

Meanwhile, an Egyptian fellow at Yale University, Mohamed Elfayoumy, said both Islamists and non-Islamists in Egypt were looking at Turkey’s ruling Justice and Development Party (AKP) as just another chapter in an Islamic project rather than a model that integrates the Islamic movement with secularism.

While Turkey was seen as a model in the early days of the revolution that ousted President Hosni Mubarak in 2011, this has now changed, said Elfayoumy.

Other panellists at the Istanbul Forum also expressed pessimism as to the near future of Egypt, emphasizing that any political initiative would come into conflict with the military, which does not want to rule, but yet which also does not want to relinquish power.

Civil-military relations need to be reformed, according to Elfayoumy, who added that the Muslim Brotherhood needed to revise its ideology.

Elfayoumy, a former Egyptian diplomat, said he voted for Mohamed Morsi for president, but then joined millions that took to the street, demanding his resignation. The brotherhood failed to respect the revolution itself by marginalizing and alienating millions, he said.

Other panellists joined Elfayoumy in criticizing the brotherhood in failing to tackle challenges, especially the high presence of the army in local governance and the economy.

“The army does not want to lose the ability to remain in control and prevent change,” said Yezid Sayigh from the Carnegie Middle East Centre, adding that he did not believe any movement bent on implementing change would not collide with the military.

Meanwhile, Yaşar Yakış, a former foreign minister and Turkish envoy to Cairo, said any attempt to sideline the brotherhood would be unlikely to succeed.