‘There Are Taliban Ahead’

I have never felt so out of place, even when I am not in Pakistan. We were driving on the road next to the famous smuggler’s market of Peshawar. I was accompanied by my wife and two other friends, a boy and a girl. There were barely any women on the streets, though that isn’t particularly shocking to someone who has grown up in Pakistan. A few that were there were covered in the Afghani Burqa. But even if there hadn’t been any women with us, my male friend and I would have remained an oddity in this environment. We stuck out with our jeans and T-shirts. For the first time in my life I felt vulnerable solely on the basis of what I was wearing. Around us were all Pakhtun men, wearing Shalwar Kameez and sporting beards. We were both Punjabis and our wheatish complexions highlighted the fact that we were aliens This could have been some kind of primordial reaction to the ‘other’ based on some kind of borderline xenophobia, or the feeling of danger could have been entirely real, but such is the make-up of modern day Pakistan that it is now hard to tell the difference between the two. 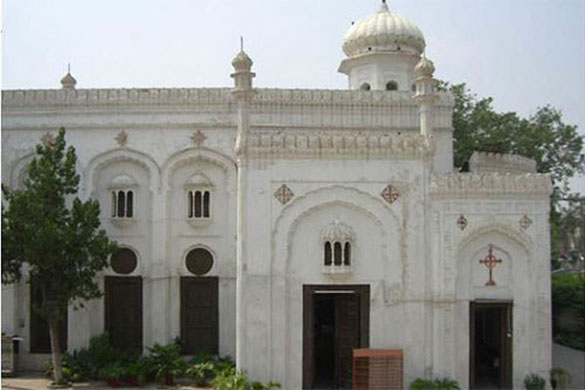 More than exploring the ancient city of Peshawar, I think all of us had wanted to prove to ourselves that we had not bought into the stereotype of Peshawar being a dangerous city. Other tourists might have stopped coming here but we weren’t like other tourists. We believed superficially that nothing would happen but the truth was that when we were on the road and everyone around us stared at us, we wondered if our bravado might have been a little foolish. 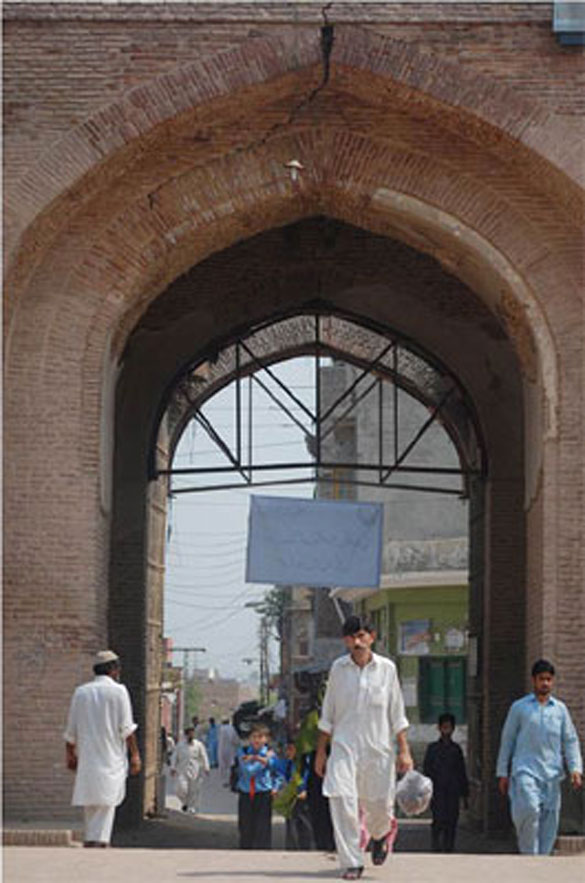 Always up for an adventure my wife wanted to get out into the market and even maybe buy something from this fabled smuggler’s market. I was tempted but reluctant. In fact all of us besides Anam (my wife) decided that it would be a better idea to just drive through. 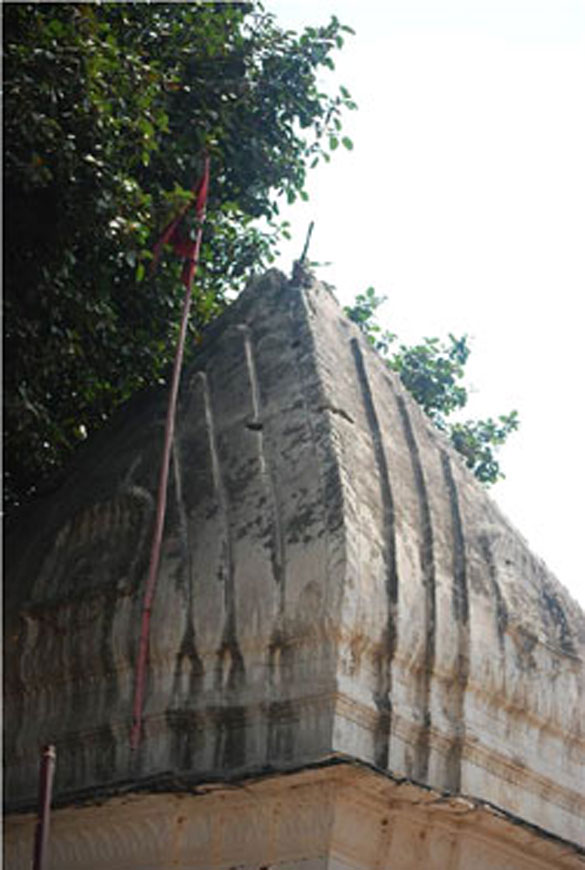 The Hindu temple at Ghor Katri

We crossed a Ranger’s barrier. They were stopping trucks loaded with goods being exported to Afghanistan. As I tried to pass through a guard came running after us and tapped on the car’s trunk with his stick, asking us to stop.

He said something in Pashtu.

“Where are you going?” he asked.

“Don’t go there,” he said pointing to the road in front of us. “It’s dangerous.”

Without waiting for any other explanation I was willing to turn the car back towards the city. “Let’s ask him what the danger is though?” urged Ammar, my friend accompanying us.

“Taliban,” was the one word answer we got from the Ranger.

That was when it hit me, we were in a place where the Taliban was not a concept but rather a reality. There was fear in the air. I could understand why the new provincial and federal governments were so eager to arrange peace talk with the militants, even if from a position of weakness. No matter what ideological stand one took, the gruesome reality of people being bombed to death every day was simply too horrific to deal with.

We were now driving on the Mall road heading towards the Qissa Khawani Bazaar. The Ranger’s warning had scared us. I wasn’t sure if I wanted to get off at any point. It was enough to complete this rite of passage by just driving around the city. I suddenly felt very awkward and privileged; almost like a foreigner surveying a disaster zone on television and tut tutting at it from the comfort of my living room. We passed an army barricade and were now in the sanctuary of Peshawar Cantonment. Despite my political differences with the institution of the army, it was still a relief to be here.

Anam pointed towards a white building on our right with a dome on the top that looked like a Gurdwara. “Let’s go there,” she suggested. “I think that’s a Gurdwara.”

“That’s not a Gurdwara,” I said. “It follows the architecture of Gurudwaras but is not one. I can tell a Gurdwara or a Mandir when I see one.”

One day later when we had safely returned to our home in Islamabad we learned that the building we had been discussing the day before was the All Saints Church that was bombed by militants a day after our return.

We drove through the Qissa Khawani Bazaar and were heading towards Ghor Katri, believed to be the oldest part of this historical city. This was the walled city and hence the streets were narrow and there were shops on both sides. There were beautiful wooden balconies on the top. A lot of Peshawar’s ancient history has been protected within the walled city, unlike that of Lahore. I felt at ease here, protected by the history of this place and my imagination of what this city must have been once. I imagined traders from all over, Persia, Central Asia, China and India, converging on this metropolitan city. Stories were exchanged here and ideas shared. In the night there were brothels and bars for these merchants to visit. Now it was all a memory.

We passed the clock tower that was constructed after the First World War to honor the soldiers that fought in the British army in the far away cold regions of Europe. In front of us was the imposing entry into Ghor Katri. There was a gateway beyond which was the garden.

We drove into the complex. The archaeological digs constructed by Dr. Dani, the famous Pakistani archaeologist were on one side of us, recording the various layers of civilization that existed in Peshawar way back to antiquity. In front of us was a Hindu temple, protected by a thick wall. There was a colourful Om painted on the face of the building. It was clear that the temple was still being used but the entryway was locked. There were students and other men sitting around the gardens of the complex, but as is ever the case in Pakistan, no women in sight.

We walked to the office of Archaeology in the complex where we met a young man sitting behind a table reading a book. I introduced myself and my friends and he was more than happy to tell us about the history of this region. We were told that a few years ago on the request of the Hindu minority of the city the temple was allotted to them and that now every evening a few Hindus gather there for prayers. Several more arrive on the occasion of religious festivals.

There are thousands of Hindus living in Peshawar in relative peace and ever since partition the Hindu community has enjoyed a friendly environment here. This is in sharp contrast to the Hindus in the cities of Punjab, where they are demonised in every possible manner.

“No,” he said. “I did so under the pressure of my father. He was working in the department and wanted me to follow in his footsteps. I wanted to be a Computer Engineer.”

This was a reverse case of parental pressure, where a “safe” field was abandoned for an “unsafe” field.

“Can you tell me the way to Baba Rehman’s tomb?” I asked the guide. “Sure,” he said, “but I won’t advise you to go there. It is dangerous. There are some locals there who do not approve of the practices at the shrine.”

“Are there any Taliban there?” asked Ammar.

“There are no Taliban. All of them are agents working for the government,” shouted another person standing next to us.

This time when we returned to the car there was a consensus that we should be heading back to Islamabad.

In the following week there were three blasts in Peshawar killing about one hundred and fifty people. The first attack was at all the All Saints Church, the second in a bus carrying government employees and the last at the market of Qissa Khawani. Only one week earlier we had driven through these areas, half fearful, half fascinated, forever praying that things could become less dangerous for the people of this benighted country.

Haroon Khalid is the author of A White Trail: a journey into the heart of Pakistan’s religious minorities