Pakistan State continues to have training camps (for terrorists) – alive, running, and kicking – in PoK, and has had them for the last couple of years, despite all their denials and their mocking of all evidence offered by experts and journalists.

A statement by the Tribunal of Perugia (sentence number Nr. 3213\2019 R.G. 30 June 2020) regarding a refugee case, says: “In the appeal it is deduced that Ali (surname not given for obvious reasons), was born and raised in Karachi, Pakistan, where he earned the title of mechanical engineer and worked as a freelance professional; that he is of Sunni Muslim religion, and in 2015, attended a course in which Islamic rules were imparted; in 2017 he went to Kashmir to attend a course of the aforementioned group; he was taken to a centre of training – the course consisted of physical training and use of weapons for the purpose of jihad. He finished the course and returned home. Subsequently, the Islamist group ‘Lashkar-e-Taiba’ asked him to join them. The applicant made excuses to reject the invitation; this drew their wrath. When he learned that they were planning his kidnapping, he decided to leave Pakistan for Italy”. 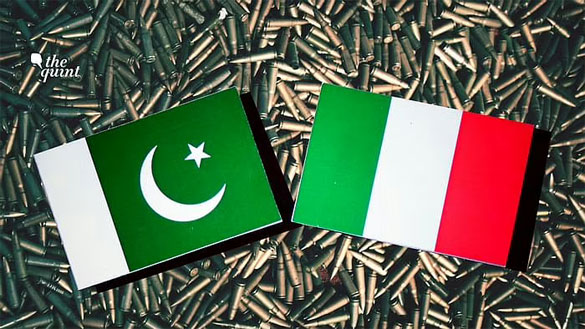 This, in the convoluted language of an Italian Tribunal sentence, is the story of Ali, who was recently granted ‘refugee status’ by a Tribunal in Perugia, Italy – and is an interesting story for many reasons.

According to Ali, he had joined an Islamic ‘integration centre’ in Karachi of his own will; went to Pakistan Occupied Kashmir to join a jihadi training camp of his own accord, and then, back in Karachi, LeT members had been trying to convince him to join their ranks. He had apparently already joined the group the minute he went to the training camp. When he tried to ‘give up’ jihad, according to his fantastic story, LeT and the ISI planned to kidnap him.

Alerted by a whistle-blower, he decided to flee to Italy where he asked for political asylum. A first sentence denied him any kind of asylum or refugee status because the story was – frankly – full of holes – but then the guy found a good lawyer, appealed against the sentence, and found a 'good' judge. Somebody even ‘reported’ his judgment on the Wikipedia page on the LeT, without further interrogation of the petitioner and without even considering the past cases in Italy.

The most well-known such case, about someone of Pakistani origin, is that of Hafiz Muhammad Zulkifal, the so-called ‘spiritual guide’ of a Lashkar-e-Taiba cell, who was arrested by the Italian police in 2015.

The imam lived with a large family in a small house in the Bergamo area. For the tax office, he had ‘no properties’, and his income ‘was not enough’ to support all his siblings, so he had been living off of Italian taxpayers’ money for almost twenty years, while preaching against ‘kafirs’ and the ‘western way of life’, and training a jihadi cell. Hafiz was getting state subsidies for the house rent, subsidies for the schooling of his children, in addition to the family bonuses for large families. And he is not the only one.

“Many Pakistanis who apply for asylum,” says a Pakistani journalist living in exile, “apply four or five times – giving different names each time. They arrive via Turkey or Greece and go directly to a refugee camp, without a passport, and without giving their real names. Families and smugglers advise them to talk as little as they can and to say they are being persecuted by the Taliban or other jihadi groups. Or to say they belong to a persecuted minority”.

“Truth is,” says one of the official cultural mediators at a refugee camp, a Pakistani himself, “They are all Punjabis, and I've never seen, except a few Ahmadiyyas, somebody belonging to a persecuted minority.” According to people living in the same refugee camp, they often attack individuals belonging to minorities and those they deem as ‘Kafirs’.

After asylum is granted, often on grounds of so-called ‘humanitarian reasons’, they join members of their family or their community. And this is how Italy – in all likelihood – gets its Lashkar-e-Taiba cells.

In 2016, a handful of Pakistani citizens were arrested and repatriated due to links with terrorist organisations. In 2019, a huge police operation in the north of Italy highlighted an 8 million Euro network of money illegally sent by a Pakistani to terrorist organisations in Afghanistan and Pakistan. According to reports from the Italian Intelligence: “Pakistani nationals arrived in Italy with no money on immigrant boats and with no significant economic background, and they suddenly became entrepreneurs.”

According to sources, these people, strictly with no criminal record, have been approached by members of the community, indoctrinated and then protected by foreign agents and placed into the Islamic community.

The same intelligence report highlighted that the funding, done by a Pakistani money sender, were intended “not only for radical Islamist jihadist groups acting against the West, but also for entities, supported by ISI, that operated and still operate in India.” Pakistani embassies refuse – more often than not – to co-operate with intelligence agencies and the police when asked to identify people; so, Italy remains a ‘privileged hub’ for jihadis and criminals.

Francesca Marino is a journalist and a South Asia expert who has written ‘Apocalypse Pakistan’ with B Natale.

(This is an opinion piece, and the views expressed above are the author’s own. The New Age Islam neither endorses nor is responsible for them.)

Original Headline: The Pakistan-Perugia Connection: How Italy Gets Its Lashkar Cells