In mid-March, Islamic State (ISIS) warned jihadis not to travel to Europe (“the land of the epidemic”) and advised any who were ill and already in Europe to stay there. The warning was issued through the ISIS newsletter Al-Naba and was widely reported in the West as a piece of rare good news amid the escalating Covid-19 crisis. 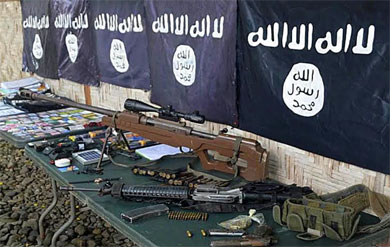 In this photo taken on November 26, 2015, weapons and ISIS flags recovered from members of a criminal gang who pledged allegiance to ISIS are displayed in Palimbang town, Sultan Kudarat province, on the southern Philippine island of Mindanao. Photo: AFP / STR

In one sense it is. The pandemic will present serious challenges to terrorist groups around the world and may well claim many recruits as victims, given how many of them live far from any medical infrastructure. There will be cells in countries across the Middle East and Europe for which nationwide lockdowns will heavily circumscribe movements – perhaps to the point of exposing terrorists to national intelligence agencies.

For those terror groups in ungoverned spaces – the hinterlands of the Sahel, Afghanistan and Syria – the sudden, rapid spread of the coronavirus poses a real danger. Social distancing is difficult for terror cells that work closely together, and getting medical assistance is hard when you are on the run from the authorities. The closing of borders means a halt to gathering recruits and dispatching operatives. And, to put it bluntly, fewer civilians in cities makes it harder to pull off an attack with high casualties.

On the other hand, the pandemic also is an opportunity. In a world suddenly changed, with cities in mass lockdown and even the most stable countries under stress, the spread of Covid-19 actually is a good-news story for terrorists. And groups such as ISIS are ferociously good at exploiting an opportunity.

Many governments are now fully preoccupied with the virus, making it easier to evade attention. But the real opportunity for groups like ISIS is in recruitment, both in the West and beyond.

Putting Western cities in lockdown means there is no outlet for entertainment, which results in millions more hours spent online, making it easier for ISIS and its remarkably sophisticated propaganda to radicalize the susceptible.

The sweeping regulations suddenly imposed by governments are fertile ground for breeding conspiracy theories, and in the confines of their own homes many more will be exposed to them, which will lead them to the intellectual ideas behind jihadism. Time spent online and a preoccupation with conspiracy theories are among the signs of radicalization that police in Western countries look for.

Another is distancing from friendship groups. Now governments are ordering us to do just that.

But the greatest opportunity for jihadists will come from state failure in poorer parts of the world. Time and again, ISIS has found its most fertile recruiting ground in areas already going through social and political change. It is politics that always opens the door to jihadism.

Let us not forget that the rapid growth of ISIS in Iraq came about because of fiercely sectarian policies by that country’s Shia-led government. It was state failure in the Sunni areas of western Iraq that first gave ISIS a foothold. The same thing happened from 2013 onward as the civil war escalated in Syria. Once again, the failure of the state opened up a path for ISIS to push through its message.

Today, the parts of the world where ISIS is expanding – particularly West Africa, Central Asia and the Philippines – are areas where the pandemic could easily cause widespread devastation.

In the Sahel, where the failures of the state have already alienated large parts of the population, and in the Philippines, where an insurgency rooted in social and economic grievances has become wrapped in militant ideology, the ISIS message is getting through. If state bodies cannot manage the pandemic, more people may well turn to the radical preachers.

Certainly, state failure is not only positive for jihadist groups. In Idlib, the last Syrian province outside government control, an outbreak of Covid-19 could shatter the authority of Hayat Tahrir Al Sham (HTS), the former al-Qaeda affiliate and the largest militant group in the province.

As with the Sahel and the Philippines, the real stress test is yet to come; Syria recorded its first coronavirus-related death only this week and it is not known if Idlib has any cases. But in an overcrowded region where clean water, shelter, food and medicine are in desperately short supply, the impact of an outbreak would be apocalyptic.

The blame for the subsequent deaths would fall on HTS, which, like ISIS before it, has sought to project the veneer of a functioning state. Widespread infections would expose that fake reality. The people would turn against HTS and perhaps even opt to take their chances under regime control.

Covid-19 has upended nations, but it has also upended those who want to attack them. Jihadism has proved itself to be frustratingly resilient, however, and historically, jihadists have proved themselves to be remarkably adept at capitalizing on the political failures of others. This latest global challenge is no exception. A pandemic that has already caused so many deaths could end up offering terrorist groups a new lease on life.