The Bride of the Desert, Palmyra, Is Not a War Trophy 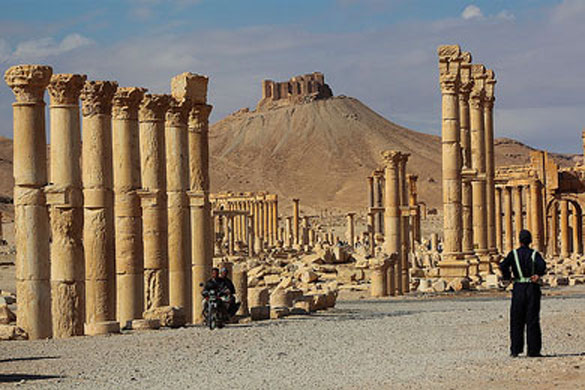 The Bride of the Desert

The Bride of the Desert has been fought over multiple times in her remarkable historical journey. Queen Zenobia held off the Romans until the latter sacked the city in 273. The remains of Diocletian’s Roman camp can still be seen on the edge of Palmyra.

The Timurids did likewise in 1400. Plundering and looting are part of the story of this oasis, perhaps not a surprise given that Palmyra has always been an oasis on a great trading nexus.

Today this much sought after piece of real estate has exchanged hands once again. Ten months after the hordes of ISIS somehow sneaked unnoticed by drones, satellites and spies across 130 miles of desert to take the city, it is back in the hands of the Syrian army after a tough three-week campaign albeit laced with a toxic residue of around 150 mines.

Its capture begs as many questions as its loss. Why did ISIS not blow up the remaining ruins that it had rigged? This is inspiring many to believe the rumours that a deal with elements of ISIS must have been concocted.

This prize possession, the Venice of the Sands, is once again being held up as a symbol of triumph and victory. President Assad received congratulatory phone calls from the likes of Vladimir Putin. Yet there was also a far from inaudible series of adulation from perhaps less likely sources.

Palmyra encapsulates so much that is wrong with this Syria conflict. Parties want to own and exploit the past and control the future

Donald Trump, who probably would not mind plundering an avenue of Palmyrene columns for his Trump hotel empire, sees this as evidence that he is right (as ever) to promote his line that Assad is better than ISIS approach. (This from a man who has claimed that the Middle East would be better if Saddam Hussein and Mu’ammar Gaddafi were still around)

Boris Johnson, the British Mayor of London with serious ambitions for becoming Prime Minister, had his George Galloway moment. “Bravo, Mr Assad”, he boomed in his Daily Telegraph column, echoing Galloway’s infamous saluting of Saddam Hussein, the Iraqi tyrant. Praising mass murdering dictators with a penchant for chemical weapons use should end political careers not further them.

Did he forget that it was under Assad’s rule that ISIS captured Palmyra in the first place? Putin had apparently demonstrated “ruthless clarity” in his support but yet again, is this something to be lauded?

Time To Celebrate? What For?

Of course, not everyone is least of all Syrians. If you trawl through the gigabytes of articles on the issue, the people of Palmyra are little better than footnotes. Does the outside world care at all? Do we know if Palmyrans they feel “liberated”? Who asks how many civilians were killed in all the fighting over the last ten months?

Boris Johnson urged Britain to pay for the restoration of Palmyra seemingly prioritizing that over rebuilding the hundreds of hospitals, schools and homes pulverized across Syria. It is a sickness of some in the West that they still crave the culture of the Orient - just without its people.

Palmyra encapsulates so much that is wrong with this Syria conflict. Parties want to own and exploit the past and control the future. For the regime and ISIS it is a naked battle for power, and the outside world picks its sides and arms its proxies. Each town and village captured or “liberated” is seen as some victory as fighters pose over the ruins of their success.

Putin and Assad will parade the taking of Palmyra as exhibit A in their political solution for Syria, that the Syrian army can act as the ground troops to partner Russian or other airpower against the evil of ISIS. Who will point out that many who orchestrated ISIS’s rise to power were released from Syria’s jails. It was the conflict itself that spawned the perfect breeding ground and habitat for ISIS. The cause of the conflict cannot be resuscitated as the cure.

So for sure, let’s be relieved that a significant amount of Palmyra’s inanimate treasures has survived, perhaps as much as 80 per cent. But let us not pretend that Palmyra and its people are safe yet either shifting from being controlled by one regime to another.

ISIS exacted its own bloody retribution on the people of Palmyra but the images of Syrian soldiers happily paraded severed heads of ISIS fighters is nothing to be proud of. The ruins of Tadmur prison, blown up by ISIS, have joined the ruins of antiquity but stand testament to the regime’s own appalling record.

The great Triumphal Arch of the city lies shattered on the ground. It should be a powerful sign that there are no winners and losers in this war, that there can be no triumph after so much loss.

Chris Doyle is the director of CAABU (the London-based Council for Arab-British Understanding). He has worked with the Council since 1993 after graduating with a first class honors degree in Arabic and Islamic Studies at Exeter University. As the lead spokesperson for Caabu and as an acknowledged expert on the region, Chris is a frequent commentator on TV and Radio, having given over 148 interviews on the Arab world in in 2012 alone. He gives numerous talks around the country on issues such as the Arab Spring, Libya, Syria, Palestine, Iraq, Islamophobia and the Arabs in Britain. He has had numerous articles and letters published in the British and international media. He has travelled to nearly every country in the Middle East. He has organized and accompanied numerous British Parliamentary delegations to Arab countries. Most recently he took Parliamentary delegations to the West Bank in April, November, December 2013 and January 2014 including with former British Foreign Secretary Jack Straw.